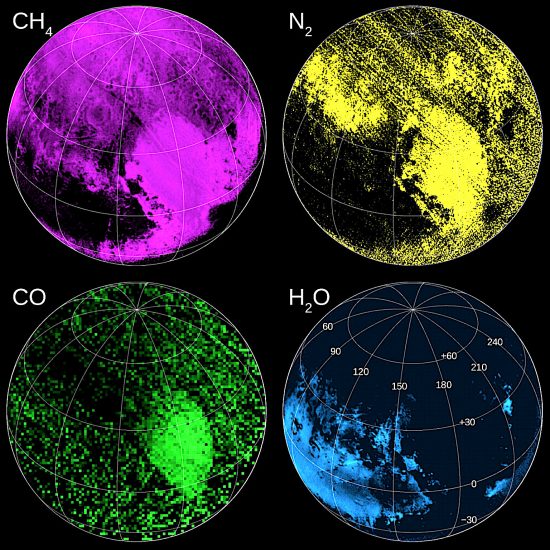 Is Pluto a cometary body?

According to a recent press release, Pluto might be composed of a “billion comets”. As Dr. Christopher Glein of SwRI’s Space Science and Engineering Division wrote:

“We’ve developed what we call ‘the giant comet’ cosmochemical model of Pluto formation. We found an intriguing consistency between the estimated amount of nitrogen inside the glacier and the amount that would be expected if Pluto was formed by the agglomeration of roughly a billion comets or other Kuiper Belt objects similar in chemical composition to 67P, the comet explored by Rosetta.”

Clyde W. Tombaugh discovered Pluto on February 18, 1930. Prior to that observation, Percival Lowell thought another celestial body ought to exist beyond Neptune, because “something” affected his orbital calculations—there was a “pull” on both Uranus and Neptune. Similar orbital anomalies allowed Urbain Le Verrier to predict the existence of Neptune, so Lowell’s assumptions about “Planet X” were correct, although he never found it. After Tombaugh’s discovery, an 11-year-old girl named Venetia Burney suggested that Planet X be called “Pluto” after the Roman god of the dead. “Cronus” and “Minerva” were in the running, but her submission was the only one to receive any votes.

Pluto is in a highly eccentric orbit. Aphelion is 7.3 billion kilometers from the Sun, while perihelion brings it no closer than 4.4 billion kilometers. One revolution takes about 248 years. The last time Pluto was in the same place in its orbit as it is now was six years before the American war for independence in 1776.

As discussed in previous Pictures of the Day, there are several moons orbiting Pluto. Charon is the largest of them, at 1172 kilometers. It is followed by Styx, Kerberos, Hydra, and Nix. Pluto and Charon orbit a common barycenter, so the other four moons are circling the pair. The RALPH instrument (named after Alice’s husband in the television show, “The Honeymooners”) was able to resolve features on Pluto that are about a city block in size. Pluto resembles other rocky bodies much closer to the Sun. Gas giant moons experience similar temperatures, and could also have been exposed to the same kind of formative processes that created Pluto.

The geology of Pluto reveals chains of craters and melted pits extending outward from terraced depressions. Flat bottoms and vertical sidewalls are signs of electric discharge machining. Indeed, the indications are that electricity sculpted Pluto’s surface.

As mentioned, Pluto resembles its sister moons and dwarf planets. There are steep-walled craters with flat floors, hexagons, thousand-kilometer trenches, hectares of pits, craters on the rims of craters, and other features that mark Pluto as an electrically devastated world. That wholesale destruction took place sometime in the past, though, leaving Pluto a frozen wasteland.

Pluto has no magnetosphere, no strong electrical connection between Pluto and the Sun exists, so there is no shield between it and solar wind ions. Pluto sports a long tail composed of heavier, ionized atmospheric gases―primarily methane, with a “thin” magnetopause. The so-called “Plutopause” is the boundary region between solar plasma and Pluto’s feeble electromagnetic field, so its equipotential surface is small.

Rather than a conventional slow, cold process of development, Electric Universe theory sees Pluto in the same way as it does other Solar System inhabitants: an electrically constructed world, with forensic evidence of subsequent (or, possibly, incipient) devastation.