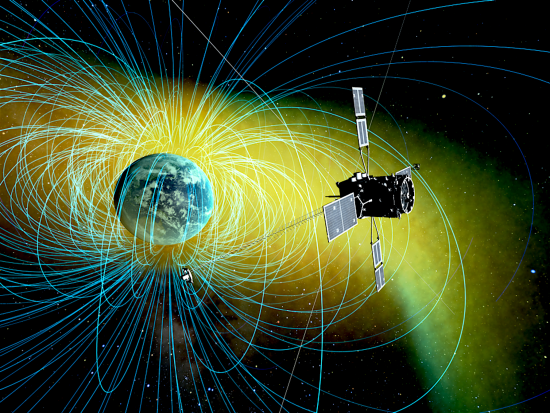 Oh, it was wild and weird and wan, and ever in camp o’ nights
We would watch and watch the silver dance of the mystic Northern Lights.
And soft they danced from the Polar sky and swept in primrose haze;
And swift they pranced with their silver feet, and pierced with a blinding blaze.
They danced a cotillion in the sky; they were rose and silver shod;
It was not good for the eyes of man — ‘Twas a sight for the eyes of God.
— Robert Service

An electrically active structure called the magnetotail extends outward from Earth for millions of kilometers into space. Ions streaming from the Sun, conventionally called the solar wind, are captured in Earth’s magnetosphere and accumulate in a plasma sheet, where they are held together by Earth’s magnetic field. When the solar wind particles are guided down into the polar regions, collisions with atmospheric molecules raise their energy states, causing them to emit red light from oxygen at high altitudes, green light at lower altitudes and blue light from nitrogen.

Electromagnetic “knots” travel along with plasma jets through the magnetotail. Whenever a jet reaches the magnetotail’s inner boundary, plasma instabilities are generated. Arctic radar stations often detect return signals from plasma streams in the upper atmosphere just before aurorae collide.

According to a recent press release, it is “reconfiguration” of magnetic field lines that is responsible for this phenomenon. Satoshi Kasahara from the University of Tokyo wrote:

“Auroral substorms … are caused by global reconfiguration in the magnetosphere, which releases stored solar wind energy.”

In other words, magnetic reconnection rears its ugly head out of misguided theories. It is not the intent of this paper to rehash the problems with magnetic reconnection. Readers can find the complete Electric Universe proposition that takes issue with the theory by considering retired Professor of Electrical Engineering, Dr. Donald Scott’s presentation about Birkeland currents.

Electric Universe proponents are familiar with auroral substorms, since one of the founders of plasma physics, Kristian Birkeland first described them. Birkeland’s Arctic expedition found electric currents from the Aurora Borealis flowing parallel to the aurora. Since electric charge must move in a circuit, he proposed that the electricity came down from space at one end of the auroral arc and went back out to space at the other. Since then, it is confirmed that one plasma sheet descends from the morning side of the aurora and the other ascends from the evening side. Those field-aligned currents linking Earth with space are called Birkeland currents.

Physicists from the University of Tokyo and JAXA, the Japanese space agency, also announced that they observed electron excitation from “chorus waves” in the upper atmosphere contributing to auroral pulsations. Chorus waves are also called “whistlers”. Radio speakers reproduce them as chirps, clicks, descending arpeggios and other musical sounds.

Birkeland’s polar electric currents are now called “auroral electrojets”, and, as mentioned, are connected to a flow of electric charge that follows Earth’s geomagnetic field into and away from the polar regions. Although the words “plasma” and “currents” are used in the press release, they are coupled with “rain”, “collisions” and “streams”.

As discussed in previous Pictures of the Day, space scientists are reversing cause (electric currents) and effect (magnetic fields). They downplay or deny the importance of electrical processes and ignore the work of plasma pioneers like Kristian Birkeland. “New discoveries” are really confirming the experiments done by others more than 100 years ago.