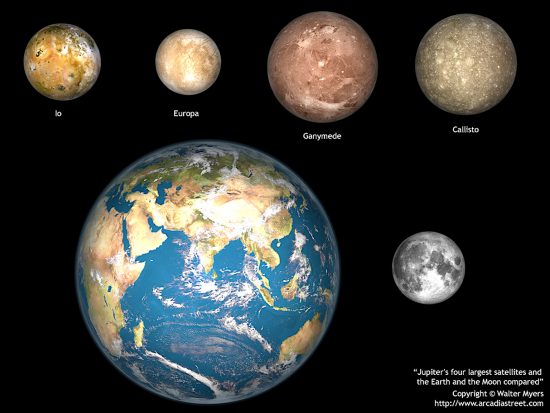 A scale comparison of the Earth, the Moon, and the Galilean Moons. Credit: NASA/Walter Mysers. Click to enlarge.

The Space Shuttle Atlantis launched the Galileo spacecraft on October 18, 1989. After a six year flight, Galileo entered orbit around Jupiter on December 7, 1995. After eight years in orbit, Galileo was burned up in Jupiter’s atmosphere, in order to prevent it from crashing into any moons, particularly Europa.

In 1979, Voyager 1 found that Europa was, apparently, encased in water ice, with almost no craters. Thousands of channels, called “rilles” mar its face. “Fault” ridges mystified NASA mission team members and continue to do so. Europa is extremely cold, with a mean temperature of −160 Celsius at the equator and −220 Celsius in the polar latitudes. At that temperature, water ice has a tensile strength equivalent to some of the hardest rocks on Earth and contributes nothing to any chemistry. Although, astrophysicists speculate that there is a salty ocean under the ice, because computer simulations indicate that Europa has a thick shell of water ice floating on top of the conjectural sea.

Planetary scientists believe that the moon is “stretched” by Jupiter’s immense gravity, creating stress cracks and large ice rafts. The rafts are thought to float on the subsurface water; merging and separating because of the moon’s hot interior, conventionally attributed to Jupiter’s tidal force.

“Cracking” remained the official interpretation even as, beginning in 1996, higher resolution images undermined the idea. Many of the larger channels are smooth; they do not look like fractures. Whatever created them disregarded the presence of prior channels and often produced a constant channel width for up to a thousand kilometers, or more.

How can colliding ice rafts form parallel grooves with levees many meters high? Europa’s rilles cannot be analogous to ice cracks on Earth, since variations that repeat over long distances should not be expected. Yet, repetitive patterns on Europa can be duplicated in the laboratory with plasma discharge equipment.

Electric Universe theory suggests that rilles are caused by traveling electric arcs. Europa was gouged and torn, instead of cracked and broken. An electric auger cut across the surface, disregarding the topography. Europa’s rilles show parallelism (a sign of electrical activity), not because they are open cracks, but because filaments of electric charge traveling across a surface tend to align and follow the ambient magnetic field direction. From an electrical viewpoint this is not surprising. The current  of an electric discharge, flowing across the surface, has an associated magnetic field that “pinches” it into a thin filament, tending to draw concurrent filaments into parallel alignment.

Electrical activity between Jupiter and Europa is now acknowledged, because the “footprints” of all four of Jupiter’s large moons were seen in its aurora.

There are regions on Europa with massive fracturing, and it is evident that whatever shattered extensive layers of ice also caused breaks and movement along some pre-existing channels. However, channels with no evidence of fracturing are far more abundant. Complexes of parallel and side-by-side grooves with levees and no indications of fracturing are also abundant. Can ice be broken over and over again in ways that create parallel grooves with levees? There is nothing in nature or in controlled experiments to support that idea.

There is a model that does account for the appearance of Europa. The colossal scale of its ridges reveals the nature of the channels. They are not cracks in the ice. They are overlying and intersecting V-shaped troughs. The dark coloration down their centers appears in many places to be comprised of a string of small craters with dark material.

The V-shaped configuration is consistent with a line of powerful underground explosions creating conical vents.  A narrow discharge channel moving explosively beneath the surface throws material above it onto the two sides of a V-cross-section trench. In the electrical interpretation, the narrow lines of dark material at the base of the channel mark out the discharge—smashing oxygen atoms, two by two, into atoms of sulfur. The lighter material was the ice above the discharge channel, blown to the two sides of the channel,

A close inspection of such regions will verify that Europa’s rilles are similar to those on other planets and moons. If Electric Universe theory is correct, traditional geologic models based on slow processes occurring on Earth will invariably fail.