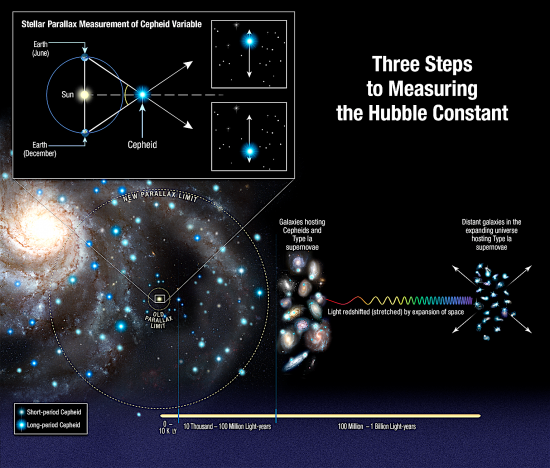 How astronomers measure the Hubble constant. Credits: NASA, ESA, A. Feild (STScI), and A. Riess (STScI/JHU). Click to enlarge.

In 1997, two teams of astronomers studying Type 1a supernovae found there was “something wrong” with their observations.

Type 1a supernovae are a sub-class of stellar explosions involving binary stars, but they are thought to occur through a different process. Their particular way of exploding is still considered a mystery in astrophysical circles.

Adam Riess and Saul Perlmutter were studying Type 1a supernovae, because they are considered “predictable”: their fluctuating magnitudes are supposed to be reliable indicators of a supernova’s true brightness. By calculating redshift, they can place them in space-time coordinates and find out how far away they are.

Riess and Perlmutter were shocked to discover that the most distant Type 1a supernovae were accelerating. Not only that, the farther away they were, the faster they were speeding up. The effect was called “dark energy”, because no apparent cosmic influence could be seen. As time went on, new observations by various groups resulted in the conclusion that dark energy makes up 75% of the Universe.

A supernova is conventionally thought to be a massive star at the end of its lifecycle. Since stars are primarily composed of hydrogen, interior nuclear reactions fuse it into heavier elements: first helium. Then, when core temperatures reach about 100 million Kelvin, helium’s kinetic energy is strong enough to overcome electrostatic repulsion, so it fuses into carbon-12; in a so-called “triple alpha process“. After carbon-12, other exotic fusion reactions occur, until nickel-62 nuclei begin to accumulate. Nickel-62 has the highest binding energy of any element, so it can not fuse, no matter how hot the stellar core.

This heavy “ash” halts fusion, so radiative pressure cannot hold back the force of gravity that always wants to crush stars. Therefore, stellar outer layers catastrophically collapse, rebounding off their cores out into space in what astronomers call supernovae explosions.

Many previous Pictures of the Day point out that stars are not balls of gravitationally compressed hot gas, they are composed of plasmas. Plasma is ionized, meaning that it is electrically charged. Plasma does not behave like a pressurized gas, it behaves according to the tenets of plasma physics.

Laboratory experiments confirm that electricity flowing through plasma forms regions separated by thin walls of opposite charge called double layers. This is the “charge separation” so often mentioned in these pages. Could charge separation cause electrical explosions known as supernovae?

Supernovae are, indeed, “exploding stars”. However, in electrically charged plasma stars, those explosions are due to the breakdown of double layers. The power that fuels stars comes from external currents of electric charge flowing through vast circuits in space. Rather than “core rebound”, supernovae result from “circuit breakers”, where stored electromagnetic energy is suddenly focused at one point.

When a star’s double layer explodes, electrical energy from its stellar circuit flows into the explosion. The resulting radiation glows across the entire spectrum from radio to gamma rays. The unexplained “standard candle” attribute of Type 1a supernovae has a plausible explanation—a star’s electrical environment.

Since stars can be thought of as the focus for immense energy from the galaxies in which they live, their activity cannot be based on whether they possess a certain mass, or a particular elemental constitution. Rather, they are not internally powered objects at all; they are bodies formed electromagnetically where gigantic plasma filaments have squeezed matter in what is called a “z-pinch”. That is how stars are born and that is where the seeds of supernovae are planted.

“The remarkable brilliance of a supernova, which can exceed that of its host galaxy for days or weeks, is explained by the kind of power transmission line failure that can also be seen occasionally on Earth. If such a circuit is suddenly opened, the electromagnetic energy stored in the extensive circuit is concentrated at the point where the circuit is broken, producing catastrophic arcing. Stars too can ‘open their circuit’ due to a plasma instability causing, for example, a magnetic ‘pinch off’ of the interstellar Birkeland current. The ‘standard candle’ effect and light curve is then simply due to the circuit parameters of galactic transmission lines, which power all stars.”