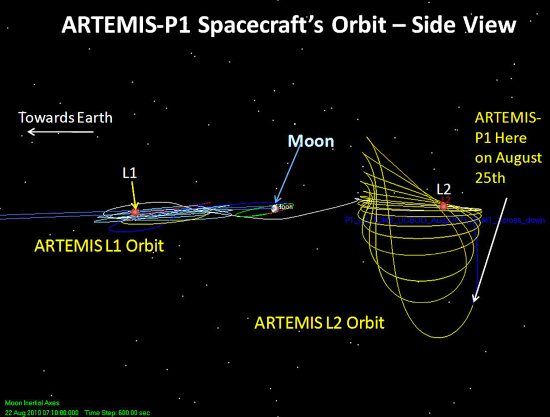 Magnetic reconnection is in the news again.

On February 17, 2007 NASA launched the The Time History of Events and Macroscale Interactions during Substorms (THEMIS) on a mission to study Earth’s aurorae. The fleet of five satellites monitored changes in auroral brightness and morphology, in order to determine how the magnetosphere connects with the Sun, and what effects that phenomenon might have on the near-Earth electrical environment.

As previous Picture of the Day articles discussed, THEMIS found “space tornadoes”, plasma vortices rotating faster than 1,600,000 kilometers per hour, about 64,000 kilometers from Earth. The discovery that those charged plasma formations are directly coupled to the ionosphere led to an undeniable conclusion: the Sun influences lightning in thunderstorms and weather, in general.

The THEMIS mission was repurposed in 2010, leaving three of the satellites in Earth orbit, while sending two others further on to the Moon. Known as Acceleration, Reconnection, Turbulence and Electrodynamics of Moon’s Interaction with the Sun (ARTEMIS), the two spacecraft measure the Sun’s effect on a body with no magnetic field.

Earlier missions, such as Clementine, detected a high voltage differential during each full Moon phase as the Moon passed through Earth’s magnetotail, a part of the plasma sheath that envelops our planet. Earth is encompassed by an electromagnetic field stretching well beyond the Moon’s orbit. The ion stream that emanates from the Sun (the solar wind) repels charged plasmas within the magnetotail, forming a magnetic “shell”. The plasma sheath changes shape because of somewhat regular oscillations in the Sun’s emanations. This means that the Moon experiences electric charge fluctuations during each monthly encounter. ARTEMIS is cataloguing those fluctuations and correlating them with putative “magnetic reconnection” events.

Heliophysicists believe that Earth’s magnetic tail “stretches like a windsock”, becoming so “tension-filled” that it “snaps like a rubber band”, causing magnetic field lines to “reconnect”, releasing magnetic energy in the form of heat and light. They believe that such events cause the auroral phenomenon when they “fling” charged particles from the magnetotail back into the atmosphere. A recent publication attempts to justify magnetic reconnection with ARTEMIS data.

Retired Professor of Electrical Engineering, Dr. Donald Scott, explained that magnetic field lines are schematic diagrams that indicate an electromagnetic field’s direction and are used to visualize that field’s shape and strength. They do not exist in the real world just as lines of latitude or longitude are not delineated across Earth’s surface.

Magnetic field lines cannot move, since the field is continuous. Conventional science ignores that fact. Astrophysicists speak of lines that can touch, merge, and “detonate.” If that idea were applied to circles of longitude, those diagrams would “merge” in the polar regions, and could be theorized as the source for gravitational energy.

There is no such thing as “magnetic merging” or “reconnection” of magnetic field lines. The energy comes from electric currents, which can move, merge, and detonate. The theory of magnetic reconnection and its associated consequences is a mystery to Electric Universe proponents. How did science lose its way in such a dramatically ignorant fashion? When did illustrations become reality?