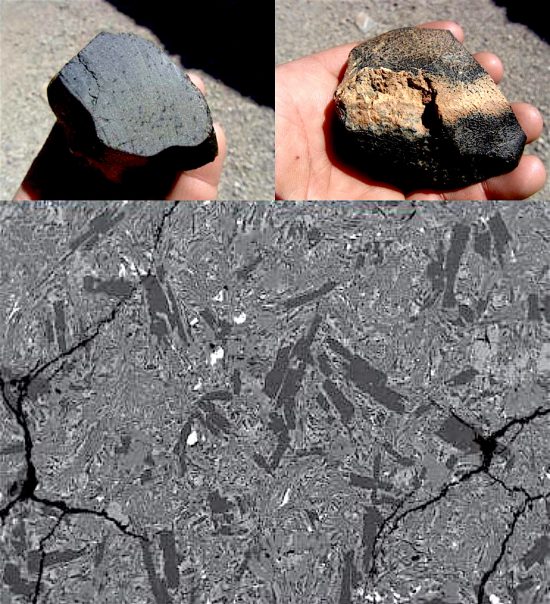 Martian meteorites are most likely a few thousand years old, at most.

The Martian lithosphere is composed of iron and silicon, although they are primarily bound with oxygen. Silicon dioxide and iron oxides are the main constituents of Martian regolith. The atmospheric density on Mars is 0.6% that of Earth, so it is equivalent to a mountain six-times higher than Everest.

Planetary scientists speculate that there was once an oxygen-rich atmosphere that caused the “rusting” of iron in its crust, as well as the formation of vast sandy deposits. They also believe that oceans of water contributed to the formation of hematite nodules, otherwise known as “blueberries”, that blanket almost an entire hemisphere. There are hematite dunes on Mars more than a kilometer high, along with magnetite ripples that cover crater bottoms, and accumulations of hematite dust swallowing craters a hundred kilometers in diameter.

All of those different oxides indicate that something once took place on Mars that is not taking place on any large scale today. When that past environment came to an end is not known, but a recent press release states that Mars might have once been a geologically active world. A Martian meteorite found on Earth suggests that volcanic activity on the Red Planet might have lasted for over a billion years.

Northwest Africa 7635 was found in 2012, but eleven others, with similar composition, were also discovered in the past. The dating methods used by geologists indicate that the meteorite is 3.4 billion year old magma ejected from Mars by the impact of a large asteroid on or near Olympus Mons.

The problems with dating rocks and the erroneous conclusions reached because of those methods is not the subject of this paper. Suffice to say, how material from other planets found its way to Earth is most likely not due to mechanical impacts from large rocks. The age of that material most likely does not conform to a “true” age, since electrical effects can alter mineral structures, as well as introduce radiation into the matrix. Both of those effects will create anomalous readings. This is borne-out by the fact that no Martian meteorites are found that are younger than a few million years. Is that because of the dating methods? Or is it because there are no large asteroids hitting Mars at the present time?

On Mars, many other features do not correspond with contemporary theories about their evolution. For example, there are dunes that do not align with the prevailing winds, and that do not show any movement despite many years of observation. On the slopes of Olympus Mons, where Northwest Africa 7635 is supposed to originate, are large holes that appear to be hundreds of meters deep. On Earth some volcanoes have similar “pit craters” on their flanks. They are not associated with fumaroles or lava chambers, so they are thought to be from collapsed gas pockets. However, since plasma activity is involved with volcanic eruptions on Earth, it should also be considered when dealing with Mars.

According to consensus theories about the history of Mars, the last volcanic eruptions took place billions of years ago. If the Martian “skylights” are that old, surely they would not look like they were dug into the surface a short time ago.

As written elsewhere, Olympus Mons has all the characteristics of a lightning blister, or fulgamite, but on an incredible scale. If small blisters have been found on lightning rods after a lightning strike on Earth, one can imagine the size of the burst that hit Mars and formed the Tharsis Montes volcanoes – Olympus Mons in particular. The giant mound is covered with raised dendritic ridges flowing down its sides like hardened Lichtenberg figures. The caldera chiseled out of its summit is unlike the volcanic vents found anywhere on Earth – the same dendritic ridges outlining its foundation are also molded into those cliff faces.

Dating a rock that was exposed to violent electric discharges and then ejected into an orbit that eventually landed it on Earth is impossible. It is just as probable that Northwest Africa 7635 is a relatively recent arrival and not an ancient relic.