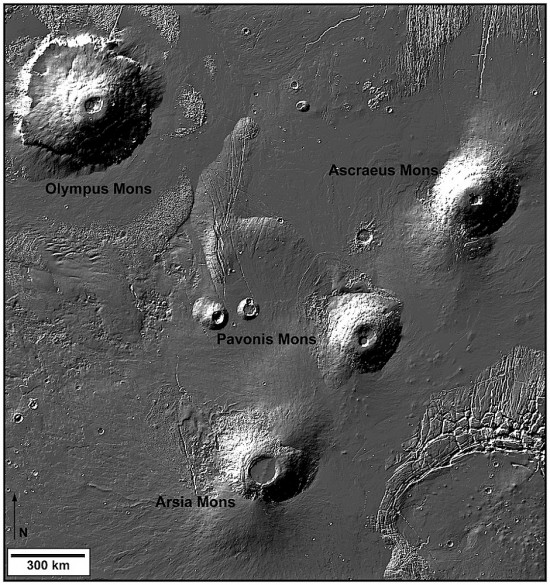 Volcanoes on Mars should not be found in chains, since no crustal plate movement exists either there or on Earth.

According to a recent press release, Mars experiences plate tectonics, just like Earth does. As An Yin, a UCLA professor of Earth and space sciences wrote: “Mars is at a primitive stage of plate tectonics. It gives us a glimpse of how the early Earth may have looked and may help us understand how plate tectonics began on Earth.”

This research corresponds to other theories from planetary scientists at the University of Arizona and the Goddard Space Flight Institute, who previously reported that the volcanoes located in the Tharsis Montes region on Mars might not be extinct after all. Because the four gigantic craters are near one another and three of them run in a chain, scientists think that they must have been created in the same way that standard theories explain crater chains.

According to the lead author of a paper that appeared in Geophysical Research, Olympus Mons, Ascraeus Mons, Pavonis Mons and Arsia Mons could have a moving column of magma beneath them.

Volcanoes on Earth form when the plates that make up the Earth’s crust move over upwelling magma plumes, as theories maintain. Rising magma naturally seeks out the weakest fractures, allowing it to erupt onto the surface, or under the ocean. Island chains may appear if enough lava deposits build up and create steep-sided mountains whose peaks break the waves.

On Mars, however, there is no evidence that the crust moves. No plate boundaries exist, despite the speculation of Dr. An Yin, who bases his theory on the Valles Marineris canyon system. Previous Picture of the Day articles stress that Valles Marineris is an electrical scar, and does not adhere to common interpretations of canyon formation on Earth.

In order to explain the Tharsis anomaly, the authors of the Geophysical Research paper postulate that the plume of magma is what moved rather than the crust.

“We thought we could take what we learned about lava flow features on Hawaiian volcanoes and apply it to Martian volcanoes to reveal their history. The problem was that until recently, there were no photos with sufficient detail over large surface areas to reveal these features on Martian volcanoes. We finally have pictures with enough detail from the latest missions to Mars, including NASA’s Mars Odyssey and Mars Global Surveyor, and the European Space Agency’s Mars Express missions.”

Now, with information from the Mars Reconnaissance Orbiter, those ideas about lava flows have been permanently discounted. The same principle of using Earth geology to explain Martian areology is what causes researchers to misconstrue what it is they are seeing when they examine images of Valles Marineris.

In previous Thunderbolts Picture of the Day articles about the Martian volcanoes, Olympus Mons in particular, we theorized that the shape of the escarpments and the surrounding topography indicates that they could have been made by enormous plasma discharges that impacted the planet. The force of the electric current raised the giant mounds and carved out their distinctive calderas.

“Olympus Mons, 25 kilometres high, is NOT the highest volcano in the Solar System. It is a giant raised electrical blister with characteristic superimposed circular craters at the summit. It is the kind of blister seen on metal lightning arrestor caps after a strike.”

If electric currents of such magnitude influenced the planet Mars on a global scale, could they have done something similar on Earth? Is it the theory of plate tectonics and its relationship to volcanism on our planet that should be reconsidered, rather than inventing a new theory because new observations do not support the old one?