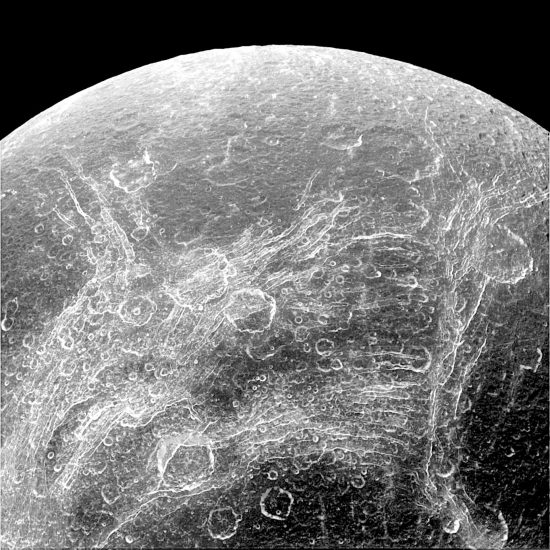 Another of Saturn’s moons appears to be all wet.

Quickly, bring me a beaker of wine, so that I may wet my mind and say something clever.
—Aristophanes

According to a recent press release, Saturn’s moon Dione shares a “decoupled” crust “floating” on a subsurface ocean with the tiny moon, Enceladus. As the announcement states:

“[Enceladus’] south polar crust is only 7±4 km thick, facilitating the opening of water conduits and enhancing tidal dissipation through stress concentration. Enceladus’s resonant companion, Dione, is in a similar state of minimum stress isostasy. Its gravity and shape can be explained in terms of a 99±23 km thick isostatic shell overlying a 65±30 km thick global ocean, thus providing the ﬁrst clear evidence for a present-day ocean within Dione.”

As mentioned in a previous Picture of the Day, Dione is an active world, similar to Enceladus, spewing streams of particles into the plasmasphere of Saturn. On Dione, several bright cliffs are visible, wrapping around it and extending for many kilometers. In a flyby animation, the camera focuses on those features, revealing their braided shapes that often cut through craters and intersect other cliffs. Dione has no atmosphere and is only 1126 kilometers in diameter, so it was thought to be geologically inactive. Later, plumes of charged particles were found erupting from a number of hot spots on its surface.

In the Electric Universe hypothesis, those plumes are plasma discharges that are ejecting material into space, just as on Jupiter’s moon Io. It is likely that conditions existed in the past where that activity was much more energetic, forming the etched terrain that is visible today.

The grooves and canyons run parallel to each other. They have sharp rims and begin abruptly with no eroded appearance. They have side canyons running off at ninety-degree angles and craters along their lengths, often in chains. The craters are shallow with no debris around them and have central peaks similar to craters found on Earth’s Moon and on other planets, such as Mars. In past Picture of the Day articles, such formations have been identified with electric discharge machining.

Saturn’s moons orbit within its plasmasphere and exchange electrical energy with one another, so electricity must be considered whenever unusual morphology is observed. Translating earthly geologic forces and the slow progress of erosion onto the appearance of the other planets and moons misses the point. Wind and rain erode our planet and presumably create canyons and valleys. When no wind or rain exists–such as on Dione–how to explain the fresh looking and unique topography that defies convention? Should the assumption that wind and rain, alone, have sculpted the Earth also be questioned?

The Cassini spacecraft’s exploration of Saturn’s environment will soon come to an end. However, the collected data will be analyzed for years to come. It is predicted that more details will reveal that its moons have experienced what might be called, “catastrophic” events in the past. So-called “tidal kneading” from Saturn is insufficient when considering Dione’s overall appearance and activity. Only its electrical connection with Saturn and its sister moons can explain Dione’s morphology. Rather then being all wet, Dione is most likely a frigid wasteland.