Home Picture of the Day 174P/Echeclus 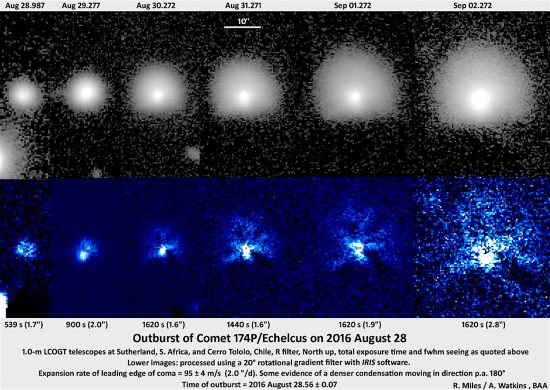 “The EU model predicts that all active comets will exhibit frequent, short outbursts in different spots on their surfaces. The outbursts happen because they are electrical discharge phenomena, known technically as (cold) cathode jets.”
— Wal Thornhill

It is surprising that astrophysicists remain ignorant when it comes to comets. Each mission found them to be hot, dry, and rocky. The surprise is really that they continue to talk about snowballs and frozen volatiles, especially after the successes and failures with the Rosetta Cometary Probe.

An electric comet theory would explain observations better than the current theory that sees cold, inert celestial bodies sleeping in cryogenic suspension until the Sun warms them up. A theory that embraces electricity in space was first proposed by the late Ralph Juergens in the early 1970s. Following his death in 1979, Dr. Earl Milton, along with Wal Thornhill, continued working on the premise. Thornhill’s first article about electrically active comets appeared on his website in October 2001, which also included a response to the Deep Impact mission’s predictions. After the Stardust mission encountered comet Wild 2, he published more evidence that suggested electric comets in January 2004. He reported a contradictory view of Deep Impact’s results in July 2005.

“It is an assumption,” Thornhill insists, “that it is formed by the breakdown of H2O ‘vapor’ by solar UV radiation.”

As long as the outmoded water ice model continues to predominate, those studying comet phenomena will announce “mysteries” and “surprises”. For example, according to a recent press release, astrophysicists studying comets announced that 174P/Echeclus does not “… behave the way the team was expecting.” Professor Maria Womack wrote:

“This is another clue that Echeclus is a bizarre solar system object.”

Comets are not bizarre in the context of electric comet theory. When spacecraft visit cometary nuclei they are found to be black and burned, with craters and rocky terrain instead of ice. Jets, ion tails, sulfur compounds that only form at high temperature, and dust all point to electricity as an active agent. When water vapor was detected, it was found far away from the comet nuclei instead of close in. That is contrary to expectations if water ice and sublimation drive comet phenomena.

Picture of the Day articles tend to contradict the snowball theory. For example, some comets exhibit comas and tails when they are far from the Sun, like the cometary asteroid, 174P/Echeclus. If the Sun causes frozen volatiles to sublime and form jets, then comets near Jupiter should not exhibit those features.

Electric Universe theory sees comets as debris ejected from catastrophic events on Earth and other planets. This means that there could be comets in the Solar System that are made of rocks and water ice, since ocean water could have been explosively launched into solar orbit at the same time as chunks of rock. However, no water-based objects are observed. Every visit to comet nuclei revealed dust and rocky regolith.

Since comets are negatively charged, and the solar wind carries a slightly positive charge, negative ions close to comet nuclei are accelerated away in the aforementioned cathode jets. Those ions recombine with solar wind protons, forming OH radicals, OH does not need to result from water vapor dissociation.

As mentioned in a previous Picture of the Day, Centaur objects, like 174P/Echeclus, exhibit an indeterminate state between comet and asteroid. 174P Echeclus displayed a coma in 2005, so it is known as a cometary asteroid. At least ten Centaurs demonstrate cometary activity.

Asteroids and comets exist in a continuum: neither are strictly identical, nor completely different from the other. When the Stardust mission returned samples from comet Wild 2, the material looked more like meteoric dust than what was expected from a dirty snowball.