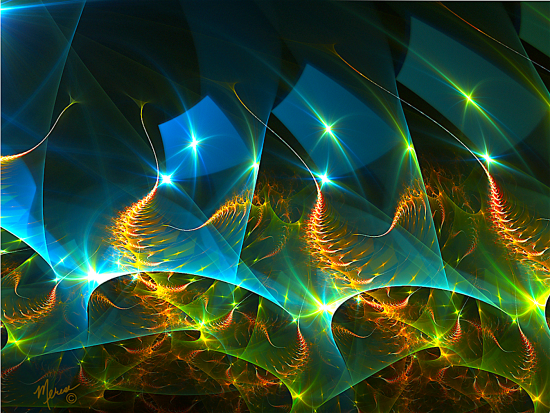 “Aurora Borealis” by justravelin at DeviantArt

The aurorae are not powered by magnetic reconnection.

Earth’s northern lights both puzzle and entrance observers. Pierre Gassendi, in 1621, called the curtains of light in the north the Aurora Borealis after Aurora, the Roman goddess of dawn, and Boreas, the Greek name for the north wind.

A complex electrically active structure called a magnetotail (or plasma tail) extends for millions of kilometers from Earth, always pointed away from the Sun. Charged particles from the Sun, conventionally called the solar wind, are captured by the magnetosphere, and along with ions generated by Earth, collect in a plasma sheet within the magnetotail, where they are held together by Earth’s magnetic field.

Solar ions follow Earth’s magnetic field down into the poles, causing atmospheric molecules to emit light: red from oxygen at high altitudes, then green from oxygen lower down, along with blue from nitrogen.

According to a press release from NASA’s Time History of Events and Macroscale Interactions during Substorms (THEMIS) mission, large areas of the Aurora Borealis are sometimes seen to create intense bursts of light called substorms. As the announcement states, “…plasma energy dissipation is controlled by field-aligned currents (FACs) produced and modulated during magnetotail topology change…”

“Knots” of electromagnetic energy move in conjunction with plasma jets traveling through the magnetotail. Plasma waves and instabilities are generated when the jet reaches the magnetotail’s inner boundary. Radar stations in Alaska and Greenland have detected return signals from streams of plasma in Earth’s upper atmosphere just before the aurorae collide.

To anyone familiar with Electric Universe theories, “field-aligned currents” is another name for Birkeland currents.

Strong electromagnetic disturbances are observed when bright aurorae are seen. In 1903, Kristian Birkeland’s Arctic expedition discovered that electric currents from the Aurora Borealis flowed parallel to the auroral formation. Since electric currents move in a circuit, and since the auroral glow seemed to be caused by events in space, he proposed that the currents flowed down from space at one end of the auroral arc and back out to space at the other.

In 1973, the magnetometer aboard the U.S. Navy satellite Triad found two gigantic electric current sheets carrying a million amperes or more. One plasma sheet descended from the aurora’s morning side and the other ascended from the evening side. Since Birkeland’s research predicted those currents linking Earth with space, they are called Birkeland currents.

Today, Birkeland’s polar electric currents are known as auroral electrojets; they are connected to a flow of electric charge that follows Earth’s geomagnetic field into and away from the Arctic region. They are the “new” discovery made by NASA scientists who continue to ignore Birkeland’s work. Although the words “plasma” and “currents” are used in the press release, they are coupled with “impacts,” “collisions,” and “streams.”

As discussed in a previous Picture of the Day, how that energy is released, as well as what starts the process, are still controversial subjects. Energy in nature cannot be destroyed, as the conservation of energy law states. When electricity powers a motor, it is converted to kinetic energy. When friction stops motion, its kinetic energy converts to heat. Consensus theories state that magnetic energy also reappears in different forms. Some becomes heat, increasing the velocity of plasma ions and electrons. Some changes to visible light.

It seems that space scientists are reversing cause (electric currents) and effect (magnetic fields). They downplay or deny the importance of the electrical processes and ignore the work of plasma pioneers like Kristian Birkeland. “New discoveries” are really confirming the experiments done by others more than 100 years ago.