Home Picture of the Day Curiouser and Curiouser 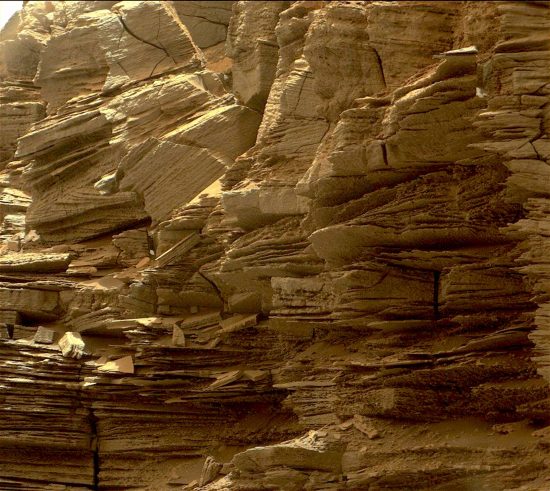 Mars is not a dried-out museum of life.

“When dealing with other worlds, we must take care to remember that unfamiliar processes are possible and even likely in alien environments.”
— Colin Dundas of the U.S. Geological Survey’s Astrogeology Science Center

Mars is a freeze-dried wasteland of rocks and dust, with no signs of life in any form. It is presumed by consensus scientists that any water there evaporated millions of years ago, leaving formations created by water high and dry. The Mars Global Surveyor mission’s extremely high resolution cameras captured images that suggest layered rock extending for thousands of kilometers through Schiaparelli Basin and out into Valles Marineris. What appear to be sedimentary layers, however, could be signs of electric discharge activity.

Mars is thought to be covered with a subsurface ice layer because the average temperature of the soil is approximately minus 50 Celsius. Although thin clouds and low-lying fog are sometimes seen, nothing definitive can stand up to close scrutiny. The now defunct Phoenix lander is said to have found visual evidence for water, but the probes used to test for water in the soil returned a null reading. The soil was nonconductive, indicating no water molecules. The “moisture” was most likely carbon dioxide frost.

However, according to a recent press release, the Mars Science Laboratory rover known as “Curiosity” found what planetary scientists are calling layered rock strata in Gale Crater. This discovery led Mars analysts to conclude that they are sedimentary in nature.

Researchers studying Mars hold a long hoped for desire: the Red planet could be a cradle for different life forms that arose and evolved in a separate ecology. Nearly every consensus presentation about Mars insists that it must have gone through a stage when oceanic quantities of liquid water existed in the open. This idea also implies that Mars once retained an atmosphere dense enough in oxygen (and a moderating gas) so that life could also live in the open.

There is disagreement in the scientific community about whether such volumes of water could have existed on Mars. The March 5, 2007 edition of Scientific American reported that most of what has been interpreted as water-based erosion on Mars could have come from “dry avalanches” of dirt. The authors expressed serious doubts about whether observations demonstrate any effects caused by liquid water.

In previous Pictures of the Day about Mars, it was noted that powerful electric arcs once impacted the surface. The energy released by those discharges left sinuous rilles, flat-floored craters, and “railroad tie” patterns in canyons and craters. There are also intersecting gullies with no debris inside them, giant mesas with Lichtenberg “whiskers” and steep-sided ravines wending through landscapes dotted with circular uplifts.

The remnant topography on Mars is not rounded or softened by inundation, nor does it conform to slow weathering by rainfall or blowing dust. The formations are sharp, angular and fresh looking, as if they were sculpted quickly and with tremendous force.

The northern latitudes, in particular, are obliterated. Electric Universe advocate Wal Thornhill wrote that the northern region of Mars was the scene of a cosmic plasma storm that electrically sputtered millions of square kilometers out of the crust, subsequently redistributing the dust all over the rest of the planet as well as hurling it into space. Such an event means that water-based formations cannot exist, since the majority of the planet was catastrophically resurfaced.

Recent images from Curiosity suggest sedimentary layering and “crossbedding“ that planetary scientists believe are due to flooding and erosion. The surface of Mars is composed of iron and silicon, with massive quantities of oxygen bound into the soils and bedrock. It is like Earth in some respects, except that the atmosphere on Mars is so thin—sometimes described as standing on top of a mountain six-times higher than Everest—it lacks the ability to aggressively attack the Martian lithosphere.

The presence of iron oxide causes some investigators to think that there once was an oxygen-rich atmosphere on Mars that allowed its iron crust to “rust”, creating the enormous quantities of powdered hematite and magnetite. The striated and layered rock in the image at the top of the page is sharp-edged and broken into angular polygons. The fissures running through the area are filled with pebbles and fine dust. Close up images of the layered chunks reveal some of them to be razor-thin. The cracks have edges that are also sometimes razor-sharp. Several seem to be sliced off from large blocks composed of the same material. They cannot be the result of water erosion or deposition.

Since the formations on Mars are thought to be extremely old and cut by water millions of years ago, they are considered to be the result of activity that occurs on Earth in the present. Therefore, Earth-based geology is used to explain Martian areology. Electricity is never part of the equation. NASA scientists miss vital information that would assist them in their search for answers to the puzzles of planetary scarring and the origin of Martian surface features.