Home Picture of the Day Water on Mars 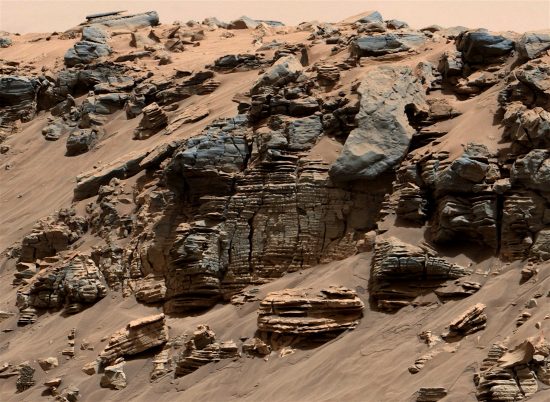 Did many lakes make an ocean?

It’s not going to do any good to land on Mars if we’re stupid.
— Ray Bradbury

Mars is not a rounded or softened world like Earth. It does not represent an environment that was weathered by rainfall or blowing dust. Rather, Martian topography is dry, sharp and fresh looking, as if it was formed quickly. The northern region of Mars appears to be electrically sputtered. Some force removed millions of square kilometers out of its crust, throwing dust all over the planet, as well as hurling it into space. That catastrophe eliminated any water-based formations, if they ever existed, since the majority of Mars was resurfaced.

It is presumed by planetary scientists that water on Mars evaporated eons ago, leaving sedimentary rock strata behind. According to a recent press release, the Mars Science Laboratory, otherwise known as “Curiosity”, discovered the remains of a lake more than three billion years old in Gale Crater.

Researchers hope that Mars was once a cradle for different life forms. Consensus opinions insist that oceanic quantities of liquid water existed in the open. That opinion holds within it the implication that Mars once retained an atmosphere dense enough in oxygen (and a moderating gas) for the presence of life.

Recent images from Curiosity suggest sedimentary layering and “crossbedding“ that planetary scientists believe are due to flooding and erosion. The surface of Mars is composed of iron and silicon, with massive quantities of oxygen bound into the soils and bedrock. It is like Earth in some respects, except that the atmosphere on Mars is so thin—sometimes described as standing on top of a mountain six-times higher than Everest—it lacks the ability to aggressively attack the Martian lithosphere.

Iron oxide deposits lead investigators to think that there was an oxygen-rich atmosphere on Mars that allowed its iron crust to “rust”. The layered rock in the image at the top of the page is sharp-edged and broken into angular polygons. The fissures running through the area are filled with pebbles and fine dust. Close up images of the layered chunks reveal some of them to be razor-thin. The cracks have edges that are also sometimes razor-sharp. They cannot be the result of water erosion or deposition.

Earth-based geology should not be used to explain Martian areology. Electricity as an eroding or sculpting agent is never an option in conventional theories.

Previous Pictures of the Day about Mars describe powerful electric arcs that once devastated its surface. The plasma discharges left sinuous rilles, flat-floored craters, “railroad track” patterns in canyons and craters, intersecting gullies with no debris inside them, giant mesas with Lichtenberg “whiskers” and steep-sided ravines wending through landscapes dotted with circular uplifts. If Mars was the scene of planetary lightning bolts and not water, should similar observations on Earth be reconsidered?