Home Picture of the Day Bursting at the Seams

Bursting at the Seams 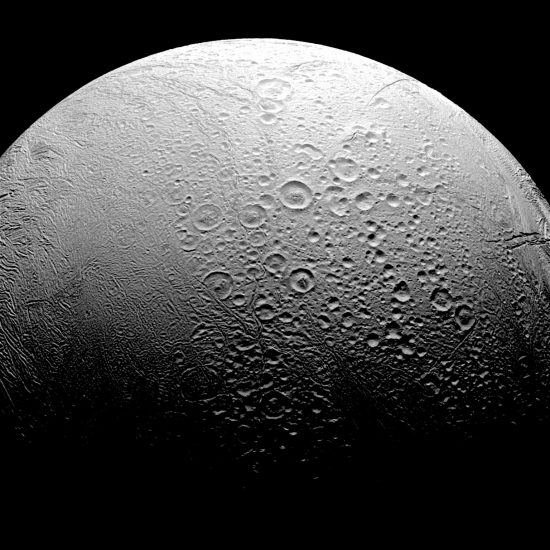 One of Cassini’s last images of Enceladus — 3/6/2017. North is to the right. Credit: NASA/JPL-Caltech/Space Science Institute.

A previous Picture of the Day reported that the Cassini Saturn orbiter flew through one of the plumes of vapor that erupt from the southern plains of 494-kilometer-wide Enceladus, a small moon, so cold no chemical reactions can occur. It was assumed by mission specialists that the plumes were erupting like geysers from beneath the surface.

In December 2013 NASA announced that giant “geysers” were erupting from the south pole of Europa, one of Jupiter’s largest moons. Those plumes are thought to come from cracks in Europa’s surface, similar to the “tiger stripes” on Saturn’s moon Enceladus. Could both moons be experiencing similar effects from their gas giant primaries?

The consensus view of astronomy sees friction and gravity affecting celestial bodies. Saturn’s gravity is thought to act like a tidal force: Enceladus is squeezed and pulled in Saturn’s gravitational grip. Its internal structure is said to stretch and compress, creating enough heat to form a liquid ocean more than 15 kilometers beneath the ice. The same “kneading” from Jupiter’s gravity is used to explain the eruptions from Europa.

In the case of Enceladus, observations of a star that recently passed behind a plume from the Baghdad Sulcus region revealed too little gas in the eruption to account for an increase in dust output. A counter-intuitive fact about the plumes is that dust output increases when Enceladus is farthest from Saturn in its orbit. Planetary scientists thought that water vapor in the plumes was being affected by tidal forces from Saturn. Instead, it was the jets that were changing.

Streams of charged particles from the Sun are captured by Saturn’s magnetosphere where they are held together by its magnetotail. Cassini observed particles in Saturn’s magnetotail changing: ionized water ions disappeared while H+ ions took their place, an observation consistent with charge flow (ionized particles) from Saturn’s upper atmosphere. Saturn exists in a dynamic electrical relationship with its orbiting family.

A recent press release announced that hydrogen gas is included in the material erupting from Enceladus. Of course, the Cassini team believes that it is due to chemical reactions “…between the moon’s rocky core and warm water from its subsurface ocean.”

The problems with jets on Enceladus are similar to those that space scientists have with cometary jets. They are using the same weak theory of narrow surface vents above a chamber of hot water. There is no evidence for such vents, either on comets or on Enceladus. Instead, plasma jets travel across the surface of Enceladus because they are created by electric discharges. Electric arcs cut grooves as they accelerate material into space. The “volcanoes” on Jupiter’s moon Io are a similar phenomenon that matches the Enceladus “plasma gun” effect.

“The crucial discovery is the ‘completely unexpected surprise’ of the similarity of the chemistry of the jets of comets and Enceladus. It should not have been a surprise. The jets of both are an electric discharge phenomenon, heating the surface. The matter in the jets is coming from the surface and not the interior… The only difference between Enceladus and a comet is their orbits. If Enceladus were to follow a cometary orbit it would suffer electrical interactions with the solar plasma and appear a giant comet.”