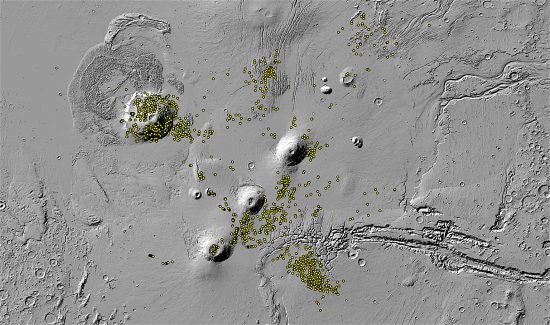 The map indicates what are thought to be volcanic vents in Tharsis Montes. Click image to enlarge. Credit: Jacob Bleacher

Do crustal blocks slide around?

According to planetary scientists, plate tectonic activity on Mars is similar to what happens on Earth. Studies undertaken by the University of California Los Angeles suggest that: “Mars is at a primitive stage of plate tectonics. It gives us a glimpse of how the early Earth may have looked and may help us understand how plate tectonics began on Earth.”

Other theories about how Mars changes over geologic time indicate that the volcanoes located in Tharsis Montes might not be extinct after all. The four gigantic craters are near one another—three of them run in a chain, so scientists think that they must have been created in the same way that standard theories explain crater chains.

According to a paper that appeared in Geophysical Research, Olympus Mons, Ascraeus Mons, Pavonis Mons and Arsia Mons could have a moving column of magma beneath them.

Conventional theories state that volcanoes on Earth form when the plates that make up Earth’s crust move over upwelling magma plumes. Since rising magma naturally seeks out the weakest fractures, allowing it to erupt onto the surface, lava deposits build up and create steep-sided mountains.

On Mars, however, there is no evidence that the crust moves. No plate boundaries exist, despite speculations about the formation of the Valles Marineris canyon system. Previous Picture of the Day articles stress that Valles Marineris is an electrical scar, and does not adhere to common interpretations of canyon formation on Earth.

In order to explain the Tharsis anomaly, the authors of the Geophysical Research paper postulate that the plume of magma is what moved rather than the crust: “We thought we could take what we learned about lava flow features on Hawaiian volcanoes and apply it to Martian volcanoes to reveal their history.”

Information provided by the Mars Reconnaissance Orbiter indicates that those ideas about lava flows should be permanently discounted. The principle of using Earth geology to explain Martian areology is what causes researchers to misconstrue what they see when they examine images of Valles Marineris.

In previous Picture of the Day articles about Martian volcanoes, it was pointed out that the shapes of the escarpments and the surrounding topography indicates that they could have been made by enormous plasma discharges that impacted the planet. The force of the electric current raised giant mounds and carved out their distinctive calderas.

As Electric Universe guru, Wal Thornhill points out: “Olympus Mons, 25 kilometres high, is NOT the highest volcano in the Solar System. It is a giant raised electrical blister with characteristic superimposed circular craters at the summit. It is the kind of blister seen on metal lightning arrestor caps after a strike.”

If electric currents of such magnitude influenced the planet Mars on a global scale, could they have done something similar on Earth? It is the theory of plate tectonics and its relationship to volcanism on our planet that should be reconsidered, rather than inventing a new theory because new observations do not support the old one.