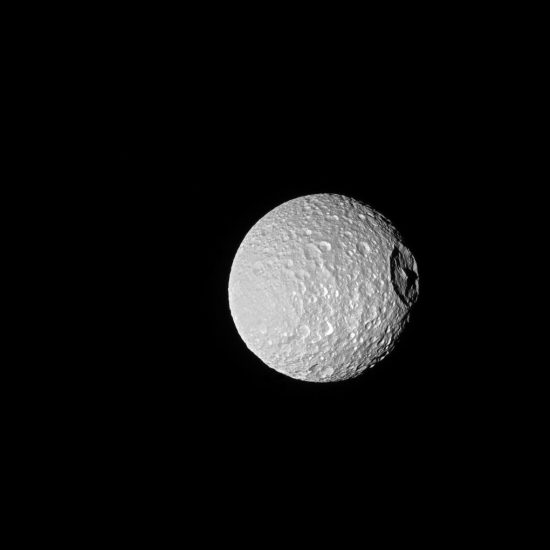 Latest image of Mimas from the Cassini spacecraft. Credit: NASA/JPL.

Mimas is a small moon, only 397 kilometers in diameter. It is similar in size to Enceladus and to one of Neptune’s moons, Proteus. As the image at the top of the page highlights, a giant crater dominates one hemisphere. Since it is about one-eighth the diameter of the moon, why whatever hit Mimas did not blow it apart is a mystery that continues to baffle planetary scientists. Herschel crater, named for Sir William Herschel who discovered Mimas in 1789, is 130 kilometers wide with a central peak as tall as Mount Everest. Such craters are theorized to form from asteroid impacts. However, there is little debris within the crater and not many boulders or other fragments around it.

It is thought that the lack of debris is because Mimas has little gravitational attraction, so the blast remnants did not fall nearby. It sounds plausible, except that craters on large planets like Mars—some many hundreds of kilometers wide—also demonstrate little fallback: their floors and sidewalls are swept clean.

The greatest puzzle of all is the hexagonal shape of Herschel crater. How can an asteroid explosion cause a hexagonal crater? After an impact event, no experiments demonstrate a polygonal crater. Impacts do not result in such formations. Instead, they are chaotic and leave behind circular depressions with conical bottoms.

Previous Pictures of the Day discussed Jupiter’s moon Io and Saturn’s moon Enceladus exchanging powerful flows of electric charge with their gas giant hosts. It is suggested that electricity plays a large role in planetary dynamics. As mentioned, Mimas is only 397 kilometers in diameter, one of the smaller moons in the Solar System. It is also extremely cold, ranging from -146 Celsius to -160 Celsius. The strange pattern of cold is confusing; NASA mission team members expected that Mimas would be warmer where the Sun’s energy shines straight down on it. However, infrared images show that the warmest temperature is along the western limb.

Other images suggest that temperature differences correspond to surface composition. It is thought that the ice grains on Mimas vary in size, causing them to change the way they reflect light. Mimas recently made the news because of an unusual orbital oscillation. Could the temperature and oscillation anomalies be related?

Electric Universe physicists think that plasma discharges on Saturn’s moons create clouds of energetic particles. For example, Mimas has a coating of some compounds that were eroded from the other moons in the Saturnian system, especially Phoebe. Perhaps the splotches of dark red and sooty black that color the faces of Rhea, Tethys, Iapetus, and Mimas are made of ultra fine dust electrically etched from Phoebe.

An interplanetary particle beam might have excavated Herschel crater and other features on Mimas. Due to plasma instabilities in the discharge, a hexagon was cut into its crust. When the electrical energy was withdrawn, Herschel crater remained, a “fossilized” geometric shape permanently burned in.

The electric currents that cut the craters and rilles on Mimas most likely left evidence of their passages in other ways. The anomalous temperature measurement that cannot be attributed to the Sun’s influence is probably one sign of those past catastrophes. It may be that the unusual V-shaped pattern in the false color images from Cassini is a warmer layer of dust and ice that was excavated from Herschel crater and ionically deposited downwind by a high-energy plasma discharge. Since Mimas is connected to Saturn by “electromagnetic flux ropes”, as it revolves, that connection could have created the features on Mimas and other scarred worlds when that electrical activity was more powerful in the past.