Home Picture of the Day Straighten Up 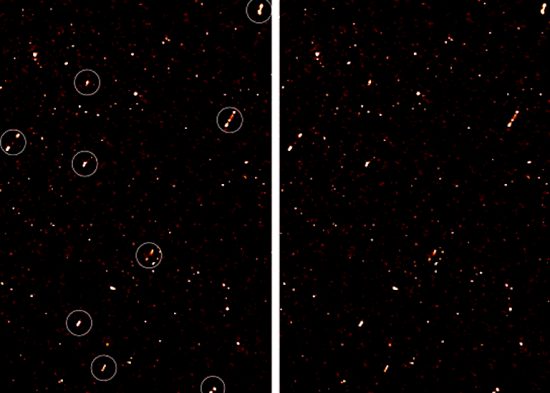 The Universe is filamentary.

Conventional cosmological theories state that a black hole forms when a star with a mass about five times that of the Sun reaches the stage in its evolution where its thermonuclear fuel is used-up. Since stars are thought to be internally powered fusion reactors, it is the outward push of radiation from inside a star that prevents its collapse under the force of its own gravity.

As the standard model of stellar evolution speculates, a star accumulates heavier atomic nuclei in its core, making it impossible to keep its outer surface away with radiative pressure. Gravity overcomes fusion, so the star’s gaseous envelope suddenly collapses, rebounding off the core in what astronomers call a “supernova explosion.” Since gravity is no longer hindered by the radiating core, the star is said to shrink under that force, disappearing from normal space, compressing into a mass with no geometry. A ghost of the star’s presence remains as an irresistible gravitational source.

That concept drives all ideas about galactic scale behavior, since it is assumed that 98% of all galaxies are inhabited by so-called “super massive black holes” (SMBH).

Among Electric Universe advocates, black holes are a questionable quantity. Despite claims to the contrary, no black hole has ever been observed. What is observed are effects that can be attributed to something other than ultra-dense matter and that is electricity.

According to a recent press release, “… supermassive black holes in a region of the distant universe are all spinning out radio jets in the same direction.” As Professor Romeel Dave from the University of the Western Cape wrote:

“This is not obviously expected based on our current understanding of cosmology. It’s a bizarre finding.”

In an Electric Universe, gravity gives way to the effects of plasma. The stars are not hot, dense balls of hydrogen. Rather, they are plasma, with fusion taking place on their surfaces and not in their cores. The Electric Universe definition of “plasma” is not the conventional one of “ionized gas.” Plasma is a state of matter: properties such as filamentation, long-range attraction and short-range repulsion, braiding, characteristic velocities, formation and decay of plasmoids, and other phenomena contribute to the plasma condition.

Everything in the Universe is ionized to some degree, therefore it is plasma. Positive ions and negative electrons move through plasma in ways not governed by gravity, although gravity might cause some heavy positive ions to create a charge surplus in one volume of space over another. When that happens, a weak electric field develops.

An electric field initiates electric currents that generate electromagnetic fields. Those fields interact with other fields generated by other currents. In images from space, as well as in high-speed photographs of plasma activity in the laboratory, those currents form twisted pairs of filaments called Birkeland currents. Birkeland currents follow magnetic fields and draw charged material from their surroundings. Electromagnetism “pinches” the dust and plasma into heated blobs of matter called plasmoids.

As the electric field intensifies it increases the pinch effect, forming spinning electrical discharges. At first they glow dimly red, then blaze yellow, and finally they might become brilliant ultraviolet arcs, called stars, driven by the electric currents that created them.

Cosmic filaments have structure; each is composed of smaller filaments that scale to an unknown extent. It has been demonstrated that plasma phenomena can scale to fourteen orders of magnitude. Nobel-laureate Hannes Alfvén hypothesized that the scale can go to 28 orders of magnitude or more!

Stars are nodes in electric circuits. Electromagnetic energy could be stored in the equatorial current sheets surrounding them until some trigger event causes them to switch into a polar discharge. The electric jet could receive its energy from a natural particle-accelerator, a “plasma double layer”, with a strong electric field. Toroidal magnetic fields form because of the polar plasma discharge, confining it into a narrow channel. Only electric fields can accelerate charged particles across interstellar space.

Since Birkeland currents are filamentary, and since stars and galaxies occur in strings, the alignment of galactic jets observed by radio astronomers is not due to a “… coherent spin in the structure of this volume of space…”, it is due to the collimated nature of those currents.