Home Picture of the Day Something New in the Wind

Something New in the Wind 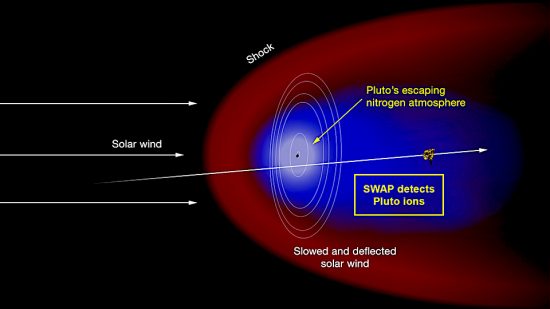 NASA launched the New Horizons spacecraft in January of 2006 on a mission to study the dwarf planet Pluto, as well as other Kuiper Belt Objects far from the Sun. The probe flew by Pluto in July of 2015, confirming many Electric Universe ideas about planet morphology, as well as providing new data about how it experiences the Sun’s particle outflow, known as the solar wind.

The solar wind is difficult to detect at Pluto’s distance because it is so diffuse: a mere 6000 particles per cubic meter, or a thousand times less dense than seen near Earth. For comparison, the lowest vacuum created on Earth is reported to be <10^-14 torr (about 1000 atoms per cubic centimeter). Earth’s atmospheric pressure would be about 10^11 times greater density.

According to a recent press release, it was thought that Pluto would act more like a comet than a planet when the solar wind ions reached its electromagnetic environment. Like Mars, Pluto has no intrinsic electromagnetic field to deflect charged solar particles, so they can impinge directly on the surface, as well as pick up atmospheric gas and pull it away into space. Due to those facts, it was assumed that the solar wind would only weakly interact with Pluto in the way that a comet does, creating “… a large region of gentle slowing of the solar wind, as opposed to the abrupt diversion of solar wind like a planet.”

“This is a type of interaction we’ve never seen before anywhere in our solar system…The results are astonishing. We were fascinated and surprised…We’ve now visited all nine of the classical planets and examined all their solar wind interactions, and we’ve never seen anything like this.”

Since Pluto’s electromagnetic environment is almost nonexistent, few atmospheric nitrogen atoms are ionized and carried away by the weakly interacting solar wind.

“An ion particle becomes influenced by the electric and magnetic forces present in the solar system, which can be a very efficient acceleration processes. But at Pluto, McComas, et al., found that only a wisp of atmosphere leaves the planet as ions.”

These comments from conservative astronomical investigators, with no knowledge of Electric Universe fundamentals, actually confirm those fundamentals. Since there is little electrical connection between Pluto and the Sun (because Pluto has no magnetosphere), and no shield between it and solar wind ions, then, like other rocky planet-sized bodies with similar characteristics, it sports a long tail composed of heavier, ionized atmospheric gases―primarily methane. Also, its magnetopause is “thin”, as the press release confirms, for the same reason. The so-called “Plutopause” is the boundary region between solar plasma and Pluto’s feeble electromagnetic field, so its equipotential surface is small.

As previously written, Pluto resembles its sister moons and dwarf planets. There are areas where ripples and “cantaloupe” terrain dominate. There are steep-walled craters with flat floors, hexagons, thousand-kilometer trenches, hectares of pits, craters on the rims of other craters, and other features that mark Pluto as an electrically devastated world. However, that devastation took place sometime in the past, leaving Pluto a blasted, frozen hulk. Analysis of data from New Horizons continues. Electric Universe advocates expect further confirmation.