Home Picture of the Day O Christmas Tree! Thy Candles Shine So Brightly! 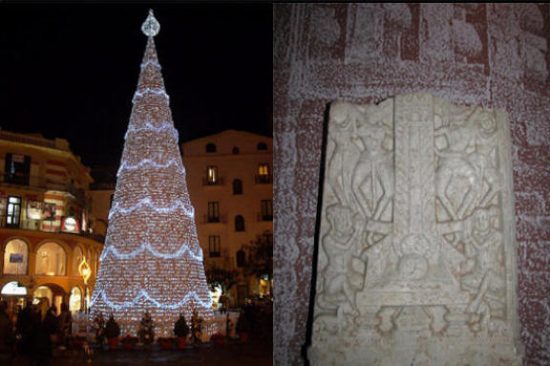 That the Christmas tree did not originally root in Christian symbolism has never been a secret.

The custom to erect a Christmas tree during the winter solstice, sustaining a reminder of the summer’s verdancy and abundance of sunlight through the heart of winter, is of ‘pagan’ origin, but its antiquity and former geographic distribution remain knotty subjects. Like the Maypole, the earliest historical references to the Christmas tree date from the fifteenth or the fourteenth century CE, but unlike it, the practice to set up and decorate a Christmas tree at that time appears to have been limited to a small part of Europe – first the Baltic region and then also northern Germany.

As is true of so many other branches of folklore, the late attestation of the ‘ritual’ does not necessarily imply a recent origin. For earlier epochs, the historian faces a dearth of texts discussing popular domestic topics and – especially in eastern Europe – a predominantly pre-Christian setting, within which references to non-controversial aspects of daily life may be expected to be sparse.

Against this background, there is every chance that the preparation of a Christmas tree was an old and ingrained part of traditional culture in northeastern Europe. If it was, the many conifers so adorned may have represented a single mythical prototype and the discovery of global analogues to the veneration of such a mythical ‘tree of light’ carries clout.

A brief survey of luminiferous trees in mythology reminiscent of the Christmas tree could hardly fail to acknowledge two passages in the Icelandic Edda, in which the numinous ash Yggdrasil was lauded as ‘the radiant, sacred tree’ and ‘a high tree, soaked with shining loam’. The central textbook of Qabbala, the medieval Jewish work entitled Zohar, owed its name to the luminosity of the ‘tree of life’, which doubled as the central axis in the scheme of the Sephirot:

‘In this tree exists one radiancy: zohar, radiance, all colors inhering there. Those colors ascend and descend, not settling anywhere except in that tree. When they issue from it to appear in the radiance that does not shine, they settle and do not, endure and do not – for they settle nowhere else’.

Indeed, for adepts of this brand of mysticism the tree ‘is the Sun which illumines all. Its radiance commences at the top and extends through the whole trunk in a straight line’. Further afield, the Omaha, of Nebraska, tell of ‘a luminous tree’ frequented by the Thunder birds: ‘When the Thunder birds alight upon the tree it bursts into flame and the fire mounts to the top. The tree stands burning …’ The Nlaka´pamux nation, of British Columbia, contend that the world received its first light from a magical tree that possessed an intrinsic luminosity and was then incinerated:

‘A very large dead tree grew on a hill called Yeqatwa’uxus cuxcu’x, near Spences Bridge. It was endowed with magic, and in some manner possessed light. At that time it is said the world was always dark. The Chipmunk did not like the continual darkness, and, going to the tree, set fire to its roots. He kept the fire going, and, as the tree burned, light commenced to come’.

While Balto-Finnish ancestors of the Christmas tree also used to be ritually burned, many other parallel traditions attribute the light to smaller units of fire, often compared to suns, gems or flowers, that were distributed across the tree like Christmas lights are today from Alaska to New Zealand.

Hindū literature knows of ‘a golden wish-tree, decorated with gems, shining like the sun’, which is variously called Kalpatura, Kalpavṛksa or Pārijāta. This entity may trace to an early Vedic belief in a fiery heaven-spanning tree from whose branches the gods as the ‘other fires’ were suspended like baubles on a Christmas tree – ‘to be a light unto the Ārya’.

In the early days, the flaming pillar had been personified as the fire god, Agni, who ‘like a builder raised his smoke to heaven … Eager he rises like the new-wrought pillar which, firmly set and fixed, anoints the victims’. Later, Buddhists would represent their hero, the Buddha, as ‘a fiery pillar, with wheelmarked feet, supported by a lotus, and with a triśula “head” …’ In Chinese lore, the giant tree known as fú sāng or ‘support mulberry’ was stated to be the place ‘where the ten suns were bathed:’

‘In the water is a large tree with nine suns in the lower branches and one in the upper’.

A commentator added to this: ‘In the top of the jo tree are ten suns, resembling flowers strung together, casting light downward’.

Meanwhile, the native people of Kédang, one of Indonesia’s Lesser Sunda Islands, preserved memories of ai werén, the ‘tree of gold’, so called because its ‘blossoms were golden chains (abalodon), its fruits were golden earrings (laong werén) …’ And members of the Iroquois confederation, of northeastern North America, held that the flowers of a tree supplied the only light during the first of the ‘three great mythic cosmic periods’ that have existed, before today’s luminaries had been placed in the sky; they would speak of ‘the sunless and moonless skyland, lighted only by the snowy white flowers of the great tree of light …’ Thus, the creation myth of the Seneca, in New York State, involved ‘a tree which was covered with white blossoms’ growing in ‘the middle of the village in the sky’, ‘in the center of the sky above’, where the first people used to live:

‘When this tree was in bloom its flowers gave light to the people there, but when its flowers fell, darkness came over the people. … the tree was sacred to them.’

An Onondaga variant of this myth reveals Ono’´djă’ or ‘Tooth’ as the name of the tree:

Candles and other lights aside, several other properties of the Christmas tree resonate with global ideas about hallowed trees. The ‘angel’ or star crowning the tree brings to mind the supreme deity at the pinnacle of the axis mundi, often conceived as a sun or a star. Garlands and ribbons draped around the tree resemble the respective vines, ropes and ‘serpents’ wrapped around the column in helical form.

The choice of an everlasting tree could hardly be separated from the world tree as an emblem of life, immortality and durability. Baubles compare to spirits and deities inhabiting the tree’s branches. The decoration of the tree with communion wafers, paper roses, apples, and so forth, as was common in medieval Germany, meshes with cross-cultural rituals involving the dispersion of ‘goodies’ from a cosmic tree.

With so many similarities with the sacred trees of non-European cultures it is easy to miss the forest for the trees. Yet the bottom line is that a unified image appears to have existed worldwide of a ‘tree’ reaching into the sky that supplied light to the world during a time of persistent darkness and displayed a number of discreet structural forms.

As the earliest precursor to the Christmas tree was mentioned in 1441 in Livonia and Livonia only converted to Christianity in the early 13th century, there is a strong case that the Christmas tree was a local, possibly Finnish reflex of this universal theme. Elaborate legends and rituals involving trees, many of which immortalised by the writings of the great Romanian mythologist, Mircea Eliade (1907-1986), flourished throughout the Arctic world and the Balto-Finnish Christmas tree may just represent a western outlier of this continuum.

As argued in many of our publications, the global memory of a blazing ‘tree’ in the dark sky preceding the time of ‘creation’ seems to have arisen in response to a low-latitude aurora of an extraordinary intensity which remained visible for a prolonged time during the late Neolithic period. Computer models and analogies with plasma z-pinches in laboratories suggest that this aurora for much of its existence took the form of a giant column sprouting dendritic lightning-like branches. Plasmoids and spiralling filaments formed in the column would produce a spectacle quite like that of a tree ornamented with baubles and ribbons. Hence, human eyewitnesses of this remarkable display, seemingly orchestrated by the gods, might well have been moved to sing:

‘From base to summit, gay and bright,

There’s only splendour for the sight!

How richly God has decked thee!’