Home Picture of the Day Sudbury 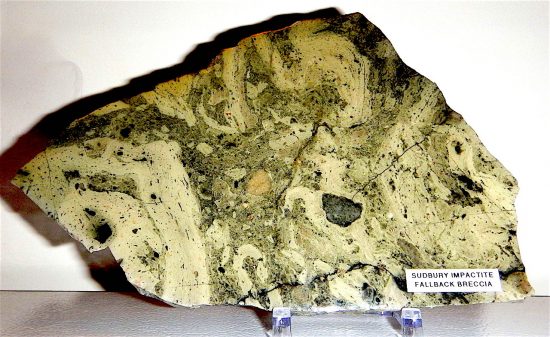 Was it a rock that collided with Earth?

North America is home to many craters that are said to be formed by asteroids. As a previous Picture of the Day pointed-out, one of those craters is thought by consensus geologists to be the remains of an impact that wiped-out the dinosaurs. That idea is no longer as hard and true as it once was, however.

First of all, it is not easy to prove because the rocks that the evidence comes from can not be accurately dated. Secondly, the fossil record is indeterminate as to whether there was a catastrophic event or a gradual decline in species. Some research points to different answers, since it appears that several marine species died out millions of years before the event.

Those problems are relevant to almost all large craters on Earth. Kinetic energy is not enough to explain the unusual features found in those formations. A case in point is the Sudbury Impact Basin. As planetary scientists propose, almost 2 billion years ago, a rock 15 kilometers in diameter created a hole in Ontario, Canada approximately 63 kilometers long, 31 kilometers wide, and 15 kilometers deep, making it the second largest crater on Earth—larger than Chicxulub. Ejecta from Sudbury was found more than 800 kilometers away near Lake Superior. Recently, more evidence for Sudbury deposits was discovered across northern Michigan and Minnesota.

Geologists speculate that tremendous shockwaves from the collision caused magnitude 11 earthquakes, dense, pulverized fallout all over the world, and tsunamis that circled the planet several times. In modern theories, such an event causes dimming of sunlight and a significant cooling trend because of atmospheric dust. What we call today a “nuclear winter”. The idea is difficult to correlate, since those effects are presumed from an assumed cause. What if there was no rock?

As previously written, Vredefort is probably the largest astrobleme on Earth, followed by Sudbury, Chicxulub, and Popigai. All are multi-ringed basins, thus they share common characteristics. Bedrock within Sudbury shattered into megaton blocks that were pushed away and piled up along the crater rim. Some of the largest fragments were thrown over 100 kilometers in all directions. Gneiss deposits were fused into a glass-like compound that covers the floor of the crater and appears to have splashed up and over the crater rim. The molten glass inundated several hundred square kilometers of the surrounding terrain with a thick layer capping chaotic breccias. Platinum family minerals are found throughout the region, including sperrylite, froodite, michenerite and sudburyite. Some records indicate that 1600 million tons of nickel, copper, platinum and lead have been extracted from Sudbury over the last 100 years.

In an Electric Universe, asteroid impacts give way to the effects of planetary electric arc discharges. Where those arcs came from is difficult to determine at this late date. Was it the encroachment of charged celestial bodies into the electric fields of Earth? Was it a cloud of electrified plasma from an unknown source that intersected the Solar System? Was it an extreme solar flare that charged Earth’s ionospheric circuit until it reached dielectric breakdown? Those are difficult questions whose answers can only be guessed at today. However, forensic details reveal the potential for an electrical cause that supersedes any rocky impact.

There are so many anomalous formations in Canada that it is impossible to enumerate them all. The Great Lakes, themselves, possess characteristics that could point to a electrical foundation: the gigantic bowl of hardened limestone in which they rest, for instance. Aligned in a gradual curve north of the Great Lakes are Lake Winnipeg, Lake of the Woods, Lake Athabasca, Great Slave Lake, Great Bear Lake, and many other smaller bodies of water. Near the largest of them are gold mines, lead mines, radium and uranium mines, along with platinum, silver and palladium mines.

Unusual concentrations of heavy metals could mean that transmutation of local elements might have occurred because of the intensity of the electrical discharges. That idea has been suggested in these pages as the cause for hematite blueberries on Mars. Electric arcs transmuted silicon into iron. That same phenomenon could have created some of the strange conglomerations of minerals seen on Earth.