Home Picture of the Day The Hubble Bubble 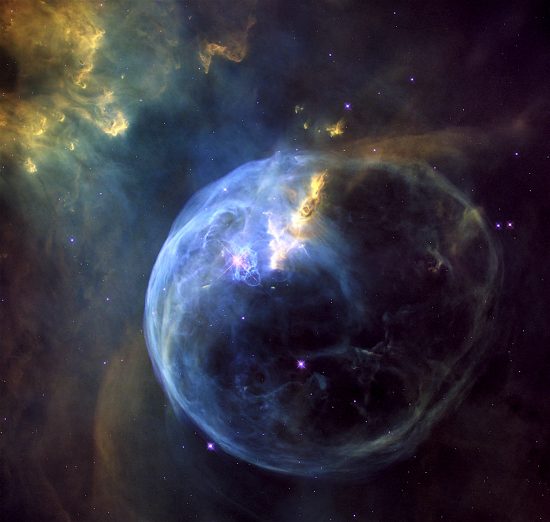 Planetary nebulae are electrical in nature.

Contemporary opinions about nebulae involve “winds” of gas and dust created by shockwaves from exploding stars “blowing” through them. They are often described as “star forming” because intense X-ray radiation and extreme ultraviolet light suggest that nuclear fusion reactions are occurring within the cloud.

Prior to modern telescope technology, astronomers photographed faint rings of light that they called “planetary nebulae”. The name was chosen in the early days because they appeared to be round, with a faint greenish tinge, similar to Uranus, so it was assumed that they might also be gas giant planets. Later, with the advent of stellar fusion theory leading to presumptions about exploding stars, they concluded that the rings were spherical bubbles of hot gas. Images of rings were due to edge-brightening at the edges of spheres.

According to theories of stellar evolution, stars in the latter stages of life experience violent upheavals as their supplies of hydrogen fuel diminish and the “ash” of heavier elements accumulates in their cores. Before they reach the final “white dwarf stage”, it is thought that chaotic interactions induced by the fusion of heavier nuclei cause the dying stars to eject vast quantities of matter—”sloughing off” their outer layers. Those expanding clouds of dust and gas, illuminated by senescent stars, are what astronomers detect.

With the advent of space-based telescopes, astronomers could see more details; details that contradicted the spherical model. Filaments, braids, overlapping rings, stacked rings around the central star, hourglass shapes, and coherent “tubes” of filaments were and are visible. It was obvious that nebulae are cylinders and not spheres. Sometimes, a small disk could be seen around the star: a torus around the cylinder.

In an Electric Universe it is not hot gas that flows through space, it is plasma. The physics of electricity apply, not the physics of wind. Inside the shell of a planetary nebula are one or more plasma sheaths, or “double layers”, that act like capacitors, alternately storing and releasing electrical energy. The current ebbs and flows inside and outside the sheaths within the shell.

Electric discharges in plasma create double layers. Positive charge builds up on one side and negative charge on the other. An electric field exists between them and if enough electricity is applied a double layer glows, otherwise it is invisible in its “dark mode”.

The Hubble Space Telescope site’s new image of the Bubble Nebula reveals many of plasma’s fundamental glow mode characteristics. Keep in mind that the camera is looking down the central star’s axis into the z-pinch funnel, therefore the cylinder of electric current appears to be a circle.

In the upper right of the image, there is a double ring (perhaps triple), indicating regions of increased density through which the current is moving. Each ring is composed of bright knots connected by dim radial filaments, revealing individual Birkeland currents that compose the sheet current of the tube (similar to a desk top “plasma ball”). They can be seen inside the ring, running down the center, as well as outside it, in straight lines. The bright swirls and blobs on the left side of the ring could be a diocotron instability in the current sheet. Those instabilities are commonly seen as the swirls that develop in the polar aurorae on Earth.

Since nebulae are stellar scale z-pinches in a flow of electricity, there is enough power to supply the radiation “load” of the central star. Stars, as written many times elsewhere, are powered by electricity “coupled” with nebular discharge currents, rather than by nuclear fusion. Since nebular current cannot exist beyond its optical glow it must be part of a completed circuit that winds through the Milky Way.