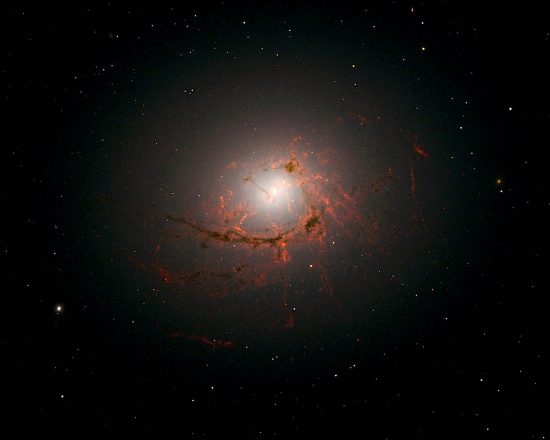 Galactic filaments are known to plasma physicists as Birkeland currents.

A recent press release details the enigmatic structure of Galaxy NGC 4696. What makes this galaxy so unique is that multiple strands of material extend outward in light-years-long tendrils, enclosing it in a loose cocoon.

According to astrophysicists, the filaments are examples of “ionized hydrogen”, or electric charge carriers. The hydrogen atom is composed of one electron and one proton, so ionization reduces it to individual nucleons. Since electricity is generated by charged particles in motion, the filaments are transmitting electromagnetic energy across vast distances. What holds these “transmission lines” together?

Since the hydrogen in NGC 4696 is ionized, it is defined as a plasma. In an Electric Universe, charge flow in plasma generates electromagnetic fields that constrict the current channel. Previous Picture of the Day articles point out that the constriction is known as a “Bennett pinch,” or “z-pinch.” Pinched electric filaments remain coherent over long distances because they wind around each other without coalescing, something like a twisted pair of electric wires.

It is well-known that Birkeland currents are probably the greatest long-range attractors in the Universe, with a force more about 39 orders of magnitude greater than gravity. Birkeland currents attract each other when they are far apart but repel each other when they are close, resulting in pairs of filaments spiraling around their common axes. This process can repeat, producing “cables” of pairs of pairs and so on.

Electric fields in such galaxy-sized currents accelerate charge carriers to near light speed. An electric field’s strength near an electrically charged object is defined as inversely proportional to the distance between the point and the object. However, according to retired Professor of Electrical Engineering, Dr. Donald Scott, the electric field between Birkeland currents in space falls off with the square root of the distance, increasing the attractive force.

These ideas contrast markedly with those from consensus astronomers. As the Hubble announcement states, filamentation in NGC 4696 is because “…a supermassive black hole is blowing out jets of matter at nearly the speed of light”.

A Chandra X-ray Observatory image, combined with radio information provided by the Very Large Array, reveals giant “bubbles” supposedly swept out by radiation from a central black hole. However, instead of “bubbles”, the infundibular formations are an unmistakable indication that Birkeland currents are “squeezing” plasma and charged dust into z-pinch zones.

Radio lobes, filaments, synchrotron radiation—all those phenomena are manifestations of electricity in space.