Home Picture of the Day Order Out of Chaos

Order Out of Chaos 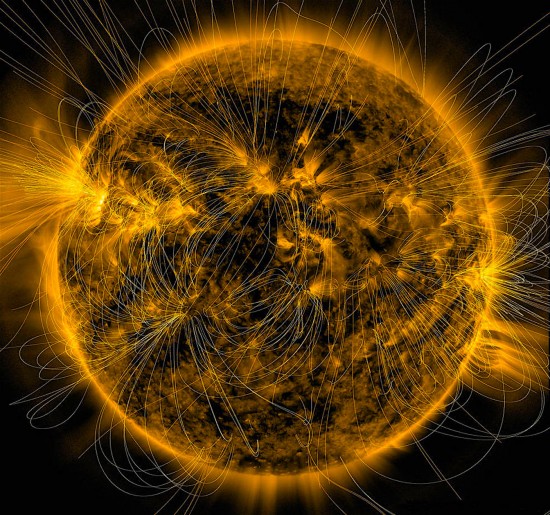 A model of the magnetic field in the Sun’s atmosphere superimposed on a false-color, extreme ultraviolet (171 angstroms) image. Credits: NASA/SDO/AIA/LMSAL

What makes the Sun a variable star?

Heliophysicists remain baffled by many aspects of the Sun’s behavior, because they do not completely apprehend its electrical component. The mainstream journal’s content reveals this lack in several ways, but essentially, “…the sun is a swirling cauldron of fluid…”, dominates solar theory. Therefore, a continuing puzzle is how a coherent magnetic field arises in the Sun when nothing but chaos governs smaller scales.

In the thermonuclear fusion model of the Sun, hydrogen in its core is crushed with so much force that it is converted to helium, releasing tremendous amounts of energy. The temperature in the core is thought to be 15 million Celsius, with compressive strain greater than 340 billion times Earth’s atmospheric pressure. A common metaphor used to describe the Sun is to imagine millions of hydrogen bombs exploding all at once within a confined space: 700 million tons of hydrogen are said to be converted into helium every second through fusion reactions.

The Sun’s surface is known as the photosphere. Above that surface layer is the chromosphere, and above that is the corona, the outermost part of the Sun’s visible atmosphere. The photosphere averages 6000 Celsius, while the corona can be as much as two million Celsius! This is another great mystery among heliophysicists: how can the hottest region of the Sun begin at an altitude of 4000 kilometers and extend over a million kilometers from its surface without any significant temperature drop?

In the electric model of stars, there are none of the mysteries that plague astrophysicists, in general. The Sun is a positively charged electrode in a circuit, while the negatively charged electrode is located far beyond the planetary orbits. The “virtual cathode” is known as the heliopause. The electric model relates sunspots, flares, coronal heating, and all other solar activity to fluctuations in electricity from a galactic source. Birkeland current filaments slowly move through the Solar System, supplying more or less power to the electric circuit powering the Sun.

If the Sun is connected to the rest of the galaxy by Birkeland currents, then its puzzling, “chaotic” characteristics are due to fluctuations in current arriving from the Milky Way’s electric generator. The Sun is a gigantic electric arc, not a ball of superheated hydrogen gas. Therefore, the energy of the Sun is focused from outside and not expelled from inside. The overall electric field of the Sun is the ordering principle.