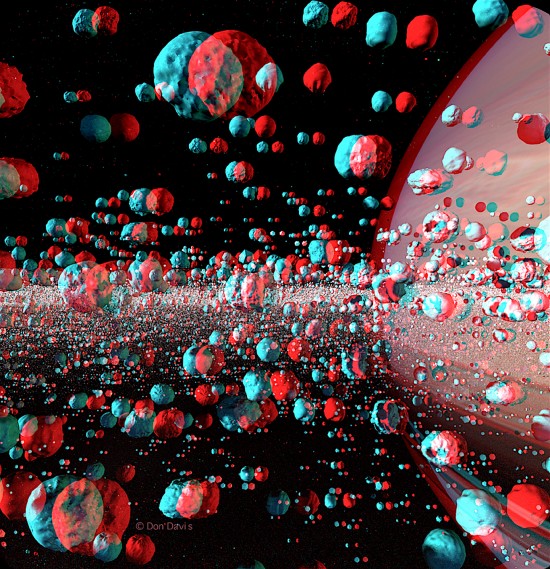 Saturn’s rings in 3D. Click image to enlarge. Note: for best 3D effect, use red left and cyan right glasses. Start slowly at middle left and scan across the plane until Saturn appears in the background. Credit: Donald Davis

Saturn’s main rings, including gaps, are approximately 416,000 kilometers wide, but are estimated to be a mere 50 meters thick, possibly as little as 10 meters. This means that even the most powerful Earth-based telescopes can detect only a thin wire extending across the planetary disk when they are edge-on.

Every fourteen or fifteen years, Saturn’s rings become invisible to telescopes on Earth. That equinox passed in August of 2009, so the rings are now shifted to the north. The reason for the ring tilt is that Saturn, itself, is tilted on its axis by 27.4 degrees. Since the rings are tilted at the same angle, as Saturn revolves around the Sun in its 30 year orbit, it gradually brings them into visual alignment with its equator.

Astronomers think that the rings were formed in one of three ways: they are the icy leftovers from the original nebular cloud out of which the planet condensed; a small moon gradually came too close, whereupon it was torn apart by Saturn’s tidal forces; or the rings formed after a moon was destroyed by an asteroid, leaving the fragments in orbit. Regardless of the way they were formed, they are theorized to be over four billion years old—almost as old as the Solar System.

What keeps the rings together and in place is still a mystery to astrophysicists. If they formed billions of years ago, they should have been drawn into Saturn’s gravitational maelstrom and destroyed. It is thought that micro-meteorite impacts “erode” material off some small moons and eject it into orbit, where it is slowly sorted by Saturn’s gravity field into thousands of individual bands. The rings are sustained because some moons are getting smaller all the time. This is known as “billiard ball” physics.

Electric Universe theory sees things differently. In a previous Picture of the Day about Saturn’s plasmasphere, it was noted that planets and moons do not exist in an electrically neutral environment. Saturn, in particular, has a family of moons that exhibit electric discharge machining on a vast scale, as well as features within its atmosphere that could be characterized as lightning discharges.

The aurorae on Saturn emit intense radio waves and the planet is surrounded by a torus of plasma that emits X-rays and extreme ultraviolet light. Saturn displays many aspects that are predicted by the Electric Universe theory, including the shape of its rings. In 1913 Kristian Birkeland wrote: “It seems almost incredible that such a ring of cosmic dust should be able to exist for ever, so to speak, without other governing forces than gravitation…”

Planets with magnetic fields can trap hot particles to form giant electrified clouds. NASA scientists note that Saturn’s magnetic field bends around Enceladus “due to electric currents generated by the interaction of atmospheric particles and the magnetosphere of Saturn.” Further flattening of the plasma torus on the sunward side demonstrates an electrical (not mechanical) effect is occurring between Saturn and the Sun.

Gravity-only models of the Solar System insist that Saturn’s rings were created, held and shaped by the activity of “shepherd moons” and angular momentum. Instead, electrical forces that are orders of magnitude more powerful than gravity seem more likely.