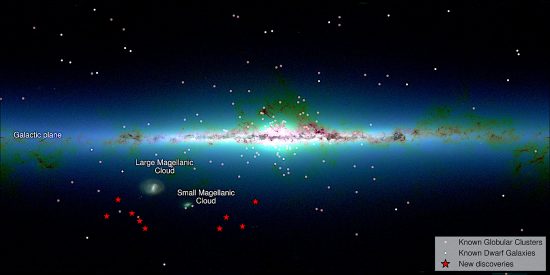 Dwarf galaxy evolution is a problem for consensus theories.

The Milky Way has at least two smaller companions, the Large and Small Magellanic Clouds. Some astronomers suspect that there are as many as 80 or more. A new predictive model is supposed to help answer the question.

In an Electric Universe, clusters of galaxies, galaxies themselves and their associated stars are driven by electric charge moving through dusty plasma. Birkeland currents create z-pinch zones between spinning magnetic fields in an electrical vortex. Matter in the plasma state forms electromagnetically confined spheres, some in arc mode, some in glow mode and some with variability between the two states. Cosmic Birkeland currents flow into galaxies, so their stars are powered by that flow of electric charge. Since galaxies receive their power externally, those energetic structures are seen by radio astronomers as filaments that are traceable by their electromagnetic fields.

Birkeland currents are drawn toward each other in a 1/√r relationship, with a long-range electric force attraction that can be 39 orders of magnitude greater than gravity, although their magnetic attraction is weaker.

According to a recent press release, the smallest, and faintest galaxy orbiting the Milky Way, Virgo 1, has been detected by the Subaru telescope in Hawaii. In the announcement, it is suggested that smaller galaxies accompany the Milky Way (and, presumably, other galaxies) because large galaxies form when small galaxies collide. That means that scores of satellite galaxies remain as “leftovers of the ones that formed our galaxy”.

On the other hand, Winston Bostick, a plasma science pioneer who worked with laboratory-scale plasmoid experiments, argued that galaxies mature from initial quasi-stellar (QUASAR) plasma conditions. Bostick thought that a continuous process of electric charge flow powers the Universe, so his analysis of galactic behavior was based on electricity. Dark mode cosmic Birkeland current filaments induce rotation where they intersect, so are responsible for the formation and rotation of galactic disks.

Along with dwarf galaxy companions, spherical concentrations of stars surround many galaxies. Globular clusters could be thought of as small-scale galactic nuclei, an idea that fits well with Halton Arp’s observation that galactic nuclei eject core material that subsequently evolves into companion galaxies. Those clusters could be thought of as “seeds” flung out of galactic cores: “mini galaxies” born in the more dense star-forming regions of parent galaxies.