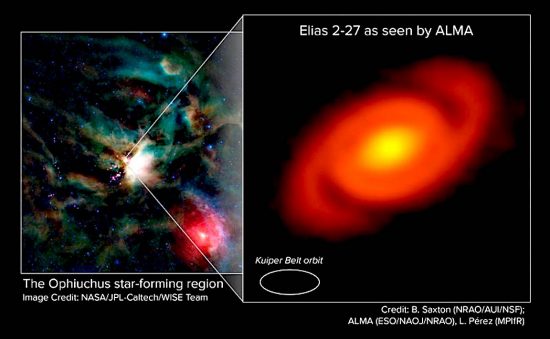 The term “planetary nebula” was first applied in the early days of telescopic observation, since they appeared to be round, with a faint greenish tinge, similar to the planet Uranus, so it was assumed that they might also be gas giant planets. Planetary nebulae come in all shapes and sizes, particularly elliptical shapes and helical spirals. Consensus viewpoint see shock waves, or stellar winds “crashing into” slower material ahead of them.

According to a recent press release, Elias 2-27 exhibits a pinwheel of dust surrounding a putative new star. So-called “density waves” are said to be responsible for the spiral surrounding the star.

“There are still questions of how these features form. Perhaps they are the result of a newly forged planet interacting with the protoplanetary disk or simply gravitational instabilities driven by the shear (sic) mass of the disk.”

In a previous Picture of the Day, it was noted that Dr. Charles Bruce thought that planetary nebulae are electric discharges. Rather than spheres, he reasoned that their shapes were hourglasses, with a central star obscured by a dusty torus, since nebular shapes are similar to the twisted filaments and spirals of electric discharges in plasma.

Those electrical events form double layers along their current axes. Positive charges build up on one side of the cloud and negative charges on the other. A powerful electric field develops between them. If enough current is applied to the double layer it glows otherwise, it remains in “dark mode” and will be invisible. Electric currents flow along the double layers. In plasma, the currents spiral into filaments, which attract each other.

However, instead of merging they wind around, pinching down into arc mode discharges. If enough current passes through the plasma cloud, a z-pinch in the double layer will initiate the formation of a star. Electric double layers can be “pumped” with energy from galactic Birkeland currents in which they are immersed. The excess input power pushes them into “glow mode,” while increased flux density draws matter from the surrounding space into filaments, igniting the nebular “gases” electrically.

Could it be a double layer phenomenon in Elias 2-27 that is creating the spiral structure? That question might never be answered experimentally, because the only way to detect double layers in space is to send spacecraft equipped with Langmuir probes through them. However, more local experiments within the Solar System have found double layers like those created in the laboratory. Such structures are known as magnetospheres, magnetotails, cometary nuclei, and comet tails.