Home Picture of the Day Similarities 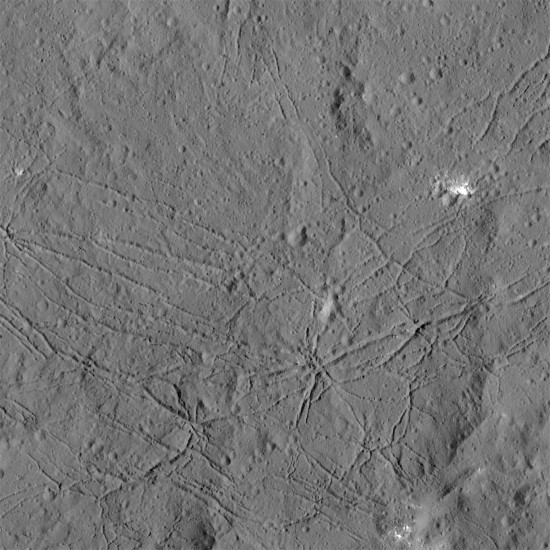 Dantu Crater on Ceres from 385 kilometers away. Resolution is 35 meters per pixel. Credit: NASA/JPL-Caltech/UCLA/MPS/DLR/IDA

The topography of Ceres is reminiscent of other planets and moons.

NASA launched the Dawn spacecraft on September 27, 2007. Its scientific observations of the asteroid Vesta began on July 17, 2011 and ended on September 5, 2012 when Dawn fired-up its ion thruster engine and headed toward Ceres. Dawn entered the gravity field of Ceres at a distance of 61,000 kilometers at 7:39 AM EST on Friday, March 6, 2015.

Ceres is a devastated world: Craters so large they are out of proportion to the dwarf planet’s size; rilles and trenches gouged into its surface; oddly shaped mountains and hills, as well as bright material just below what looks like a scorched and blasted surface. Other objects in the Solar System exhibit similar characteristics. Vesta, another dwarf planet in the asteroid belt, appears to be a smaller twin of Ceres, with comparable formations.

However, larger celestial bodies, planetary in scope, also resemble Ceres. Mercury, for example. One of the common features on Mercury are the large craters with fractures and furrows running through them.

Electrical scarring on Mercury is evident in many locations. Indeed, the whole planet appears to exhibit nothing but electrical effects. The etched furrows radiating outward from some craters denote the path of untold numbers of electric filaments. On Earth, those filaments would have been the largest lightning strikes ever witnessed.

In the image at the top of the page, Dantu crater resembles something similar in power and scope. The so-called “fractures” in the crater floor are actually chains of craters. In an experiment at Vemasat Laboratories, Dr. Cj Ransom created the same kind of etched furrow by shocking a thin layer of magnesium silicate with a 120 milliamp, 12,000 volt discharge for five seconds. He created radial gouges on a small scale equivalent to Mercury at the large scale. As pointed out in previous Pictures of the Day, Nobel Laureate Hannes Alfvén thought that electrical (plasma) phenomena could be scaleable by as much as 14 orders of magnitude.

Since an electric arc is composed of filaments, it manifests in many ways. One of those ways is to act like a plasma “drill bit,” cutting steep crater sidewalls, while sometimes leaving a “pinched up” mound in the center. Multiple filaments cut one crater within another, often with one or more craters on the rims.

Urvara crater reveals large, steep-walled, v-shaped event scars entering the crater in two places. No impact on the surface or volcanic eruption can create such features. Gaue crater is shallow, with a melted floor and slumped sidewalls—not what is expected from meteor impacts.

Geshtin crater is 77 kilometers across, with 60 kilometer Datan crater on its rim, creating another crater wall inside Geshtin. Datan, according to NASA scientists, was then hit on its rim. Many Picture of the Day articles point out that electricity is unrecognized by consensus science as a formative influence. Most large craters on Ceres (and Mercury) are electrical in nature. They can be recognized by their steep sides, sharp rims, flat floors, a lack of blast debris inside the craters or strewn around them, fulgurites embedded in the sidewalls, and, sometimes, as mentioned, other craters on their rims.

When electricity passes over a solid body the current pulls charged material from the contact surface. Neutral dust and stones will be pulled along with the ionized particles. Craters formed by electric arcs are also circular because electromagnetic forces cause them to maintain right angles to the impact zone. Since two or more filaments rotate around the arc axis, it can excavate the aforementioned steep side walls.

If the surface is negatively charged, an arc will travel, sometimes eroding elongated craters. The arc might jump from high point to high point. Smaller craters on the rims of larger ones reveal this phenomenon. A series of craters in a line, otherwise called a “crater chain,” is another sign of arcing to a negatively charged substrate.

Electric arcs traveling across a conductive medium vary in strength from millisecond to millisecond, so they burn chains of craters instead of smooth channels. In fact, the “smooth” channels seen on many objects are crater chains packed so closely together that they can no longer be distinguished.

Dawn will remain in orbit around Ceres for a long time. June 2016 marks the official end of its mission, but it will continue circling the dwarf planet for a minimum of 50 years, protecting the environment of Ceres in case the putative water discovery is true. It will not land as the NEAR-Shoemaker satellite landed on Eros, and it will not be incinerated in an atmosphere like Galileo—especially as there is no atmosphere at Ceres.

The dwarf planets Vesta and Ceres add weight to the electrical theory of the Solar System that has long been proposed by Electric Universe advocates. Formations on moons and planets conform to that theory far better than conventional ideas.