Home Picture of the Day A Fox in the Henhouse

A Fox in the Henhouse 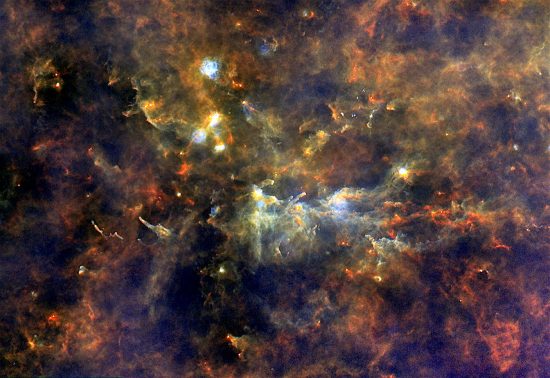 Birkeland currents transport electric charges through space along twisting electromagnetic filaments that can span intergalactic distances. They are seen at all cosmic scales because almost every celestial object in the Universe is filamentary. Planetary nebulae are webs of lighted tendrils; energetic galaxies emit braided jets, while some galaxies display threads of material extending for many light-years.

The cosmos is spun from those interacting filaments, each composed of helical Birkeland currents. Power in the circuits is converted from electricity into rotational energy, otherwise known as angular momentum, so galaxies spin because they are electric motors driven by power lines. They should be evaluated according to electrodynamic principles.

A recent press release announced that the Herschel mission, in the process of analyzing data from the now defunct space observatory, created a “…series of unprecedented maps of star-forming hubs in the plane of our Milky Way galaxy.”

The Herschel Space Observatory’s three-and-half meter mirror was the largest ever launched. Herschel entered orbit around LaGrange point L2 (behind Earth in relation to the Sun) in July 2009, so that its supercooled infrared detectors could be protected from solar radiation. Herschel’s helium coolant system was built to last only three years, but with careful management, the system performed infrared observations (70, 160, 250, 350 and 500 μm) of the Milky Way until April 29, 2013.

In the image at the top of the page, infrared emissions from dust and gas in the Vulpecula OB1 Nebula at temperatures between -220 Celsius and -260 Celsius reveal a “… a spider’s web of filaments that stretches across the star-forming regions of our Galaxy.”

As the announcement from the European Space Agency (ESA) states, the extreme ultraviolet light and radiation are “compressing” the the nebular material, causing it to “collapse” and form new stars.

In an Electric Universe, it is large-scale plasma discharges that produce electrodynamic filaments. Gravity (“collapse”) and kinetic energy (“compression”) can contribute to star-forming phenomena because of charge separation, buts stars in galaxies appear to form along strings, lining-up for great distances. This happens when plasma moves through clouds of dusty gas: some neutral atoms in the cloud are ionized. As is well-known to electrical engineers, whenever there are moving charges, electric fields occur, creating magnetic fields that align and constrict the electric charge flow. Since Birkeland currents are electromagnetic, they isolate regions of opposite charge and prevent them from neutralizing.

A gravity-only theory cannot resolve the issue of star formation. The new structures seen within the Milky Way continue to elude explanation by consensus astronomers. New discoveries uncover new questions for them, but continue to reinforce Electric Universe viewpoints.