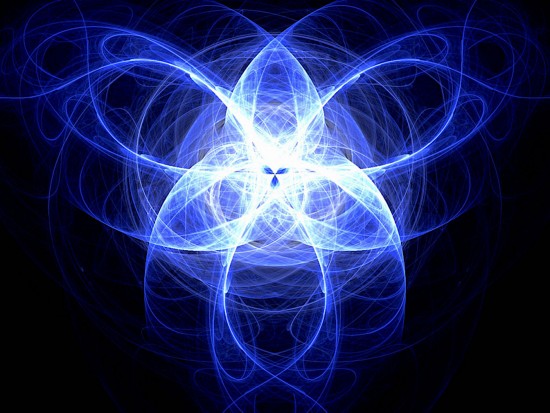 “Fractal blue” by Dragontech22 at DeviantArt

“Before the dawn of history,” wrote Paul Desautels, former supervisor of the mineralogy department at the Smithsonian Institution, “men were finding and assigning special values to certain kinds of rock and mineral pebbles that were rare or particularly beautiful.”1

“Thus was born the gemstone,” he went on, “a mineral set apart from the rest by beauty, rareness, and durability. The combination of attributes is relatively uncommon. Perhaps only one hundred mineral species are considered gems. For the sake of these baubles, wars have been fought, kingdoms have changed hands, and assassinations have been committed.”2

As he then adds:

“Gemstone lore, legend, and superstition have been part of every human society. In almost every culture gem materials have been given religious or spiritual significance.”3

The above has special meaning for us because, just as the color black in heraldry continued to be named for Saturn down into medieval times, so also did blue gems persist in being held sacred to the same planet and its god. One of these gems, perhaps the bluest of them all, is the sapphire. Fair enough, sapphires come in different shades, but those which are not blue are called by their respective color. When the word lacks such a designation, it invariably refers to the blue variety, especially the deep blue, which is the most valued among its widespread family.

The word “sapphire” is itself derived from the Greek sappheiros through the Latin sapphirus, both of which mean “blue.” That much is common knowledge. What might not be widely known is that the word’s etymological roots are also evident in the Hebrew word sappir as well as in Persian safir.4 Now while both of these words stand for “sapphire,” the Persian safir actually translates as “beloved of Saturn.”5 Nor is this unique. In Sanskrit, the word “sapphire” is rendered shanipriya, derived from Shani, which, as we have seen, is one of the names for Saturn in that language, and priya, which means “precious.” Thus shanipriya, Sanskrit for “sapphire,” means “precious to Saturn.”6 In fact, if we are to believe professional jewelers, the word “sapphire” can be “roughly translated to mean ‘dear to the planet Saturn’ in many different languages.”7

Sapphires were not the only gems held sacred to Saturn. In China, so was jade, but not the usual green variety. On the contrary, the jade used in the imperial worship of Shang-te, the Saturnian Yellow Emperor, was of the rarer blue. As we earlier noted, this rite was held at Peking’s Altar of Heaven, during which the Emperor was required to kneel while facing north, Saturn’s old celestial throne. It was during this ceremony that the emperor had to acknowledge to be inferior to Heaven, even if to Heaven alone. And it was in that respect that one of the most precious of royal items, a cylinder of blue jade, was offered to the Supreme Ruler of Heaven, that is Shang-te himself.8

Extracted from Chapter 12 of Metamorphic Star, one of the reconstruction books by Dwardu Cardona.