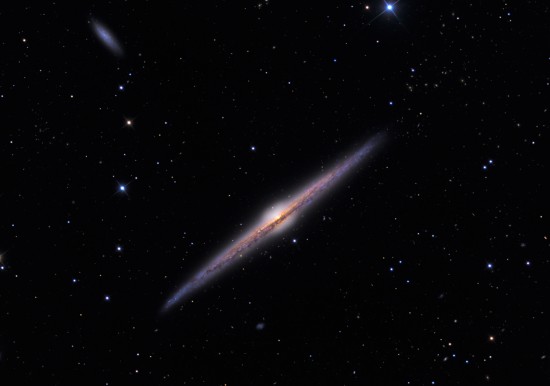 Gal·ax·y /’ɡaləksē/ noun; plural noun: galaxies. A system of millions or billions of stars, together with gas and dust, held together by gravitational attraction.

Modern astronomers suggest that galaxies are clouds of hydrogen gas and intergalactic dust that were assembled by gravity billions of years ago. They also think that most galaxies contain supermassive black holes (SMBH) with inertial mass greater than 10 million stars. It is those “gravitational point sources” that are supposed to cause galaxies to spin, to emit jets of gamma and X-rays that are thousands of light-years long, and to generate radio lobes sometimes larger than the parent galaxy.

Electric Universe theory, following Hannes Alfvén, proposes that galaxies are similar to a scaled-up version of Michael Faraday’s invention, the homopolar motor/generator, a device that is driven by magnetic fields induced in a circular, conducting plate mounted between the poles of an electromagnet. Magnetic induction causes the plate to spin at a rate proportional to the input power. The same electromagnetic induction powers galaxies through externally applied fields.

Moving charges constitute an electric current that can generate magnetic fields. That concept has been known since the days of Michael Faraday. However, without an internal context, observations tend to align themselves with what is already believed to be “true”. In the context of an Electric Universe, charged particles in motion are what is referred to as “electricity”. When more charged particles accelerate in the same direction, the electric field gets stronger. That is a familiar idea to electrical engineers, but when astronomers find moving charges in space they are mystified and refer to them as “winds,” or “shock waves”.

Galaxies are not gravitational objects (although gravity plays a part), they are based on plasma phenomena. Whenever there are subtle changes in cosmic clouds of gas and ionized dust, such as from gravity or the influence of an electromagnetic field, regions of charge separation can form. Whenever charges separate, electric fields follow, initiating electric currents. Those currents form magnetic fields confining the charge flow, squeezing them down into filaments, or Birkeland currents. Those confined charges increase the magnetic field strength, which squeezes the filaments even tighter. After a short time, those Birkeland currents can form z-pinches, creating plasmoids that ignite like electric arcs. Since plasma events are scaleable by many orders of magnitude, filamentation and z-pinch phenomena are fractal in nature.

Filaments can expand and explode, throwing off plasma that accelerates to near light-speed. Jets from opposite poles of a galaxy end in energetic clouds emitting X-ray frequencies. Those effects are explained by plasma science and not kinetics or particle physics. The largest of the filaments, perhaps billions of light-years long and millions wide, form galactic superclusters, then clusters, then galaxies, then stars, then stars eject rocky bodies, leading to what we call the Universe.