Home Picture of the Day Current Models of the Sun — A Charged Subject: Conclusion

Current Models of the Sun — A Charged Subject: Conclusion 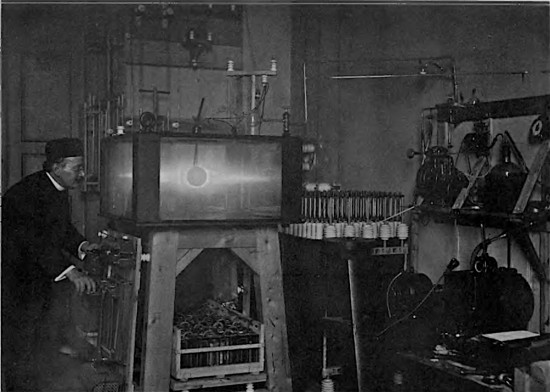 Kristian Birkeland experimenting with a terrella (1908-1913).

In a paper published in 1904, the Swedish physicist and chemist Svante August Arrhenius (1859-1927) maintained that radiation pressure accounts for comets’ tails and the build-up of negative charges on “the atmospheres of celestial bodies, e. g., the earth”, until “the charge is so great that discharges occur, and cathode rays are formed, which carry the charge back to the universe.” Arrhenius carefully considered the balance between electrons moving into and out of the sun. Reasoning that the sun must acquire as many electrons as it sheds in order to maintain “Electric Equilibrium”, he concluded that radiation pressure on other stars causes them to expel electrified dust particles, which must then pass through the sun’s outer regions, where they build sufficient electrical tension for a permanent, luminous discharge to occur:

“If the sun only emitted negatively electrified particles on all sides, it would soon assume so great an electric charge of positive sign, that the electric forces would hold the negative particles back in the neighbourhood of the sun. There must, therefore, be some cause that carries back as much negative electricity to the sun as it loses through the emission of negative particles. … these charged bodies part slowly with their negative charge in the form of electrons that traverse space. The path of these electrons is now influenced by the strongly positively charged suns. Their paths become by this influence curved, and they describe hyperbolas round the suns. If their perihelial distance is less than the sun’s radius, they fall down on the sun, and diminish its positive charge. … the suns recover in mean from space as much negative electricity as they lose. The electric charges of the suns are in this respect very effective regulators. … From these considerations we see that a very effective balance of gains and losses of negative electricity is maintained.”

It is not clear whether Arrhenius held the inflowing streams of electrons responsible for the light of the solar corona and planetary nebulae only, stellar photospheres being illuminated thermally, or whether he effectively set up a model for an ‘electric universe’ in which they create all starlight. Moreover, he ruled out that the sun could disperse electrons in the form of ‘cathode rays’: “If one supposed, as some authors do, that the negative electricity was carried away from the sun by means of cathode rays, an effective circulation like that described above would be wholly impossible.” For whereas the influx of electrons towards the sun would be dominated by electricity, the pressure of radiation, a non-electric force, preponderated for the efflux.

Apart from the many equally notable contributors who have doubtless still been overlooked, this, then, was the scene when Kristian Birkeland entered the fray. Respecting many of his tenets, Birkeland reposed on the shoulders of these giants. Work on terrellae and solelli played a pivotal part in the formulation of his models, not only in order to explain the terrestrial aurora, but also the zodiacal light, cometary tails and the rings of Saturn. Particle streams emitted from the sun were essential to his thinking, but instead of being driven by radiation pressure on dust they took the form of ‘cathode rays’. Assuming that “the sun’s corona is of an electric origin”, Birkeland was able to model sunspots as the most likely source regions of these electron beams responsible for the earth’s aurora. Just as the magnetised solellus could only exhibit ‘sunspots’ – and all its other luminous features – upon the application of external electrical power in a near-vacuum, so the sun, which “on the whole is magnetic”, ought to be fuelled from outside. In his own words:

“Finally, it might be assumed – and this, according to the experimental analogies, seems the most probable assumption – that the sun, in relation to space, has an enormous negative electric tension of about 600 million volts.”

The sun owed most of its magnetism, thus Birkeland, ‘to corpuscular circular currents outside the sun’. By extension, “every star in the universe would be the seat and field of activity of electric forces of a strength that no one could imagine.”

In light of his long line of illustrious forerunners, which aspects of Birkeland’s vision were entirely original? The use of terrellae and solelli was not a novel offering any more than the notions of the solar wind, the earth’s magnetosphere and the aurora being powered electrically or by ‘cathode rays’. Yet credit to Birkeland does seem justified for cataloguing the most extensive field observations of the aurora, telluric currents and the zodiacal light up until then; for the experimental replication of sunspots; for the discovery that solar currents flow into the earth’s magnetosphere along geomagnetic field lines; and for the insight that these ‘field-aligned’ currents complete their circuits through the ionosphere horizontally or parallel with the earth’s surface.

What happened after Birkeland and into the modern period? Many of the notions contemplated by this array of early scientists continued to be accepted and developed – a heliomagnetic field, the solar wind, solar-terrestrial coupling, planetary magnetospheres and electromagnetic processes on the sun’s chromosphere, in its corona, in the zodiacal light, in the ion tails of comets and in planetary aurorae. But when it comes to more radical issues, such as the electrical causation of some or perhaps all starlight, Birkeland was rather the last representative of a scientific tradition than the first. The long-standing suspicion that the coronal glow is generated by external electrical currents was all but extinguished during the 1920s, when Arthur Eddington and George Gamow paved the way for the theory of stellar nucleosynthesis.

Electromagnetic models of the sun and other aspects of cosmology which had been tolerated without scorn and apparently even represented the prevailing paradigm during the late 19th century became anathema upon the birth of quantum physics and Einstein’s work. The few dissenting individuals who continued to investigate the more controversial electrical potentials of cosmology – Charles Bruce, Immanuel Velikovsky, Eric W. Crew, Hannes Alfvén, Ralph Juergens and their intellectual offspring – were repelled to the very fringes of the field, if not discharged unceremoniously. And although many have carried the torch since, perhaps it will take a successful demonstration on a contemporary solellus to reignite the debate in earnest – conducted on the same scale and with the same civility as was last displayed in academia a century ago. In the current situation, perhaps it all depends on who is in charge.

With thanks to Robert J. Johnson who pointed out a few flaws in an earlier draft.