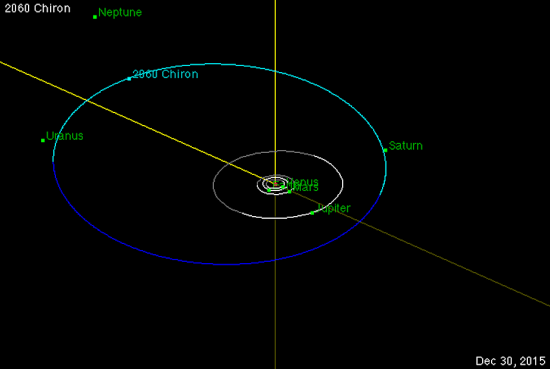 In the deepest regions of the solar system, billions of kilometers from the Sun, are several asteroid-sized icy rocks that are difficult for astronomers to classify. In a previous Picture of the Day article about Kuiper Belt Objects, it was noted that the largest of the planetoids, including Pluto and Charon, are described by conventional theories as nebular condensates left over after the major planets formed.

Scientists have detected other chunks of “debris” like Chiron, a centaur-class planetoid 170 kilometers in diameter, by using larger, more sensitive telescopes. Centaurs take their group name from Chiron, the tutor of Achilles, a mythical half-man, half-horse. Something that makes the centaurs so interesting to researchers is the colors that have been deduced from luminosity measurements. Most are dull gray, but there are some blue-green centaurs and 5145 Pholus is rust-red. Nothing in the current theoretical lexicon prepared the astronomers for the color variance.

As conventional theories propose, centaurs could originate in the Kuiper Belt. Neptune’s gravity might be strong enough to perturb the orbits of some KBOs, pulling them out of the Kuiper Belt’s main region about 500 billion kilometers from the Sun and sending them into proximity with the other gas giants where they are slung into eccentric orbits.

Because of their orbital instability, they are thought to stay near the outer planets for only a few tens of million years. Theories based on their elliptical orbits indicate that some centaurs could eventually be ejected from the solar system entirely, whereas the gas giant planets might consume others. Other centaurs are speculated to fall into the inner solar system where they transform into short-period or Jupiter-family comets.

The Jupiter-family comets move at high velocities, revolving every 20 years or less, with most solar orbits taking about 8 years. Some astronomers have suggested that the short-period comets might also be accelerated back into the outer solar system if they catch a “gravity boost” from Jupiter, once again becoming centaurs. Chiron itself manifests a coma of gas and dust whenever it reaches its closest approach to the Sun, although it does not grow a tail. Various centaurs exhibit this anomalous behavior, so they are sometimes referred to as asteroid/comets.

Centaurs are very faint even with a 10-meter optical telescope, so spectrographic analysis is impossible. However, by passing the gathered light through three different filters a ratio of brightness in the three bands reveals the spectral energy distribution, which is interpreted as color. Why do the centaurs have such color variations? No one is sure at this point. Surface composition is one theory, and deposition of external material from “meteor polishing” is another.

The Electric Universe suggests a reason for the different colored centaurs as well as for the different chemical compositions that make up rocky planets and moons. In a plasma cosmogony hypothesis, the stars are formed when cosmic Birkeland currents twist around one another, creating z-pinch regions that compress the plasma into a solid. Laboratory experiments have shown that such compression zones are the most likely candidates for star formation and not collapsing nebulae, which is the 18th century theory to which astrophysicists still cling.

When the stars are born, they are most likely under extreme electrical stress. If such is the case, they will split into one or more daughter stars, thereby equalizing their electrical potential.

“The fission process is repeated in further electrical disturbances by flaring red dwarfs and gas giant planets ejecting rocky and icy planets, moons, comets, asteroids and meteorites. Planetary systems may also be acquired over time by electrical capture of independent interstellar bodies such as dim brown dwarf stars. That seems the best explanation for our ‘fruit salad’ of a solar system. Capture of a brown dwarf requires that the dim star accommodate to a new electrical environment within the plasma sheath of the Sun. The brown dwarf flares and ejects matter, which becomes planets, moons and smaller debris. The ‘dead’ dwarf star becomes a gas giant planet.

“This is not the 4.5 billion year evolutionary story of the clockwork solar system taught to us in Astronomy I. There is no primordial nebular ‘stuff’ of which all objects in the solar system were formed at the one time. The ‘stuff’ of which stars are made has been differentiated and altered by plasma discharge processes. All stars produce heavy elements in their photospheric discharges, which alters their internal composition with time. And the ‘stuff’ expelled electrically from inside stars and gas giants is further modified elementally, chemically and isotopically.”

The reason that there is so much variability in the solar system is because z-pinch compression is so powerful and plasma discharges are so energetic. Centaurs are colorful because they might have been ejected out of different gas giant planets. Optical instruments show that Neptune has a green color, Uranus a blue, Saturn a pale yellow and Jupiter a rusty red. Could the centaurs be exemplifying their parental traits?