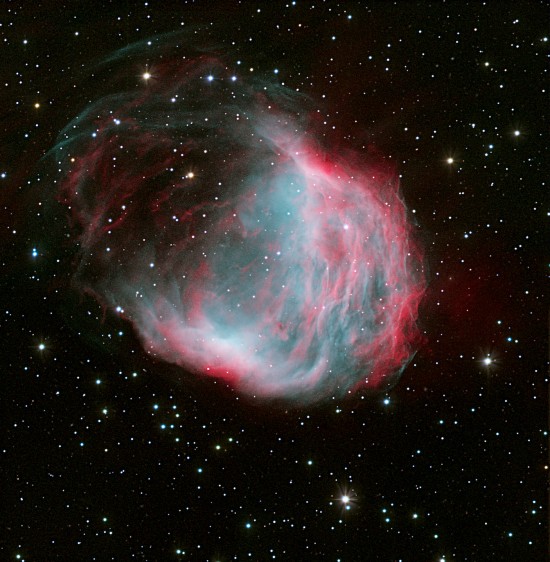 Why some stars shed their atmospheres is a mystery.

For many years, astrophysical models of stellar evolution have relied on mechanical action. The forces that shape the stars are attributed to the collapse of cold gas under gravitational influence. Common viewpoints see stars as whirling vortices of compressed matter heated to fusion temperatures by pressure, alone.

Compression, it is said, draws clouds of gas and dust a thousand times less dense than a puff of smoke into a region of increased density that coaxes even more material to collect there. Eventually, as conventional theories suggest, the atoms within the cloud can no longer resist the inward attraction and they fall into the well of nuclear fusion, initiating a self-sustaining reaction.

According to a recent press release, stars that are extremely massive live fast and die young. They rapidly “fuse” their hydrogen and helium into heavier elements that, in turn, fuse into elements that are heavier still. In their senescence, the radiative emissions from such stars are thought to be so intense that they “blow away” enormous quantities of stellar material. In some cases, they lose mass up to a million times faster than our own Sun. However, that process is highly speculative.

The Electric Star hypothesis resolves many of the distorted opinions that arise when astronomers misunderstand the role of plasma and electric fields in space. Rather than gravity and kinetic activity (heated gas), radiant emanations result from electric currents. More powerful electric flux results in more powerful energetic output. Electric discharges in plasma clouds create double layers, or sheaths, along their current axes. Positive charge builds up on one side and negative charge on the other. An electric field develops between the sides, and if enough current is applied, the sheath glows; otherwise it is invisible.

When electric charge flow along the sheaths, the currents spiral into filaments. The filaments attract each other, but rather than merging, they form zones of enormous compressive force known as z-pinches. Arc mode discharges might occur. Gravity, although it plays a small role in stellar evolution, is far too weak a force when compared to electric fields in plasma.

Since astronomers do not map the flow of electric charge through space, or consider its influence on stellar evolution, they overstate the case for gravitational models. The electrical input and output of the stars is not considered when theories are debated. By failing to give it credence, an entire line of investigation remains fallow.

Retired professor of electrical engineering Donald Scott provided a new look at stars in his book, The Electric Sky. Scott suggests that mass, temperature, and luminosity are not the only factors that should be considered when describing a star’s life cycle. The most important factor is the current density in Amperes per square meter (A/m^2) at the star’s surface. If the incoming current density increases, a star’s surface gets hotter, radiates shorter wavelengths, and becomes brighter. Therefore, the strength of the impinging current density, as well as diameter, are responsible for a star’s absolute brightness.

Massive stars might not be so massive after all. The intense radiation that is interpreted as an “atmosphere blowing away” is most likely due to high input currents triggering frequent bursts of stellar lightning. What appears to be a giant star might be a relatively small star with a large coma structure that is emitting a torrent of charged particles. Whether such stars live short or long lives has nothing to do with their gravitational mass.