Home Picture of the Day Wag the Dog 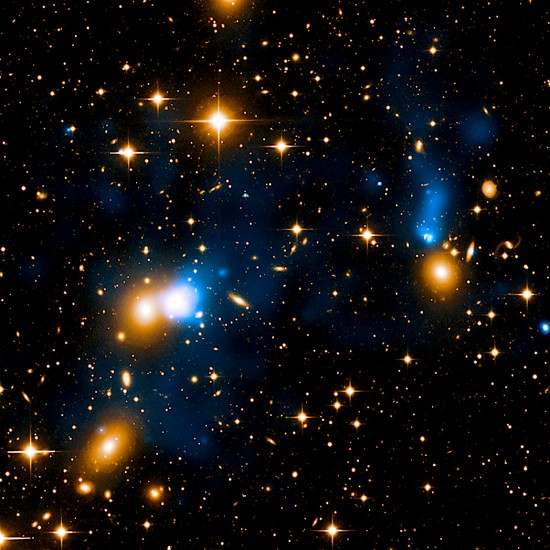 Interpreting observations should include an electrical perspective.

According to a recent press release, astronomers discovered a galactic filament extending outward from galaxy CGCG254-021 on a scale never before observed. As the announcement states: “This ribbon, or X-ray tail, is likely due to gas stripped from the galaxy as it moves through a vast cloud of hot intergalactic gas.”

It might be that the galaxy is “plunging into” galactic cluster Zwicky 8338 and the speed of its passage might be “stripping gas” from it as it passes. However, as many Pictures of the Day illustrate, kinetic effects from gas pressure and collisions is insufficient to describe the discoveries published in scientific journals. However, there is another force that makes more sense of the observations than mere friction and gravitational interaction: electricity.

As written previously, the cause and effect being observed in the Chandra images are the helical Birkeland currents that form when electricity flows through dusty plasma in space. The “tail” in the above illustration was imaged in the wavelengths of optical light and X-ray emissions.

According to astronomers, newly created stars that have recently collapsed out of a hydrogen gas cloud that CGCG254-021 disturbed and compressed are producing the X-rays. As standard theory dictates, heat from gravitational compaction is more than enough to initiate fusion, transmuting hydrogen into helium.

As a side note, it is because of stellar fusion theory that scientists have spent more than 50 years and billions of dollars building arcane devices, trying to replicate the process they believe is taking place in stellar cores. The inherent difficulty with the attempt is the instabilities that occur in plasma, naturally.

Plasma under pressure and high temperature threatens to destabilize every microsecond. Some plasma toroid machines squeeze a beam of ions into a tightly confined, pencil-thin stream, so that it will sustain the temperatures necessary for atomic fusion. The problem that arises over and over again is akin to squeezing a bicycle inner tube filled with air down into a smaller diameter. Since the pressure cannot be evenly applied to the entire inner tube all at once, little bubbles will keep popping out of the tube’s sidewall. The same thing happens in plasma-beam confinement. The plasma keeps “popping out” of its magnetic “bottle” and contacting the chamber walls, whereupon the fusion reaction stops instantly.

If astrophysicists and astronomers would sit down together with electrical engineers and plasma physicists, they would understand that CGCG254-021 is exhibiting electric z-pinch effects because of the rotating Birkeland currents in the “tail”. One of the hallmarks of plasma foci is that they glow in high-energy X-rays, gamma rays or ultra-violet, depending on how much current is available. They tend to form regions of extremely high density where the ions are actually forced together into “plasmoids”: doughnut-shaped bubbles that retain their individual shapes.

Such a thing could be happening at the greatest scale imaginable: clusters of galaxies thousands of millions of light-years in extent, forming gigantic whorls of energetic ions that discharge like lightning bolts.