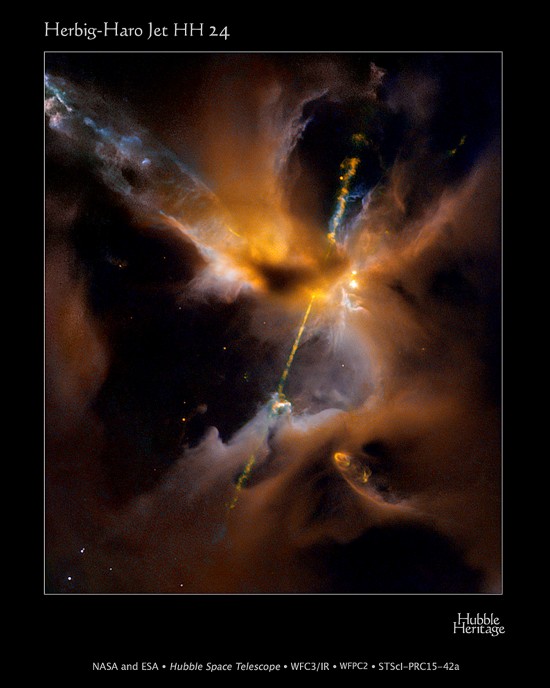 How can superheated gas create a jet almost 1500 light-years long?

According to a recent press release, collimated jets are normally considered to result from matter falling into the putative gravity field of a black hole. As stellar matter orbits closer to the black hole, it is accelerated to extreme velocities, causing violent collisions among the particles that can generate X-rays and other high frequency radiation. Eventually, somehow, the acceleration creates a powerful filamentary jet. Hubble’s images show that jets form close to a star rather than in the surrounding disk. Recent research is reconsidering the necessity for a disk to form a nozzle for collimating the jets, like a garden hose.

Electromagnetic fields are just one part of the story. Failing to realize that electric charge flow creates magnetic fields has led many physicists to model plasma in space without considering electricity. Nobel laureate Hannes Alfvén noted that plasma is “too complicated and awkward” for the tastes of mathematicians. It is “not at all suited for mathematically elegant theories” and requires laboratory experiments.

Electric Universe advocate Wal Thornhill wrote: “Plasma cosmology has one great advantage in that the phenomena are scaleable from galaxies down to stars, planets and the lab. So it is possible to bring cosmology back down to earth and do away with invisible dark matter, neutron stars, black holes and the Big Bang. They are unnecessary when the electric force is a thousand trillion trillion trillion times stronger than gravity!”