Home Picture of the Day That Dark Ribbon of Skyway

That Dark Ribbon of Skyway 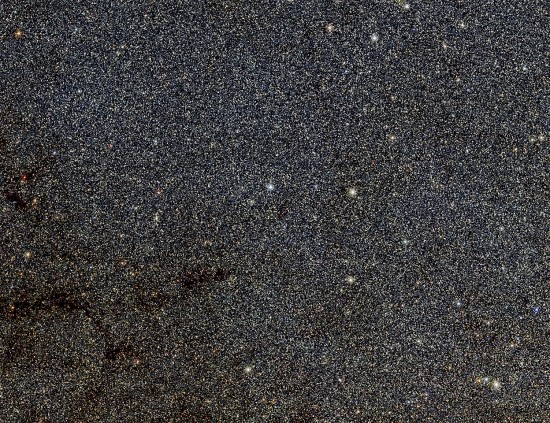 Plasma is electrically ionized. By definition, electrons are stripped from atomic nuclei in plasma, since electron orbital dynamics can be overcome by thermal and other energy sources. When regions in plasma develop excess charge, due to gravity or other influences, electric discharges can take place, forming magnetic sheaths along the axis of discharge. If there is enough charge flow, the sheath will glow; sometimes forming other sheaths within it. Those regions of isolated charge, or “cells”, are known as double layers.

Double layers induce intense electric fields, which accelerate charged particles. When electric charge spirals in an electromagnetic field, X-rays, extreme ultraviolet, and sometimes gamma rays are detected. Those electromagnetic forces create conductive channels called Birkeland currents: filaments that tend to attract each other in pairs. The electric fields that form along plasma strands can generate an attractive force orders of magnitude greater than gravity. Although, due to their isolated sheathes, instead of merging, the Birkeland currents twist into a helix that rotates faster as it compresses tighter.

The cosmos appears to be interlaced with electric circuits made up of energized filaments at every scale, composed of twisting Birkeland currents. At the largest scale, there are loads in the circuits converting electrical energy into rotational energy. They are known as galaxies.

According to a paper published in the journal, Astronomy and Astrophysics, astronomers located a previously unknown dark filament spanning the Milky Way’s bulge. By analyzing the spectra of “Red Clump”, or red giant stars that are in the so-called “helium-burning stage”, they found a sharp cutoff between two color regions, indicating to them an obscuring dust cloud called The Great Dark Lane.

The observations are not without problems. The first two, from an Electric Universe perspective, are the twin assumptions of main sequence stellar evolution and distance calculations via redshift. Many Pictures of the Day discuss those assumptions, so they will not be detailed here.

Electric Universe theorists insist that galactic evolution can better be explained in terms of large-scale plasma discharges that form coherent filaments. Why stars in galaxies tend to coalesce in long arcs like bright beads on a line is one of a hundred mysteries that conventional cosmology must confront. No gravity-only hypothesis can resolve the issue of star formation, in general, but what is seen within the barred spirals and elliptical whirlpools that congregate in million-light-year clusters continues to elude explanation.

Plasma physics fits observations and behaviors better than kinetics or gravity. As previously written, plasma is not a substance, it is an emergent phenomenon, so it can not be analyzed in terms of its component parts, it arises in response to complicated interactions.

The filaments of electric charge that move in closed circuits through plasma can attract matter to them over vast distances. Double layers might glow in visible or infrared light. However, plasma might also initiate dark discharges. Perhaps those are the filamentary “dark lanes” seen by astronomers.

Electric Universe advocates have long known that “radio lobes” far above the poles of active galaxies are the signature of Birkeland currents, while the spiral arms of some galaxies exhibit dark, twisted strands of material extending from their cores.

It is becoming increasingly obvious that the Milky Way shares characteristics with the rest of its galactic family. Its halo of stars, its filamentary structures, lobes of radiation, its microwave haze, and other observed phenomena point to the Milky Way’s electrical nature.

With apologies to Woody Guthrie