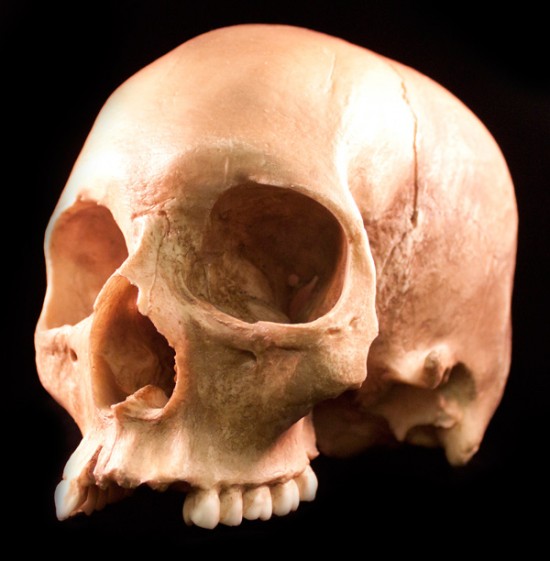 Biorhythms of the Earth and its Offspring

In 1982 experienced anthropologist and pharmacologist Francis Ivanhoe published the first of multiple studies in which he would catalog an important discovery for evolutionary science. Surveying all known Paleolithic human skulls, he witnessed a correlation between ancient increases in magnetic field strength and sudden brain size increases in humans, as well as cultural/evolutionary revolutions such as the widespread utilization of fire as a tool. These periods of increased geomagnetic field strength (recorded geologically) occurred during the ice ages we call the Mindel and the Würm. He discussed this finding in articles over the course of 30 years, publishing in both the Journal of Bioelectricity and the Journal of Human Evolution.

Ivanhoe proposed that the upper section of the hippocampus called Ammon’s horn – an arch with one-way nerve traffic driven by a strong current – might be acting as a transducer which feels the strength of Earth’s magnetic field and sends impulses to other brain structures to affect growth hormone production (prolactin specifically). Ivanhoe also pointed out that, among primates, humans are distinctive in the size of our hippocampus and the development of its connections with the hypothalamus. The hippocampus also contains magnetite, but more on that later.

The idea that humans are biologically connected to the Earth’s field is certainly not new to science, and there is more evidence to suggest the connection than there is to suggest otherwise. Perhaps the most important series of experiments to investigate that topic was led by Rutger Wever of the Max Plank Institute in Munich, utilizing two sensory-isolation bunkers made to house human residents for prolonged periods of time. Each was shielded from all conventional environmental cues to the outside world, such as sound, light, and heat, but one was additionally shielded from all electromagnetic influence. From 1964 to 1989 he observed the influence of electromagnetic forces on hundreds of participants, some living in the bunkers for up to two months. Various indicators of chemical and behavioral health were monitored throughout the experiment, and the electromagnetically-shielded bunker was designed so that people could be re-exposed to selected frequencies from a wide spectrum.

Those living without all environmental cues – but not deprived of contact with the Earth’s electromagnetic field – still behaviorally and biologically kept to a 24-hour rhythm (or one using the same ratio). Those deprived of electromagnetic frequencies not only lost any semblance of a circadian rhythm but also began to slip towards a critical loss of healthy timing between various bodily systems. One particular electromagnetic frequency which was key to such biological timing is the 10 hertz micro-pulsation in the Earth’s field. When re-introduced into the electromagnetically sealed room it restored proper timing between bodily systems, and also brought participants back into a consistent circadian rhythm!

Many experiments of such impact have taken place, hailing from a time when scientific disciplines were not so connected by the internet and the hosting of abstracts or full articles online. Such were times of the founding of strong beliefs about “what science has found” (and what it hasn’t). But scientific communities were not as all-knowing as public perception would imagine them to be, and they were certainly not magically without social politics or group-think.

Back in 1975 Richard Blakemore – just a graduate student at the time – noticed that a certain type of bacterium from the nearby salt flat of Cape Cod would always orient itself in a particular direction on his microscope slides, always towards magnetic north in fact. He continued studying this bacterium along with microbiologist Ralph Wolfe, and once the two isolated a pure strain of the species they approached Richard Frankel of MIT’s Magnetic lab and began looking for a mechanism at work in the tiny organism’s magnetic sense. They surprised the biology community when they found and documented that mechanism: micro-crystals of magnetite arranged in a neat line within a membrane. 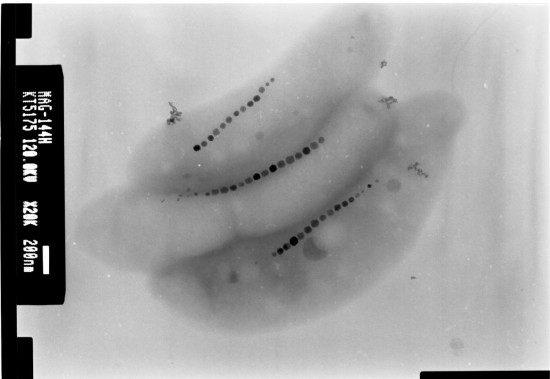 Three magnetotactic bacteria, each with a single line of magnetite crystals 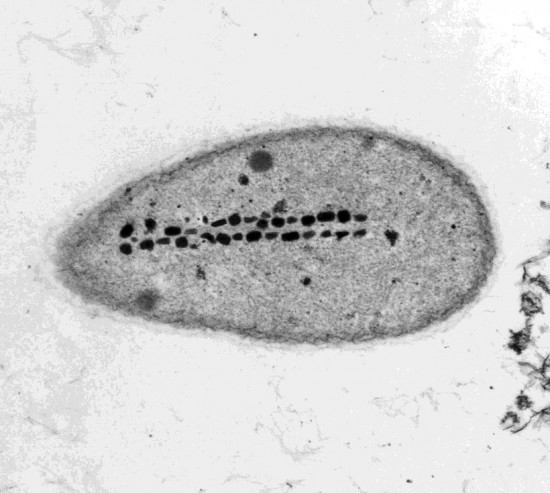 One bacteria which has two lines of magnetite

Magnetite is a metallic substance with high magnetic sensitivity that was traditionally thought to be formed only under extremely high temperatures and pressures in igneous or metamorphic rock. It was first discovered in a creature’s biology in 1962, where it’s presence on the tongue of marine mollusks suggested it was being used for its hardness, but not for something as fundamental and elusive as bionavigation. Whatever its uses, it has even been found in the likely presence of 4-billion year old microbial fossils on a meteorite from Mars (ALH84001, discovered in Antarctica).

It has been a natural hypothesis that magnetite may be involved in various organisms’ most stunning feats of navigation, and it lends biological clarity to certain behaviors observed in experiments with magnetism. North-seeking honeybees or bacteria can be reprogrammed into south-seekers by striking them with a brief magnetic pulse (Kirschvink & Kobayashi 1991), strongly supporting the idea that these behaviors rely upon a ferromagnetic material in the organism’s body. While many behavioral and anatomical experiments have investigated this aspect of biology in pigeons, some have also explored such biological features in humans.

In 1979 Robin Baker of the University of Manchester blindfolded high school students and equipped them with headbands, which either contained magnets or identically designed nonmagnetic brass bars. The students were then driven in a maze-like course around Leeds and out along a straight highway, where he stopped to have them write on cards their guess of the direction back to the school. Next he turned 135 degrees and drove to another location and had the students guess again. The students with fake magnets around their head had been able to guess the direction of the school quite reliably! Meanwhile students with real magnets around their heads had their direction sense significantly impaired.

Baker and other researchers continued their behavioral experiments, and the scientific community was more receptive to such phenomena now that it was known that organisms could synthesize magnetite and incorporate it into purposeful cellular systems. In the 1990’s magnetite was also conclusively discovered by multiple researchers as a purposeful element in the human brain, illuminating new pathways of scientific discussion. 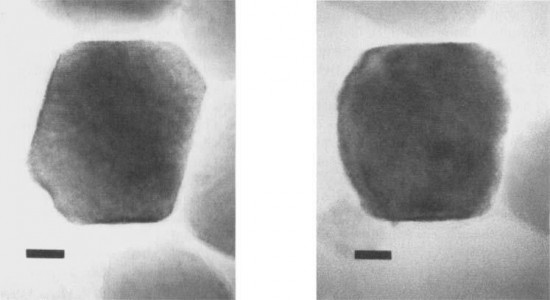 Recent theories have considered the potential role of magnetite in plant memory (yes that’s really a thing, just do a search for magnetite and plant memory), and in human short-term or long-term memory (Banaclocha & Bókkob, 2010). The hippocampus has long been viewed as a center of memory formation, so of course those researching Alzheimer’s disease have paid attention to new developments in our understanding of its biology, including its magnetite content. In recent decades scientists have been investigating why increased magnetic materials of inferior structure in the hippocampus are correlated with Alzhiemer’s disease (Hautot et al, 2003. Quintana et al, 2006).

Francis Ivanhoe’s theory that this brain region senses the Earth’s field strength and might influence brain anatomy in response to some geomagnetic phenomena is indeed a bridge to many new hypotheses, or a source of sudden clarity for existing cultural observations. It is well known in the public science literature that schizophrenia is consistently accompanied by changes in the anatomy and activation patterns of the hippocampus. In 1963 electrophysiologist Robert O. Becker and psychologist Howard Friedman pooled their clinical resources to examine rates of schizophrenia admittance and psychiatric ward behavior in relation to geomagnetic disturbances.

Looking at the admittance data of 8 hospitals in relationship to 67 magnetic storms over the course of 4 years, their sample size of 28,000 admissions clearly showed that significantly more people were signed into psychiatric services following magnetic turbulence, compared to periods when the field was stable. Correlation does not equal causation of course, but they further examined 12 schizophrenic patients at the local VA hospital who were scheduled to remain there for the next few months with no changes in treatment.

To do this, they asked the ward nurses to fill out a standard patient evaluation at regular intervals (once per 8-hour shift), while they compared the behavioral reports with incoming cosmic ray activity – seen as a more reliable way to differentiate between magnetic storms and other routine variations in the Earth’s field. Almost all of the subjects displayed behavioral changes 1-2 days after cosmic ray events, particularly indicative of the pattern of geomagnetic turbulence that occurs after low-energy cosmic ray flares from the sun make landfall upon the outer anatomy of the Earth’s field.

What new discoveries of consciousness science and what new methods of medicine might be available in our society today if the EMF work of scientists like Rutger Wever had been palatable to the human institutions of their time. These ideas are of course still resisted by many, but almost entirely on the simple grounds of disbelief that one’s society could fail to notify one about such interesting or important possibilities.

Is a hippocampal role of feeling the Earth’s life-sustaining micro-pulsations in any way related to the shrinking of the hippocampus observed in those who suffer from severe depression? Do people experiencing clinical depression also have a hippocampus speckled with clusters of improperly formed magnetite?

And on a very different speculative note, consider that the hippocampus is very receptive to estrogen, which increases the size and number of its synapses. Does that scientific observation pertain at all to the self-identified “earthiness” among so many women who identify as feminine? In the small but meaningful snapshot of evolutionary history which is humanity’s cultural history, many such relationships have been intuited, imagined, or directly observed.

Creative consideration of such public theories is often vital to the progress of testable human knowledge. Humanity is collectively blessed whenever a smart individual has the personal initiative, funding, and social resources to examine such beliefs with an enthusiastic and open mind.

Alexander Fournier graduated John F. Kennedy University with a Masters Degree in Integral Psychology – a field specializing in the psychosocial analysis of individuals, groups, and belief systems. He is enthusiastic about resolving cultural misunderstandings between social groups, and helping the human species to become less accustomed to using heuristical/presumptuous reasoning. He can be reached at friendlyanalyst@gmail.com