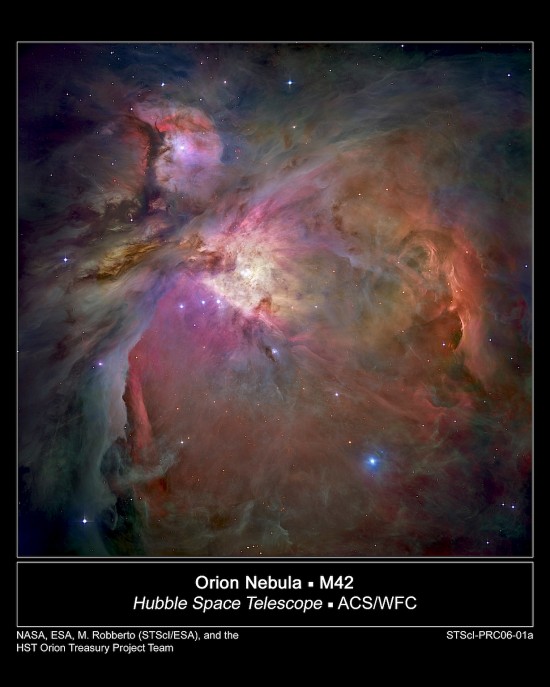 The Orion Nebula is visible to the naked eye in the constellation Orion; it is the second star in Orion’s sword. Astrophysicists believe several formations in the cloud are star-forming regions because high frequency light emanates from many active areas. Gamma rays, X-rays and ultra-violet are coming from “cosmic eggs”: what appear to be the glowing tips of condensed gas balls that have “ignited” in fusion reactions.

Conventional astronomers do no know how stars threw off clouds of gas and dust that eventually become other stars. Primarily, because stars are not made of gas and dust. A star is the focus of Birkeland currents that make up circuits flowing around the galaxy. Electromagnetic pinches squeeze plasma into a star, forming a toroidal current around the star’s equator. Current density causes plasma in the ring to glow. The Electric Universe explains such phenomena in terms of plasma structures, and they behave according to the laws of electrical discharges and circuits.

Instead of mechanical action and cold gas, the Orion Nebula’s radiant new stars were created in a boost of electric current. It is not necessary to prevent young stars from heating up by shielding them in cold dust. The electrical sheath around a new star receives input from the galactic Birkeland currents in which it is immersed and gets pushed into the “glow” discharge state. Gravity has little if anything to do with the processes of star formation.

The consensus view is that cold dust is a necessary ingredient when stars condense out of nebulae. When gas and dust start to collapse into a new star it naturally warms up and radiates energy. As the theory states, outward pressure is created that opposes the inward force of gravity. If the outward force wins and overcomes the force of gravity, the atoms in the gas will never be compressed enough to undergo nuclear fusion. However, if the dust in the nebula is cold enough, it allows the heat created in the gravitational collapse to be radiated away, therefore a new star can ignite.

On the other hand, when the Electric Universe theory is considered, cold nebulae are evidence of electrical activity even at temperatures near absolute zero. Bipolar symmetry is typical of most nebulae, and most of them are dense enough to emit light because they are extremely hot in some regions. The middle of the Orion nebula is cold: radio measurements indicate that dust clouds around the inner part are only one degree above absolute zero. The center of the nebula is visible because dust particles reflect light from the star.

The correct model for a nebula is a neon lamp that emits light only at the excitation frequency of that specific gas. Electricity passing through the tube causes the neon plasma to glow a pale yellow. Astronomers say a shock wave from a supernova is able to initiate many frequencies of light due to the heating of compressed gas. But, since more than 90% of the light from planetary nebulae is in the frequency range of ionized oxygen, then they should be thought of as oxygen discharge tubes and not as clouds of gas.

Astronomers have infected physicists with the “hot gas” theory, causing a 50 year failed experiment with nuclear fusion. Squeezing hot gas into a volume small enough for fusion to take place has not worked. Utilizing theories of plasma’s collective qualities might be a more productive path.