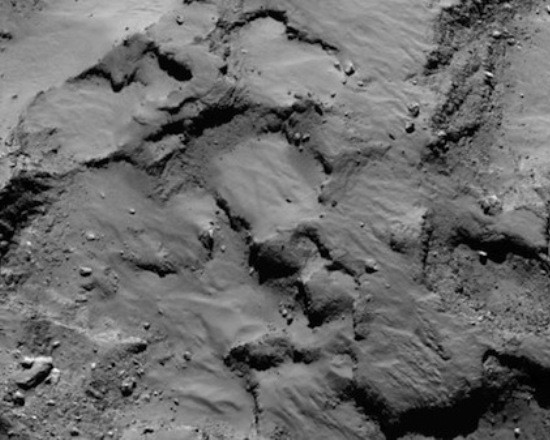 Electrical Geology of Pluto and Comet 67P
By Stuart Talbott

It seems that NASA’s New Horizons mission to the dwarf planet Pluto continues to provide planetary scientists with new challenges and deepening mysteries. At the top of the list are the recent images of the planet’s surface revealing features that look like sand dunes. That’s a problem because Pluto’s atmosphere is far too thin and weak at present to generate the necessary winds for dune creation.

New Horizons principal investigator Alan Stern said of the discovery, “We have detected vast fields of features that look like dunes. Now we are being careful to say they look like dunes. They may or may not actually be dunes. Their origin is under debate.” 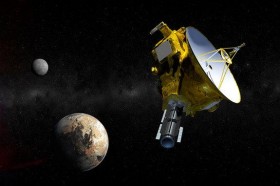 The New Horizons team is now suggesting that Pluto’s atmosphere must have once been dense enough to produce dunes or dune-like features—if only some exotic force could be called upon to drive the necessary winds.

Improbable dunes are not new to planetary science.  In recent years we’ve noted “impossible” dunes on bodies throughout the solar system, including the planet Mars. In previous Space News episodes, we have even reported on the discovery of remarkable sand dunes on the comet 67P—remarkable because under standard assumptions no comet should possess the atmosphere necessary to create dunes. Until very recently, comet science never ventured into speculations about winds on a comet’s surface.

Yet images of a giant rock named Cheops on comet 67P revealed what appeared to be wind steaks trailing away from the rock. Not only that, Rosetta scientists subsequently found more than a dozen similarly “wind-streaked” rocks or boulders. Initially, mission scientists speculated that the comet’s jets must have somehow created the improbable wind, a concept they ratified formally by giving the imagined process a name. They called it “localized gas-driven transport.”

More recently, comet investigators have proposed an even more extreme process on the comet similar to saltation in Earth geology.  That process would not just require an atmosphere, but turbulent winds acting on the comet’s surface with energies beyond anything previously imagined. 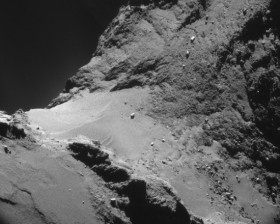 Given the scale of the mysteries, we can only urge NASA and the European Space Agency to open discussion of an electric comet hypothesis.  For theorists of the Electric Universe and the Thunderbolts Project, the electric behavior of comets is simply undeniable. In the case of Comet 67P, the question is logically posed by the greatly enhanced electron fluxes and densities close to the comet nucleus.  But many additional layers of evidence have accumulated as well, up to the point of a virtual certainty: a comet’s electrical activity is fundamental to the very nature of these bodies.  Only electric fields and consequent electric discharge will explain the filamentary comet jets.  Indeed, experiments with electric fields on dusty surfaces, including demonstrations by Billy Yelverton, have reproduced numerous cometary surface features, including all manner of sand dunes. The freshly coined language of “localized gas-driven transport” becomes unnecessary the moment one considers the demonstrable attributes of electric discharge activity — not just the ability to transport dust but to configure dust into all of the defining surface features of 67P.

In last February’s Space News, The Impossible Dunes of Comet 67P, we registered a prediction— that dramatic and seemingly inexplicable changes on the surface of 67P would be imaged by the Rosetta Spacecraft.

ESA scientists have recently released images taken over a period of 6 weeks, beginning in late May. The images reveal erosional features up to hundreds of meters in diameter forming at a rate exponentially faster than predicted by standard comet theory. As one mission scientist recently stated, “These spectacular changes are proceeding extremely rapidly, with the rims of the features expanding by a few tens of centimeters per hour. This highlights the complexity of the physical processes involved.”

The ESA website acknowledges that the sublimation of conjectured subsurface ices could not begin to explain the observed phenomena. They state of the features, “The rapid rate of expansion is unexpected, however: models of sunlight-driven sublimation would predict erosion rates of just a few centimeters per hour, and thus the scientists believe that additional mechanisms are required to explain the observations.”

Scientists didn’t convincingly explain the same edge-recession features on comet Tempel 1 [“..depressions that have merged together over time, also as a result of erosion caused by volatile substances evaporating from the comet.”]. It is a characteristic effect of Electric Discharge Machining.

The greatest stumbling block for understanding Pluto is the fabricated story of its formation and billions of years of assumed history. Its atmosphere and surface features fit better with recent capture, perhaps as part of the Saturnian entourage, given Pluto’s substantial nitrogen atmosphere. Alternatively, Pluto’s axial tilt suggests a possible former association with Uranus. This is the path for future investigation — looking for ‘family resemblances; not force-fitting data into an entirely fictional history of the solar system.

Message to NASA scientists: before the opportunity is forgotten, please consider the receding margins of dust or silicate material around the pathway of an electric current, as seen in this experiment by Billy Yelverton.

Electrical forces can readily produce dunes on comets. But what about the dunes of Pluto?  The planet moves on an elliptical orbit through a weak heliospheric electric field. That fact alone makes the question well worth asking—whether the surface of the dwarf planet, immersed in electric fields and buffeted by ionic winds, is giving us a compelling demonstration of electrical activity similar to that of comets.  The fact that Pluto is now known to exhibit a comet-like tail is just another reason to ask the question. 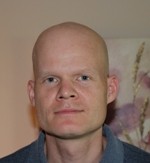 Stuart Talbott is the producer of Space News from the Electric Universe, a regular feature of The Thunderbolts Project YouTube Channel since 2012.  Electric Geology of Pluto and Comet 67P was posted Sept 28, 2015.