Home Picture of the Day Fixing a Hole 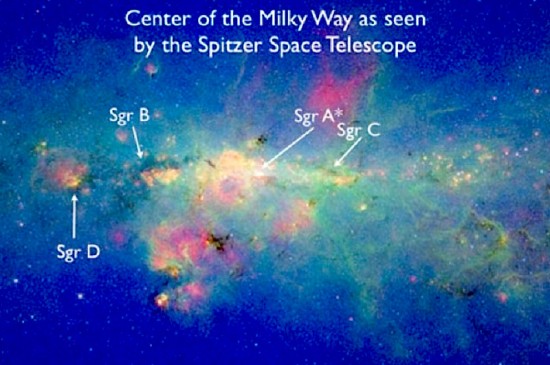 The Milky Way is said to harbor one or more black holes. Credit: NASA/ESA/Spitzer

The Max Planck Institute added more fuel to the black hole physics fire: the ejection of a “supermassive black hole” (SMBH) from its parent galaxy. Researchers in the department of Extraterrestrial Physics measured what appear to be gravity waves from a so-called “ejection event”.

According to conventional cosmological theories, black holes are formed when a star with a mass approximately five times that of our sun uses up its thermonuclear fuel and collapses under the force of its own gravity. Because the equations that describe gravity can be manipulated in irrational ways, some solutions imply that such a large star can contract into a zero volume containing infinite inertial mass. Astrophysicists have contended for years that black holes are real and that their effects can be observed, although they are invisible to detection.

As theories suggest, black holes possess a gravitational attraction of such intensity that not even electromagnetic radiation can escape the event horizon. Thus, no direct evidence of a black hole’s existence can be measured, only the hypothetical effects of the extreme gravity. Such effects are said to be gamma ray emissions, X-rays and extreme ultraviolet radiation from the gases and dust as they are compressed into smaller and smaller spaces before being drawn down into oblivion.

According to the team from Max Planck, gravity waves of colossal magnitude spread out from Quasar SDSS J092712.65+294344.0 as it ejected a few hundred million solar masses of gravitational energy from its nucleus. Gravity waves are another theoretical construct with no observational evidence to confirm their existence. They are inferred by the detection of broad-spectrum emission lines from the hot gas that surrounds the black hole – an indication of gravity waves compacting the gas as they ripple through the region. But is that what is actually happening?

The research team’s observations are of Doppler-shifted Fraunhofer lines in the spectrum of J0927. Due to “red-shift equals distance and speed” calculations, the “accretion disk” of matter surrounding the black hole is said to be moving at 2650 kilometers per second. The acceleration is presumed to be from the “recoil” of two black holes colliding, causing them to rebound and fly out of their parent galaxy as a single, supermassive combination of the two.

In previous Picture of the Day articles, it was noted that the idea of black holes and the indirect “evidence” for them that has been presented by the scientific community is questionable, at best. Any substance with a “multimillion-degree” temperature is not a gas but is ionized plasma. What the Max Planck scientists fail to realize is that the X-rays they are seeing is synchrotron radiation and not the incandescent glow of hot gas. The X-rays (and the gamma rays and ultraviolet light) are due to electrons spiraling along helical magnetic fields.

J092712.65+294344.0 is under extreme electrical stress as are all quasars. For the quasar to emit such incredible energies through simple gravitational compression, the dust and gas would have to be so dense that it would exceed the amount of material a galaxy can contain. However, the research team at Max Planck are mathematicians, which allows them to work through densities without limit. The black holes whose effects are supposed to be influencing time and space throughout the Universe miss the amazing force of electricity.