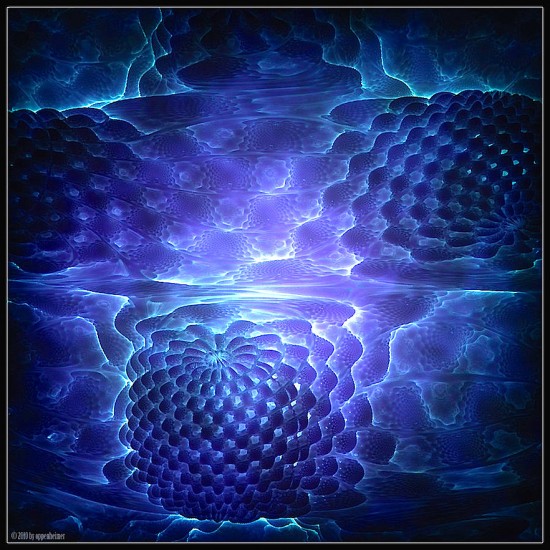 “Dark Matter” by Oppenheimer at DeviantArt.

Dark matter theory is in the news again.

Consensus science states that the Big Bang created all matter and energy—including gravity. Every cosmological theory is now based on that core principal. However, astrophysicists believe that something is missing in their gravitational equations: without adding dark matter factors there is not enough gravity in the Universe to account for galaxies bunching together.

As observations seem to indicate, galaxy clusters should have slowed down considerably over the last few billion years and not maintained high velocities, some of which approach 90% of light-speed. Massive clusters should also not be as large as they are so soon after the Big Bang. It is a troublesome anomaly: how did they accrete so much mass so quickly? Adding to the problems of standard gravity-only views of the Universe, more remote galaxies look like they are accelerating as they recede.

Astronomers first postulated cold or exotic forms of matter when they noticed that the stars at the edge of a spiral galaxy were revolving at the same angular speed as stars closer to the center. Newtonian mechanics states that stars farther away from the center should be moving more slowly. Therefore, astronomers assumed that a dark form of matter was imparting extra speed to the stars.

How does gravity bind the edges of galaxies into a disk? Galaxies and galaxy clusters should be denser in their cores and then gradually fade into wispy boundaries, yet many have rims of tightly knit stars and gas. Some have coherent structures like arms or bars. How do galaxies spin so fast without flying apart? The only alternative that is offered is that gravity acts differently as conditions change. No mention of electricity and its powerful fields and forces. Only dark matter is allowed to account for “mysterious” observations.

Since dark matter particles are not detectable by standard instruments, and are thought to be rather massive, researchers from the University of Southampton’s Department of Physics and Astronomy propose that an “intermediate” particle might help them understand how to build devices that can detect dark matter.

It was once thought that cold, non-radiating matter (such as burned-out stars or large planets) exerted forces on galactic clusters. Those “normal” but invisible structures were called MAssive Compact Halo Objects (MACHOs). However, years of investigation returned no discoveries. This led researchers to acknowledge that MACHOs are not dark matter candidates.

Weakly Interacting Massive Particles (WIMP) were competing with MACHO theory for years. With the demise of MACHOs, scientists hoped that a subatomic particle might account for the necessary gravitational attraction they say is caused by dark matter.

According to the press release, “… a nanoparticle, suspended in space and exposed directly to the flow of Dark Matter, will be pushed downstream and sensitive monitoring of this particle’s position will reveal information about the nature of this Dark Matter particle, if it exists.”

“Our candidate particle sounds crazy, but currently there seem to be no experiments or observations which could rule it out. Dark Matter is one of the most important unsolved problems in modern physics, and we hope that our suggestion will inspire others to develop detailed particle theory and even experimental tests,” said Dr. James Bateman.

It is a common theme in Picture of the Day articles that anyone familiar with plasma physics knows that plasma makes up 99.99% of the Universe. Perhaps the theoreticians should look to a science that is basic and foundational rather than inventing brand new sciences and arguing about which is more feasible.

In an Electric Universe, moving electric charges drive the galaxies. Laboratory experiments confirm that Birkeland current filaments can create structures that resemble spiral galaxies. Birkeland currents have a longer-range attractive force than gravity—diminishing with the square root of the distance from the current axis—which could account for the anomalous movement of stars as they revolve around the galactic core.

It is the flow of electricity through plasma that initiates what can be observed with space-based telescopes. It is electric charges moving through the cosmos that should be the focus of research. Astronomers should stop fumbling in the dark.