Notes on an Incipient Cosmos Part Three [DO NOT RE-RUN] 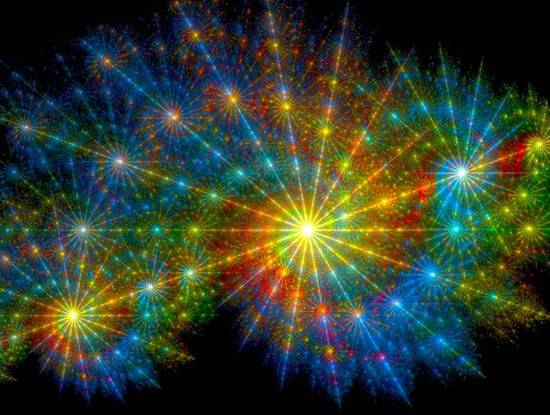 Thinking is done with nerves and words. Nerves don’t transmit information: the discharge of one nerve stimulates another to discharge, discharges of many nerves are linked and sorted into patterns of activation, and the patterns are rendered into words and arranged into narratives, or models.1 Somewhere during the rendering and the arranging, meaning and understanding—and thinking—arise. Between the sensory reactivity of nerves and the modeling that makes sense of the reactivity lies a creative act of putting it into words. Language adds abstraction, generality, and viewpoint. It adds the virtual subject at the center of viewpoint and the lexical object that is viewed. Not every rendering is meaningful; not every arrangement is understandable; not every model makes sense. But the truth of a model is a lexical judgment about it. Had Shakespeare made Hamlet a philosopher of science instead of a prince, Hamlet might have declared, “There is nothing either true or false, but thinking makes it so.” This doesn’t mean that truth is whimsical but that it’s a matter of thoughtfulness.2

In this regard, it’s useful to distinguish at least two of the many ways the word “truth” is used. Hermann Weyl remarked over half a century ago, “What is immediately experienced is subjective and absolute …; the objective world … is relative…. [T]his pair of opposites, subjective-absolute and objective-relative seems to me to contain one of the most profound epistemological truths which can be gathered from the study of nature.”3 A plaque on the wall of a local medical laboratory puts it in simpler terms: “It’s easier to take measurements than to know what you’re measuring.” That nerves are activated is undeniable, but the meaning is ambiguous. Interpreting the activations with respect to other activations that are called theories, especially if one’s colleagues agree with the interpretation, converts them into meaningful objective facts—but only because of their relationship to the theories, that is to say, relative to the theories. Subjective truth, then, is absolute in its existence but ambiguous in meaning; objective truth is (or can be made) absolute in its meaning, but it necessarily will be related to a set of general statements whose application to any particular situation is a matter to be decided.4

Another way to think of this is that theories populate the objective world with “things.” A meter needle points to 5. In terms of nerves, this is an activation, already extensively processed and interpreted, that results in saying, The meter needle points to 5. Call these kinds of activations “data.” Further processing and activation (although they may not be subsequent in time) result in saying, The potential difference across this resistor is 5 volts. Call these kinds of activations “facts.” “Things” appear between the data and the facts, and those things are supplied by the general statements of a theory. Data tells us that “it” is; theory tells us what “it” is, how to interpret, what words to use. Is an ion a particle with momentum or a current carrier in a circuit? An astronomer with a theory of mechanics will see ions impacting on the surface of Io. A plasma physicist with a theory of Bennett pinches will see a plasma-focus discharge.5 Is a star a speck of gravitationally compacted matter isolated in the midst of emptiness? Or is it an enormous plasma sheath interacting with interstellar plasma, and the higher-density speck of optically radiating matter at the center is an unimportant residue? Or is it something not yet imagined for lack of theories and facts?

If facts are particular interpretations of data with respect to some theory, which theory is a collection of general statements, then a model is the narrative that combines facts and theory. A model conciliates facts and theories into a coherent whole in which statements deduced from theory correspond to statements interpreted from data. Stephen Toulmin wrote of “the continual interaction of theory with fact—the way in which theories are built on facts, while at the same time giving significance to them and even determining what are ‘facts’ for us at all….”6 The “things” of reality are, profoundly, words. (I write “profoundly” to counter the common disparagement of language as superficial.) An appeal to make things “more real”—more absolute—collapses on the futility of trying to talk about them without talking. The ineffable reverts to the ambiguity of the subjective-absolute: the meter reading will not give you “volts.”

Comments about “truth” and “objectivity” usually bring up “reality” as well, so it may be useful to comment on that. Poet Wallace Stevens mirrored Weyl’s epistemic opposites when he distinguished between a Platonic reality and a poetic one. In the former, we “draw ourselves away from the unsubstantial, fluctuating facts of the world about us and establish some communion with the objects which are apprehended by thought and not sense.” In the latter, reality “impinges upon us from outside, the sense that we can touch and feel a solid reality which does not wholly dissolve itself into the conceptions of our own minds. It is the individual and particular that does this.” He echoes the previous comments about “things”: “There is in reality an aspect of individuality at which every form of rational explanation stops short…. Reality is not the thing but the aspect of the thing.”7 Rational explanation is what turns aspects into things—at the expense of leaving “a solid reality” behind.

The tension between these two realities appears as contradiction when the two are not distinguished, as when someone asserts that the “things” of a model are “really out there” apart from cognitive operations. The “out there” is itself a cognitive framework for organizing and understanding sensory stimuli. The objective world is not something alien to human thought but is constructed by thought for the purposes of thought. Thought draws a line in the sensory sand that enables one to divide sensations into “me” and “not me.” It’s useful to consider things in relation to other things (the ball reflects 700 nm wavelength light) instead of in relation to the observer (the ball is red). The claim for a non-cognitive “really out there” attempts to imbue the “objects which are apprehended by thought” with the absolute there-ness that “impinges upon us.” The consequence is to reify abstractions and to mystify appearances.

The two realities cannot be reconciled. The claim that scientific theories “approach reality” nullifies itself upon realizing that an approachable reality is necessarily a hypothetical one. If our knowledge is approaching reality, then we have no knowledge of reality. Our compass tells us only where we’ve been; our rod tells us only how far we’ve come; they provide not a clue about where we’re going. Furthermore, historical studies have undermined the claim for conceptual continuity of theories,8 which would be necessary for an “approach.” A case can be made for instrumental and technological continuity in science, but the theories and models are discrete and incommensurable.

The objects of our thought pass through the appearances that impinge on us like wisps of fog through a forest. Refusing to conflate the insubstantial certainties of thought with the substantial illusiveness of appearances requires us to give up the presumption of a singular reality, at least insofar as we can talk about it in any scientific sense. We can then appreciate the truthfulness of the discarded theories of past times; we can anticipate the demise of currently accepted theories; and we can understand why scientific revolutions are inevitable.

This incommensurability, noted most famously by Thomas Kuhn in his 1962 essay, The Structure of Scientific Revolutions, means that changing a model will change the “things” that populate the objective world. “Led by a new paradigm, scientists adopt new instruments and look in new places. Even more important, during revolutions scientists see new and different things when looking with familiar instruments in places they have looked before.”6 “[T]he proponents of competing paradigms practice their trades in different worlds…. [They] see different things when they look from the same point in the same direction.”7 Between the looking and the seeing lies the land of imagination. This is the birthplace of both models and fantasies. Distinguishing between the things of science and the things of science fiction is beyond the scope of this essay, but the reader should be aware that “science” for the adherents of one model will appear to be “science fiction” for the adherents of another model. They may be looking at the same data, but they see different realities, different facts, different things.

The act of creativity, the place of imagination, between reactivity and making sense of reactivity is a kind of cognitive artistry. The “making” of sense may be meaningfully related to the “making” attributed to poets from which the word “poetry” derives: the Greek “poiein,” to make or to create. Wallace Stevens wrote disapprovingly of “the extraction of a meaning from a poem and appraisement of it by rational standards of truth ….”8 One could write equally disapprovingly of the extraction of ingenuity from a theory and the denial of its imaginative wellsprings by rational standards of truth. With caution against extending the metaphor too far, it makes a certain amount of sense to think of science as conceptual art: brushing measurements onto an imaginative canvas to create a truthful model. Less poetically, Stephen Toulmin comments, “Science progresses, not by recognizing the truth of new observations alone, but by making sense of them.”9 There can be more than one “making.” And, as I will describe next, the makings will compete for acceptance.

1The habits of grammar press for appending a prepositional phrase: a model of something. The usual phrase in this context is “of reality.” But as will be discussed, the word “reality” is fraught with ambiguity. For clarity, models are best left to stand alone as cognitive–lexical constructs in their own right.

2 This “thumbnail theory” is based on The Sensory Order by F. A. Hayek, The University of Chicago Press, 1952, a summary of the work in theoretical psychology done by Helmholtz, Mach, et al around the beginning of the last century. Their work appears to have been forgotten; many of the more recent findings of cognitive science and neuroscience “reinvent the wheel” uncovered a century ago. Hayek worked primarily in economics and was awarded a Nobel Prize for that work; this mid-career book on the psychology of sensation has itself been neglected.

3 Hermann Weyl, Philosophy of Mathematics and Natural Science, Princeton, 1949, p. 116. Perhaps it would be clearer to call it an “opposition of pairs.”

8 Thomas Kuhn, among others, complained about scientists—and especially textbooks—manufacturing facts to support a presumption of progress. “The depreciation of historical fact is deeply, and probably functionally, ingrained in the ideology of the scientific profession….The result is a persistent tendency to make the history of science look linear or cumulative….” Questions that are answered by presently accepted theories are projected back onto history, giving the appearance that today’s clever scientists have solved yesterday’s puzzles. But often the questions were not and could not even have been asked within the intellectual constraints of yesterday’s models. Not only are the answers new, the questions are new. “But it is just this sort of change in the formulation of questions and answers that…lies at the heart of the most significant episodes of scientific development.” Thomas S. Kuhn, The Structure of Scientific Revolutions, Third Ed., The University of Chicago Press, 1996, pp. 138-140.

9 Mary Hesse provides a review and discussion of this issue in Revolutions and Reconstructions in the Philosophy of Science, Indiana University Press, 1980. “The history of science has already sufficiently demonstrated that successive acceptable theories are often in radical conceptual contradiction with each other. The succession of theories of the atom, for example, exhibits no ‘convergence’ in descriptions of the nature of fundamental particles, but oscillates between continuity and discontinuity, field conceptions and particle conceptions, and even speculatively among different topologies of space.”