Home Picture of the Day Lacking in Strength 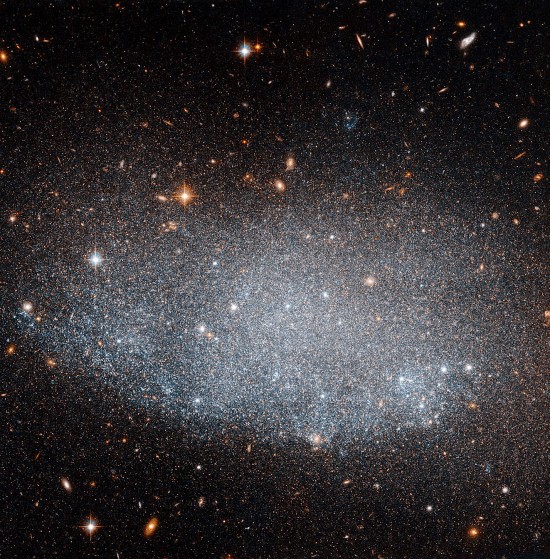 Dwarf galaxies do not appear to follow conventional models of galaxy development.

The Milky Way galaxy is not a solitary wanderer; it is accompanied by dozens of smaller galaxies with a more diffuse and irregular structure. As conventional models suggest, there are too few dwarf companions in orbit, as well as issues with their locations. Instead of being distributed in a spherical shell, they lie in the same plane as the galactic disk.

According to a recent press release, UGC 8201 is “at an important phase in its evolution”. As the announcement states, UGC 8201 produced “a high number of newborn bright stars”. However, star formation, as consensus theories state, requires a great deal of energy to initiate that process. Dwarf galaxies seem to lack the necessary power for it to begin.

This latest information builds on previous observations about the Milky Way’s companions from the Royal Astronomical Society in 2012. In that study, astronomers reported a vast stream of dwarf galaxies and star clusters that stretch out around our galaxy for 1 million light-years (using conventional distance measurements).

Problems with conventional theories start by assuming that galaxies are gravity-based structures obeying the laws of mechanics and momentum. In an Electric Universe, however, they are not “whirlpools of stars” that depend on gravity, a force that is extremely weak when compared to electromagnetism. Galaxies can be thought of as electrically active conglomerations of stars, each star is the locus of celectric harge flow. Electricity moving through dusty plasma is responsible for the births of stars and galaxies. Such flows of electricity are commonly called Birkeland currents after their discoverer, Kristian Birkeland.

Electricity flows through a galaxy like the Milky Way along the polar axis and then out through the spiral arms. There is most likely a circuit across the galactic disk that divides, flowing upward and downward back into the poles. This circuit receives its driving power from Birkeland currents that connect the galaxy with the rest of the Universe where, presumably, billion-light-year long strands of magnetically confined electric filaments are transmitting power from one end of space to the other.

Since dwarf galaxies are also rotating in the galactic plane along with the ring, it seems logical to conclude that one force is acting on both. Electromagnetism, being substantially more powerful than gravity, causes the ring of stars and the dwarf galaxies to be aligned at right angles to the axial intergalactic magnetic field. It also explains the source of the power needed to ignite new stars.