It is with pride and enthusiasm that we present the story below of the young Iranian scientist, Mohammad Reza Shafizadeh.   The Thunderbolts Project offered Mohammad a student scholarship to the EU2014 conference, and, after much work, he gained approval from the Iranian government to attend. Sadly, under the time constraints, it was not possible to gain a US Visa.  Now, however, we are confident that Mohammad will receive the necessary approvals to attend EU2015 as a conference scholar. What might have seemed beyond reach when we first heard from him 18-months ago is now hopefully close to realization.

The international conference scholarship program for students has demonstrated each year the power of person to person communications in matters of scientific understanding, reaching beyond all political and ideological boundaries.  Our hope is that everyone reading this will give due consideration to its transformational potential and consider donating to the EU2015 conference scholarship fund. 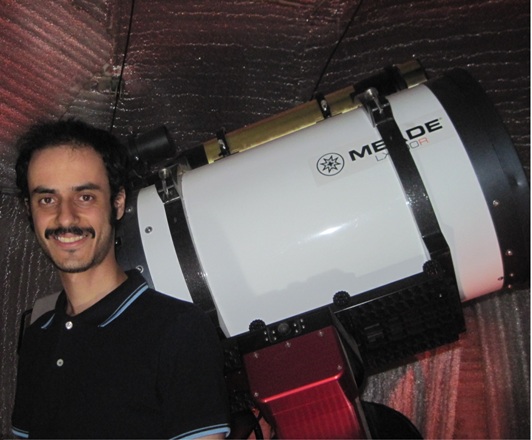 Persia! The name conjures up heroic, magical tales of mystical knowledge, with secret caves and flying carpets and desert vistas in silks and spices that were all part of every child’s wide-eyed wonder. Deeper investigation soon reveals that the legends and mythology were painted around something much more grounded—the development of world-leading systems of mathematics and astronomy.

Carrying on this famous tradition is a remarkable young man in Iran named Mohammad Reza Shafizadeh, just 23 years old but already writing his name into the annals of science with bold strokes. He is closely linked to the Electric Universe initiative, and his story is a fascinating peek into a world and a scientific culture that we Westerners seldom have the opportunity of knowing. Mohammad is today one of the directors of the Persian division of The Thunderbolts Project, and how he came to attain this singular privilege is an intriguing tale, fit for the plot of a thrilling movie.

Because of political posturing on the part of the world’s nations, Iran remains essentially hidden and misunderstood, and the West seldom gets a feel for the reality of a part of the world that is known by many as the cradle of civilisation. In 2012, Iran was chosen to host the TWAN (The World At Night) 3-day international conference and workshop for astro-photographers and amateur astronomers. It was a good choice and laid a lot of preconceptions about the Persian heartland out to dry. The average age of an amateur astronomer in Iran is 18-20, and it’s very notable that females comprise half of the amateur astronomy community. Very few, if any, Western countries can match those statistics. One of the young people leading the charge in Iran is a great friend of Electric Universe.

Mohammad Reza Shafizadeh was born in Tehran in 1990, and except for two years when the family relocated temporarily to Dubai in the United Arab Emirates, has lived there all his life. His bent for science was already clear in high school, where he graduated in mathematics and physics. He enrolled in the Astronomical Society of Iran while still at school and was later chosen by the Education Minister of Iran as the year’s best high school researcher in astrophysics and cosmology. He went on to attain a diploma degree in those subjects and is currently in his final year of a bachelor’s degree in engineering physics at the Science and Research Branch of I. Azad University in Tehran.

Among his many achievements, Mohammad was a member of the Unprofessional Group of Crescent Sighting of Iran. The UGCS is the foremost crescent sighting group in the world, and it fulfills a very important function in Muslim cultural practice. In addition, he is executive director of the International Occultation Timing Association of the Middle East and president of the Physics Scientific Association of his university.

To support his studies, Mohammad found himself a variety of jobs, including teaching physics and astronomy classes. His deep interest in the history of science spawned a love of travel, particularly across the vastness and variety of his native Iran, where he can witness artifacts from the birth of civilisation and the foundations of physical science and astronomy. The bonus is that his sojourns in the desert provide peerless opportunities for night sky viewing.

Mohammad has a whole stack of publications and awards to his name, including essays detailing aspects of Iran’s rich astronomical heritage. The range of subject material in his publications reveals the breadth of his knowledge and interests—he has written about history (a comparison of modern and ancient Persian methods of calculating the Moon-Earth distance); technical matters (optical coating in telescopes); theory (methods for detecting exoplanets); and plasma cosmology (plasma discharge versus dirty snowball models for comets). 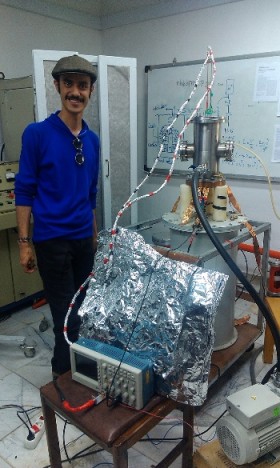 Mohammad Reza Shafizadeh with an experiment.

Clearly, Mohammad Reza Shafizadeh has physics in his genes, but the intriguing question is how he came to be so involved in the science of plasmas, and just how his connection with Electric Universe was born. While at school in Dubai, one of his father’s teaching colleagues gave astronomy classes after hours, and persuaded Mohammad’s father (a high school teacher) to allow the boy to attend. “He will see the sky through a telescope for the first and last time in his life,” joked the teacher, but young Muhammad took it very seriously indeed. He was determined to prove that teacher wrong and make his name as an astronomer one day. And indeed, he seems to be succeeding!

Most of us chart the peaks and valleys in our lives as the coincidental intersection of life-lines; so it was with Mohammad, too. It all began seven years ago with a remarkable friendship. That two people with the same name should fortuitously find each other and discover that they share a common interest in electrical plasma and cosmology stretches the notion of coincidence, but that’s exactly what happened. “Our” Mohammad Reza first met Mohammad Reza Shahjahan seven years ago at an observation night in an historical caravansary, and they became acquainted. Not long after that event, the two, still high school students then, attended a lecture on Big Bang Theory, and afterwards, both had searching questions for the presenters.The two Mohammad’s found through their questions and the unsatisfactory answers they received that they shared a measure of scepticism about the Standard Model of Cosmology, and so began a dialogue that has lasted to this day. They wondered whether the Big Bang Theory was the only plausible explanation for the cosmos we observe, and both of them had strong doubts. They realised that Big Bang rests primarily on mathematics, and the Universe we are discovering by observation and measurement needs a more satisfying explanation than pure theoretical modelling.

The following year, the two friends became students at university together, and their enquiring minds naturally led them to do research on alternative cosmologies. Inevitably, they soon came across the plasma cosmology model promulgated by the late Hannes Alfvén, and they were intrigued. The two pals decided to do something about it. It was an unacceptable state of affairs when a theoretical model dictated the interpretation of measurement, so they organised a seminar on “Problems of the Big Bang Theory” during which Mr. Shahjahan gave what is thought to be the first lecture on nonstandard models in Iran. The two lads found themselves at the forefront of a growing movement opposing orthodox dogma in their country and the world. It was a feat of considerable courage.

Mohammad Shafizadeh at this time gave classes in astrophysics to his fellow students in the Physics Scientific Association. In the course of preparing and translating lessons for their projects on non-standard models of the Universe, he found the Electric Universe and Thunderbolts websites. They had an immediate and profound effect on the young man; his curiosity was piqued, and the more he read, the more his questions were answered. In EU, Mohammad tapped into a stream of thought that aligned remarkably well with his own.

Mohammad’s inclination towards electricity and plasma in astronomy was further reinforced when he became acquainted with plasma physicist Dr. Yousefi, who was a professor in his faculty and an associate of Eric Lerner. Dr. Yousefi collaborated with Wal Thornhill on a paper about plasma physics, so he was well qualified to guide Mohammad through the cosmological minefield. The pieces of the puzzle were falling into place. In his own words, Mohammad describes the developments that resulted:

“Following all this, one of the members of our association and I wrote an article about comets that was accepted for the 6th Astronomy and Astrophysics Conference held by Astronomical Society of Iran. After that I spoke with Dr. Yousefi and my friend Mohammad Reza Shahjahan about the possibility of making a group for promulgating nonstandard models in astrophysics. All of us knew about the Thunderbolts group, and we liked it. So  Mohammad Reza and I decided to establish The Thunderbolts Project Persian Division (TPPD). I also filled the volunteer registration on the Thunderbolts website and after that Dr. Alireza Moayed sent me an email. I explained our purpose and so it happened that we started to do our teamwork. We choose The Thunderbolts Project because it had everything that we wanted. T-bolts showed us new horizons of science that allowed us to see our universe from another perspective. This team shattered the taboos and idols in science that have been worshiped at universities by teachers and students. We believe in its scientific purpose and we know it as a freedom movement in science. This is all that matters.”

Mohammad Reza Shafizadeh has broad interests and an eclectic library. He finds the rich historical tapestry of his country fascinating, and weaves it into his scientific philosophy. But he also has a strongly developed social conscience. He loves children—“they make our future”—and is deeply concerned about poverty. He shyly admits, “We must pay attention to poor families, poor children and orphans, their future is under threat. I work as a volunteer in a popular students relief society.” Clearly, he is an astronomer with a heart of gold, just like his inspiration in the Persian literature.

Mohammad is in his heart an empirical scientist, who believes that observation is the basis of scientific theory, not the other way around. His wonder at the cosmos is inspirational, and he is just as comfortable reciting line and verse from Persian astronomer, mathematician and poet Omar Khayyam as he is at the eyepiece of a telescope or in the strict confines of a physics lab. It is wonderfully appropriate for us to close this biography with a few lines of Khayyam:

The Moving finger writes; and having writ,
Moves on: nor all thy Piety nor Wit,
Shall lure it back to cancel half a Line,
Nor all thy Tears wash out a Word of it. 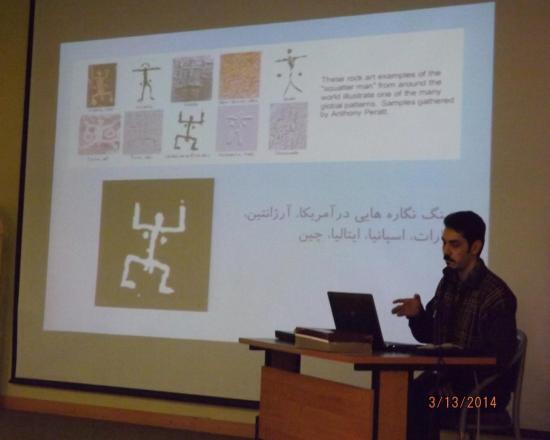 Mohammad Reza Shahjahan gives a talk on The Thunderbolts Project in March 2014. 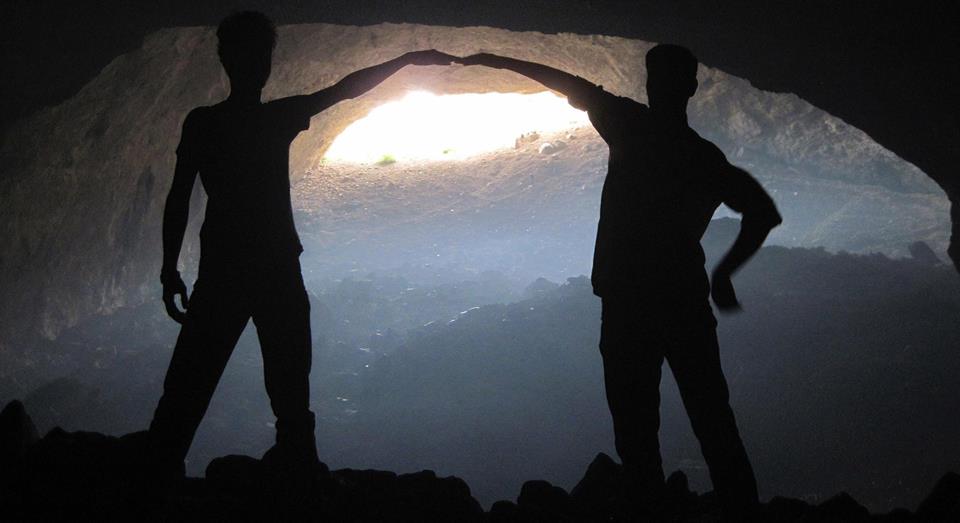