Home Picture of the Day Time Will Tell 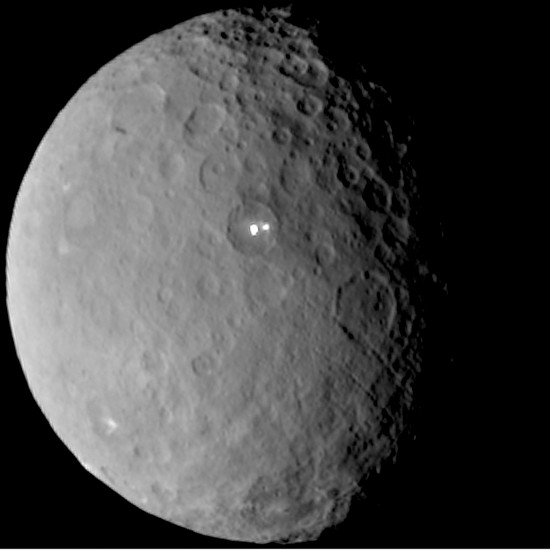 Two bright spots in a crater on Ceres. Credit: NASA/JPL

Ceres captured the Dawn spacecraft in its gravity field at a distance of 61,000 kilometers at 7:39 AM EST on Friday, March 6, 2015, after spending several months in orbits around asteroid Vesta.

Three ion propulsion engines enabled Dawn to ride continuous thrust for years at a time. Total thrust time during its travel to the middle Solar System was about 2,100 days. The ion engines accelerate ionized xenon more than 10 times the speed of conventional rocket engines, with a conservative use of fuel: only about 3.25 milligrams of xenon per second are expelled during maximum thrust. Dawn carries 425 kilograms of xenon onboard. According to NASA, over the course of the mission, the ion propulsion compares to the thrust from a Delta II rocket with all nine solid-fuel boosters, plus the Delta’s first, second and third stages.

Ceres was once known as the largest asteroid in the Solar System, until the Hubble Space Telescope put its diameter at approximately 975 kilometers, changing its attribution from asteroid to “dwarf planet”, along with Pluto, Charon and several recently discovered Trans-Neptunian Objects like Sedna.

At approximately 414 million kilometers from the Sun, Ceres takes 4.59984 years to complete an almost circular orbit, rotating on its axis every nine hours. One of the more interesting features on the dwarf planet is a pair of bright spots (see image at the top of the page) located inside one of its large craters.

According to a recent press release, “Ceres’ bright spot can now be seen to have a companion of lesser brightness, but apparently in the same basin. This may be pointing to a volcano-like origin of the spots, but we will have to wait for better resolution before we can make such geologic interpretations,” said Chris Russell, principal investigator for the Dawn mission, based at the University of California, Los Angeles.

There might be an Electric Universe explanation for the spots; something less speculative than “cryo-volcanoes”; perhaps the spots are similar to what was observed on Titan by the Cassini spacecraft. On July 8, 2009, the Cassini-Equinox spacecraft detected a flash of reflected light from Titan. It was speculated that the bright infrared spots were due to reflected light from Titan’s putative methane lakes. However, a past Picture of the Day proposed that the infrared light seen by Cassini was reflected by the hard, glassified crust left by an interplanetary plasma discharge.

Could the bright spots on Ceres be a specular response from glassified, electrically excavated pits? Since they seem to be there at different phases of its rotation, reflection might not be the answer: another phenomenon not yet considered could be causing the spots. Time will tell.