Home Picture of the Day Lesbos, Homer and the War of the Worlds

Lesbos, Homer and the War of the Worlds 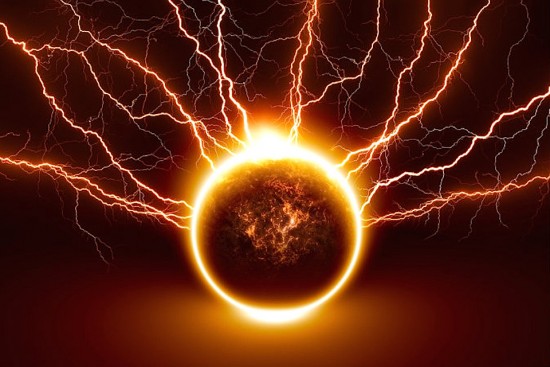 Did electrical activity devastate Earth in the recent past?

The hero, the resourceful and cunning king Odysseus, leaves a Troy shattered not only by war but by the vindictive gods of the Greek pantheon. Although the heroes of the Trojans and Greeks contribute to victory and defeat it is ultimately the battle between the gods themselves that decide the fate of these nations.

Many Electric Universe advocates maintain that those gods were sky gods, or planets in cosmic realignment. At the very least, others believe tremendous cosmic discharge events were occurring above the battlefield. They manifested in meteors and gigantic cosmic thunderbolts from the god Zeus (identified with plasma phenomena known as Peratt instabilities), earthquake storms, mega floods and tsunamis (caused by the god Poseidon) plagues and fire from the sky (initiated by the god Apollo) the shattering of cities and the butchering of men (due to the gods Aries and Athena).

Odysseus’s deadly homeward journey is delayed for many years by curious obstacles that to the modern reader seem beyond belief. The giant Cyclops, the mind controlling Harpies, the changing of men into animals!  But is there fact in these stories? Much of Homer is true. His grasp of geography was praised by the practical Strabo for its accuracy. His description of “the catalogue of ships” shows an in depth knowledge of the towns and navies of the Greek Mycenaean civilization. His grasp of human frailties matched Shakespeare’s. Do the fantastic elements in the stories merely reflect a world bathing in celestial effects unwitnessed by modern man? Regardless Homer’s writings reflect a world in chaos. Let’s examine and sift real proof that this 3000 year old Mycenaean era was an exceptionally catastrophic time for mankind! Let’s see if the Electric Universe can shed some light on this ancient “mythology”!

French archaeologist Claude Schaeffer showed that the rise and fall of Bronze Age civilizations was to be blamed on a series of six overwhelming natural catastrophes. These were staggered over a period of a thousand years! Their relative chronology was precisely recorded. Continent wide earthquakes storms, tsunamis, volcanoes, plague, drought, material deposition and dramatic and chaotic weather extremes moved together to destroy civilizations. Compared to our modern Christian era these catastrophes were terminal! Some of the consequences of these dreadful disasters even further decimated the human race. Pestilence, famine, war, plagues and race movements on a chaotic scale!

When Homer wrote the Odyssey (700 B.C.E.) the entire Mediterranean basin and beyond had just gone through a long series of such events. I suspect Homer was setting his Iliad and Odyssey around one of the last of these dramas. (Reflecting on Schorr’s revisionist evidence, 850 B.C.E is fairly accurate.)

But beyond this illustration of just how helpless civilizations can be to the whims of nature a more important question lies. What was the root cause of all this Earthly chaos? And in fact do lesser examples persist today and perhaps mold the human race? Schaeffer himself was perplexed and searched endlessly for this root driver. He also noted that before and after these apocalyptic series other, later but lesser echoes, could be detected in the archaeological record. Does the Electric Universe go some way to explaining the vagaries and magnitude of nature’s constant flux? If earthquakes are electrical discharges under the Earth were these massive continent wide earthquake storms Schaeffer documented, due to the discharge of a Peratt instability? Further if this is the case were these discharges in some way the cause of pestilence, famine, war and plague? Let’s travel to the Greek island of Lesbos in search of answers.

To prepare us let’s look at Schaeffer’s essential conclusions from many years of field work throughout the Middle East, India and Europe. In his complex work, “Stratigraphie  Comparée”, he concludes that there were six destruction layers throughout this entire area. The primary tool of destruction was the continent wide earthquake storm but equally savage were the attendant, Tsunamis, volcanoes, climate change, race movements, destruction by fire and inexplicable mass deposition of ash and till. Although the chronology is still contentious, amongst revisionist archaeologists, the most apt dating seems to be between 3500 and 2500 years ago. In other words from the early “Bronze Age” to the beginning of the “Iron Age”.

Schaeffer notes: “The great perturbations which left their traces in the stratigraphy of the principal sites of the Bronze Age of Western Asia are six in number …… In most countries occupancy suffered a notable reduction, in others sedentary occupancy was replaced by nomadic. In Palestine and the island of Cyprus the situation appears to have been complicated by epidemics …….Our inquiry has demonstrated that these successive crises which opened and closed the principle period of the third and second millennia were not provoked by the action of man. On the contrary, compared to the amplitude of these general crises and to their profound effects, the exploits of conquerors and the machinations of statesman at that time appear modest indeed.”

A profound example of Schaeffer’s discoveries was the ancient Syrian city of Ugarit on the Mediterranean coastline. It was only rediscovered prior to the Second World War. Its fine harbors finally came to an irrevocable end when an immense Tsunami completely buried it with till and rubble. Nearby Byblos echoes this scenario. Could Homer’s Troy have suffered a similar fate? When Schaeffer studied sites around Troy’s suspected location this was his conclusion. I have always doubted the placement of Hissalrick in Turkey as the original Troy of legend. Could Troy’s real location be under the sea as the ancient geographer Strabo maintains? Or is it deeply buried as with Ugarit? These questions we will leave for another day but before departing for Lesbos we should note another comment from Strabo. This is enlightening as it lends documented proof, from the ancients, as to the reality of these crises.

Strabo cites Democles: “who recalls certain great earthquakes some of which long ago took place about Lydia and Ionia as far north as the Troad (Gallipoli), and by their action not only were villages swallowed up, but Mount Sipylus was shattered, in the reign of Tantalus. And lakes arose from swamps, and a tidal wave submerged the Troad.”

Curiously the survivor of this catastrophe, Pelops, fled to Greece and founded new cities whence Agamemnon, leader of the Greek expedition sailed to Troy.

Lesbos lies very close to the Troy of legend. In fact one of the heroes of the Trojan war, Achilles, sacked the cities of Lesbos as had Hercules a generation before. The still existing castle of Molivos is said to be where one of these sieges took place. This was an era of what we would now call “high piracy”. Not only was Troy besieged but Homer tells us some twenty three other cities and towns were captured and sacked by Achilles alone. In other words chaos ruled in the Mediterranean basin.

Lesbos has two interesting phenomena that I think can enlighten us on the underlying cause of this chaos. A forest of petrified trees! Trees turned to rock! Secondly a sunken city in an inland sea. Major drama occurred in Lesbos. Are the two linked causatively and chronologically?

Near the north-west coast of Lesbos, running down a mountain, are the petrified remains of a redwood forest. The stony stumps are covered with thin layers of rounded pebbles, rock and till! They are generally broken off five foot above the root systems. Their huge trunks, around 60 foot long, are laying down hill as though cut off with a giant scythe. All are solid rock in brilliant colors with the fine structure of the wood delicately preserved with their root system. In other parts of Lesbos they can actually be seen beneath the sea shore. What force of nature not only converted the wood to rock but dumped rubble on them and also changed the depth of the shoreline? Wal Thornhill, in the attached film shows how a massive electrical discharge forms fulgurites in sand. Did the discharge of a Peratt instability turn these trees to rock?

Forty miles away is the ancient city of Pyrrha now totally buried under an inland sea that was obviously created at the same time? In other parts of the island fortifications and roads also lie under the sea. This is echoed all along the Egyptian, Syrian and Turkish coastlines of the Mediterranean and Black seas where submerged or buried ancient ruins are found. Strabo in his “geographies” actually documents large towns from this era, Bura and Rhypes that are no longer to be seen. He recounts they were struck by thunderbolts and then swallowed by the Earth! On top of this countless abandoned towns can be seen today that reflect a once bustling population. Megalithic cities, such as Mycenae, were destroyed and abandoned due to incredible forces no longer seen in our times

Do we control our destinies? Or is life like the roll of the dice – pure luck? Or are we playthings of either a chaotic or perhaps intelligent cosmos?