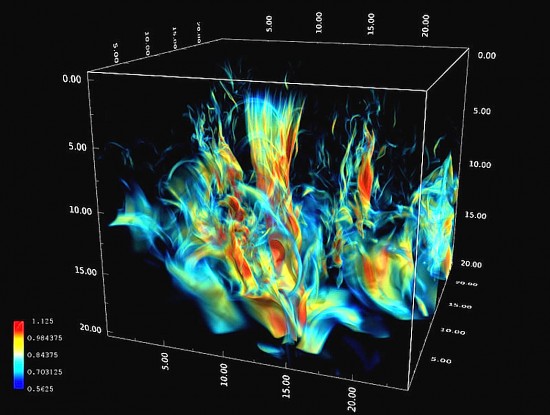 A model based on magnetohydrodynamics of the filamentary structure near the Sun’s surface. Credit: Robert Stein, Michigan State University; Tim Sandstrom, NASA/Ames

Do convection currents and vibrating magnetic field lines create the dynamic phenomena observed on the Sun?

As the electric model relates, sunspots, flares, coronal heating, and all other solar activity is most likely a result of fluctuations in electricity from our galaxy. Birkeland current filaments slowly move through the Solar System, energizing the electric circuit powering the Sun. The electric charge flowing out of the Sun is balanced by the opposite charge flowing into it, so perhaps the changes in temperature indicate the magnetic field polarity and the strength of the electric field. If the Sun is connected to the rest of the galaxy by Birkeland current “transmission lines,” then its puzzling characteristics with respect to conventional interpretations are most likely demonstrating the fluctuations in current arriving from the Milky Way’s electric generator.

According to the thermonuclear fusion model of the Sun, hydrogen in its superdense core is being crushed with so much force that it is converting to helium, releasing tremendous amounts of energy. The temperature in the core is thought to be 15 million Celsius, with compressive strain greater than 340 billion times Earth’s atmospheric pressure. A common metaphor used to illustrate the process is to imagine millions of hydrogen bombs exploding all at once within a confined space: 700 million tons of hydrogen are said to be converted into helium every second.

The Sun’s surface is known as the photosphere. Above that surface layer is the chromosphere, and above that is the corona, the outermost part of the Sun’s visible atmosphere. The photosphere averages 6000 Celsius, while the corona can be as much as two million Celsius! This is the great mystery that has encumbered researchers. How is it that the hottest region of the Sun begins at an altitude of 4000 kilometers and extends over a million kilometers from its surface without any significant temperature drop?

Many ideas have been proposed for how this steep temperature rise occurs. Some research groups have concluded that it is the “rearrangement of magnetic field lines,” otherwise known as “magnetic reconnection,” that is causing the heating. Both the SOHO and TRACE satellite observatories have detected small, rapidly changing magnetic regions on the Sun’s surface.

It has been suggested that “reconnection events” within those fluctuating fields continuously heat the solar corona. The problem with that theory is that no one has ever observed magnetic field lines “reconnecting.” As Electric Star theory proponent Professor Donald Scott has repeatedly stressed, no one ever will.

Another potential explanation for the solar corona’s extreme thermal radiance is that convection on the Sun’s surface causes magnetic field lines to oscillate. As the field lines move up and down, waves travel along them, eventually moving outward into the corona where (presumably) sufficient kinetic energy heats it up.

The Sun’s inverted temperature gradient can be explained by the Electric Star theory because it conforms to an electric discharge within the z-pinch zone of intergalactic Birkeland current filaments. The Sun is a gigantic electric arc, not a ball of hot hydrogen gas. Therefore, the energy of the Sun is focused from outside and not expelled from inside.

As Electric Universe advocate Wal Thornhill wrote: “The chromosphere has a strong electric field which flattens out but remains non-zero throughout the solar system. As protons accelerate down the chromospheric slope…they encounter turbulence…which heats the solar corona to millions of degrees. The small, but relatively constant, accelerating voltage gradient beyond the corona is responsible for accelerating the solar wind away from the Sun.”