Home Picture of the Day The Colors of Thought

The Colors of Thought 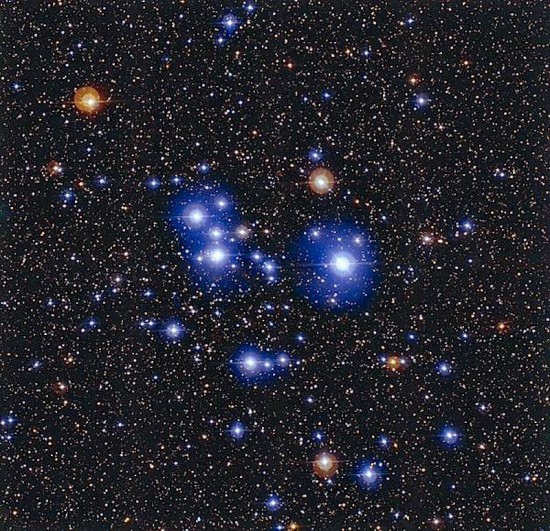 M47 is an open cluster of fewer-than-usual stars.

The contrasting colors of blue and red have an aesthetic appeal. One can even detect a few orange and yellow stars. A person may glimpse an occasional green one, especially if that person fiddles with the RGB settings in Photoshop.

Astronomers talk about the colors, too, but what they have in mind is not RGB settings; it’s λmax, the wavelength of maximum luminosity in a star’s spectrum. They plug that number into an equation, such as Planck’s, to get another number for temperature. This ties the color to the temperature, which we understand from experience: a yellow flame is usually hotter than a red one, and a blue one is hotter than both. The temperature, in turn, is tied to the theory of stellar evolution.

Alternatively, astronomers can measure the total luminosity of a star and use Stefan’s Law to get a temperature. Planck’s equation (which gave rise to quantum physics), as well as Wien’s Law and Stefan’s Law, are all derived from Kirchhoff’s Law, which Kirchhoff proclaimed in the 19th century after conducting many experiments with the light emitted from cavities.

To a man (and the few women involved), they ignore the assumptions underneath it all. As it turns out, this is fatal. If they were doctors, all their patients would have died. Let’s turn over Stefan’s Law and see what’s underneath it. The law states:

where π is the ratio of the circumference to the diameter of an Euclidian circle, k is the Boltzmann constant, ℏ is Planck’s constant, and c is the speed of light.

They’re empirical. They were measured. In the real world. The one that goes bump in the night.

So one might ask, how did they come to cross over into the conceptual world? Two of them came from Kirchhoff’s experiments in the 19th century—or rather from his assumptions about his experiments. He measured the spectral distribution of emission from cavities. He found that it varied with the temperature. To clarify the relationship, he sprinkled soot into the cavities. He concluded that the radiation was “independent of the form and nature of the bodies, being determined by T alone.”

Later, Stefan and Wien and Planck refined the relationship, and the refinements produced the k and ħ that appear in σ—all from experiments with the emission from cavities, all of which were sprinkled with soot. Without the soot, the relationship wasn’t as clear. It was actually far from clear. In fact, what was clear was that every material had a unique relationship. Kirchhoff’s Law was not universal, it was merely the law for soot. It would be better named Kirchhoff’s Error.

This could make one suspicious of σ. What about the other constants? c, it turns out, seems to have been decreasing since it was first measured, and by an amount greater than the precision of the measurements: it can’t be dismissed as experimental error. π is surely sacrosanct. But if you draw a circle around an egg and measure the diameter over the top, the ratio is closer to 1 or 2 than 3.14. You say: I must measure across the flat plane of the circle. I say: in the real world, the one that goes bump in the night, show me a flat egg.

The ideal is a world we can be sure of—π! k! ħ! c!—known to a dozen or more decimal places. But it’s a ghost world, insubstantial (meaning, not composed of substance, immaterial). And the world we live in, that we bump into, that knocks against our shins as we stumble around in the dark, that one tells us only that some mysterious thing hurts. Between the pain and the ghost, there is only thought.

So what shall we think? There’s nothing of confidence left of Stefan’s Law except 2/15—and now I’m suspicious of that.