Home Picture of the Day The Dark Energy Survey 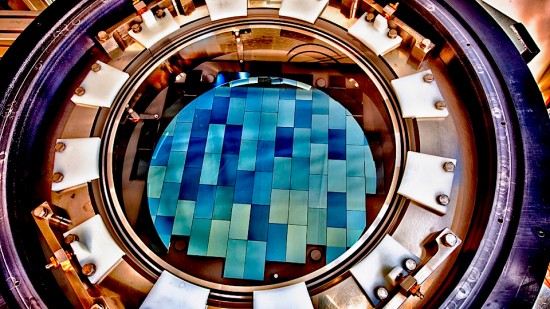 The expansion of the Universe is said to be speeding up.

In 1997, two teams of astronomers were studying Type 1a supernovae, when they found that there was “something wrong” with their data.

By way of background, a supernova is conventionally described as a massive star that has reached the end of its lifecycle. Stars are thought to form when cold gas and dust coalesce to the point where they reach a critical threshold. At that moment, gravitational acceleration toward a common center becomes great enough to crush the material into a zone so hot and dense that thermonuclear fusion occurs and the star begins to shine.

Since a star is primarily composed of hydrogen, nuclear reactions in its core fuses that hydrogen into heavier elements: first helium. Then, when temperatures in the core reach about 100 million Kelvin, helium’s kinetic energy is strong enough to overcome electrostatic repulsion, so it fuses into carbon-12 in a so-called “triple alpha process“. After carbon-12, other exotic fusion reactions occur as the star ages, until finally it reaches a stage where nickel-62 nuclei begin to accumulate in its core. Nickel-62 has the highest binding energy per nucleon of any elements, so it can no longer be fused into heavier elements no matter how hot a star’s core might become.

The accumulation of this heavy “ash” essentially halts fusion, so radiative pressure is no longer able to hold back the force of gravity that always wants to crush the star. Suddenly, the star’s outer layers catastrophically collapse, rebounding off the core out into space in what astronomers call a supernova explosion.

Type 1a supernovae are a sub-class of these stellar explosions involving binary stars, but they are thought to occur through a different process. Their particular way of exploding is still considered a mystery in astrophysical circles, but a possible mechanism is described in this fashion by the Swinburne Centre for Astrophysics and Supercomputing:

“What is agreed is that as the white dwarf gains mass from its companion, it contracts and increases its temperature and density. As the mass approaches the Chandrasekhar limit of 1.4 solar masses, the temperature and pressure in the interior of the star is such that a burning front is formed, where carbon is fused into iron and nickel almost instantaneously. It is what happens next that astronomers are still investigating.

“The most popular theory is that the white dwarf undergoes a delayed detonation, where this burning front is initially subsonic (deflagration) but later becomes supersonic (detonation). The observed explosion energies and the quantities of unburnt carbon andoxygen rule out a pure deflagration scenario, and the fact that the whole star is not burnt to iron and nickel rules out a pure detonation scenario. By combining the two ideas,astronomers can model the explosion energies and the distributions of elements observed in all Type Ia supernovae by altering when the transition from deflagration to detonation occurs.”

To continue, in 1997, Adam Riess and Saul Perlmutter were studying Type 1a supernovae because their rise in luminosity and their subsequent decline are considered predictable. That measurement is a way of determining a supernova’s true brightness or “absolute magnitude“. Then, by calculating the supernova’s redshift, they can place it in space-time coordinates and find out how far away it is.

When Riess and Perlmutter crunched the numbers from their observations, they were shocked to discover that the recessional velocity (redshift) of the most distant Type 1a supernovae indicated that they were accelerating. And not only that, the farther away they were, the faster they were speeding up. This effect was called “dark energy” because no apparent cosmic influence could be seen. As time went on, new observations by various groups resulted in the conclusion that dark energy makes up 75% of the Universe.

The Dark Energy Survey project expands the effort at identifying what dark energy is. More than 120 astronomers and other scientists analyze observations of the southern sky using equipment such as the Dark Energy Camera. It will record images of over 300 million galaxies, so that a more precise determination of the hypothetical expanding Universe can be made.

Dark energy is another of the phantoms that arise when redshift is applied to observations. Redshift has been the bane of astrophysics since Hubble first identified what he thought was the Doppler effect in images of faint galaxies. Instead of seeing redshift as an effect of acceleration and distance, it may be that it is an intrinsic property of matter. AstronomerHalton Arp proposed that idea many years ago, and it deserves further investigation, especially when anomalous observations are considered: high redshift objects in front of low redshift objects, for example.

“All of the ‘dark’ things in astronomy are artifacts of a crackpot cosmology. The ‘dark energy’ model of the universe demands that eventually all of the stars will disappear and there will be eternal darkness. In the words of Brian Schmidt, ‘The future for the universe appears very bleak.’ He confirms my portrayal of big bang cosmology as ‘hope less’.” —Wal Thornhill