Home Picture of the Day Faster Than Light: Part Two 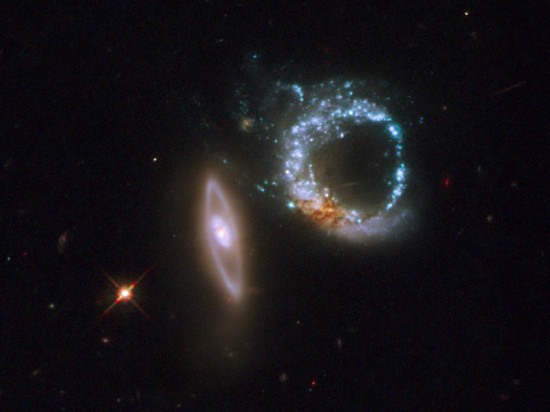 If distance calculations based on redshift are inaccurate, what does that mean for the consensus opinion about the age or the size of the Universe?

In the 1960s astronomers discovered quasi-stellar objects, better known as quasars. They have extremely large redshifts, implying that they are located near the farthest edge of the observable Universe. Quasars are referred to as “quasi-stellar” because they are relatively small, often little more than a light-year in apparent diameter, at their assumed distance, yet emit so much energy that they are thought to be the most powerful continuously radiant objects in the Universe.

The only other active energy sources detectable at such vast distances are gamma ray bursters (GRB). However, GRBs last for mere minutes, whereas quasars shine continuously in output. They remain as bright as when then were first discovered.

Some astronomers soon found that many quasars are associated with spiral galaxies (like M82) and appear to be near the galaxy instead of billions of light-years distant. Based on other data, such as quasars’ anomalous apparent brightness when compared with their redshifts, Hubble’s expanding Universe theory was called into question.

Long before the quasar problem arose, though, Edwin Hubble himself was moved to suggest that inflation might not have taken place in the “early” Universe. He thought that new observational data was necessary in order to decide whether it was definitive. In 1947, he was waiting for the new 200-inch telescope at Mt. Palomar to be built:

“It seems likely that redshift may not be due to an expanding Universe, and much of the speculations on the structure of the universe may require re-examination… We may predict with confidence that the 200-inch will tell us whether the red-shifts must be accepted as evidence of a rapidly expanding Universe, or attributed to some new principle of nature.” (Publications of the Astronomical Society of the Pacific Vol. 59, No. 349).

Unfortunately, nothing definitive has resulted from astronomers working with the Hale telescope or the many space-borne telescopes that have been launched since then. Instead, redshift and inflation have become something of a dogma among the astronomical community and new, ever more arcane mathematical excursions have been added to the mix, as was discussed in part one.

Although many observations contradict the consensus view, and have been doing so for 40 years or more, those data are ignored or marginalized. High redshift quasars, as previously mentioned, are found in axial alignment with galaxies that possess substantially lower redshift. Indeed, they are sometimes connected to those lower redshift galaxies by “bridges” of luminous material.

Halton Arp was the lone voice among a crowd of scientists who conformed to the standard Big Bang model when he began to publish papers that did not demonstrate that inflation—or the Big Bang hypothesis—was valid. As Edwin Hubble predicted, Arp’s research using the 200-inch Hale reflector demonstrated “some new principle of nature.”

One of the more interesting images that substantiates the need for a revised cosmology is NGC 4319 and its companion quasar, Markarian 205. Arp called attention to the fact that the lower redshift galaxy is physically connected to the higher redshift quasar. A filament between the two objects violates the measured distances because no such connection should be possible. After all, NGC 4319 (from redshift calculations) is said to be about 600 million light-years from Earth, while Markarian 205 is around a billion light-years away.

If these objects are physically connected they must reside locally with each other at the same distance from Earth. The discrepancy in their redshifts has to be from some other factor not related to their distances—there must be something intrinsic to their makeup that leads to the deviation.

Arp assembled a Catalog of Discrepant Redshift Associations that describes anomalous structure or physical links among objects with radically different redshifts. Some of the observations show quasar pairs being ejected in opposite directions from active galaxies. This led to the so-called ejection model of galaxy formation. In brief, high redshift quasars around galaxies, such as the aforementioned M82, are the “daughters” of the mature galaxy. Their various redshifts do not indicate distance, but age from the time of ejection.

Arp speculates that the redshift measurement of quasars is composed not of a velocity value alone, but also depends on what he calls “intrinsic redshift.” Intrinsic redshift is a property of matter, like mass or charge, and can change over time. According to his theory, when quasars are ejected from a parent galaxy they possess a high intrinsic redshift, z = 2 or greater.

As the quasars move away from their origin within the galactic nucleus, their redshift properties begin to decrease until they reach somewhere near z = 0.3. At that point, the quasar resembles a galaxy, albeit a small one. The inertial moment of ejection is eventually overcome and the mass of the quasar increases while the speed of ejection decreases, until it may become a companion galaxy. It is in that way that galaxies form and age, evolving from highly redshifted quasars, to small irregular galaxies, and then into larger barred spirals.

Other examples of fast-moving quasars in front of slower moving galaxies, or connected to them with luminous filaments, have been observed. NGC 7603, for instance, a distorted spiral galaxy with a single arm, is joined by that arm to a smaller companion with a much higher redshift. Within the bright material of the arm are two other objects, each with redshifts different from the galaxy pair.

There is nothing conclusive in the mainstream scientific journals about Arp’s data as of this writing. His telescope time was cut off many years ago by the decision makers who allot that time to various research groups. His revelations concerning problems with consensus dogma were considered too intolerable, so he was summarily censured by his peers. However, the evidence he continues to gather and promote ought to make us stop and think: is the Big Bang dead? How big and how old is the Universe if redshift readings are not reliable indicators of distance?