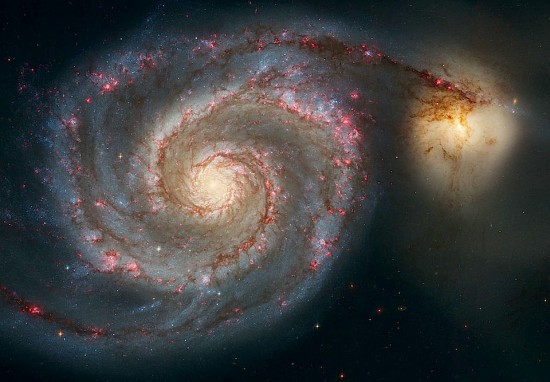 The image at the top of the page is a composite. It is made up of optical data from the 0.9-meter telescope at Kitt Peak National Observatory and one from the Hubble Space Telescope. The highlighted red features are areas that are thought to be “star-forming regions”. Infrared wavelengths seen by Hubble’s Near Infrared Camera and Multi-Object Spectrometer (NICMOS) revealed M51’s dust lanes to be smoother, with fewer “clumps” than astronomers expected.

On August 25, 2003 NASA launched the Spitzer Space Telescope into an Earth-trailing orbit. Spitzer’s primary “cold mission” used a tank of liquid helium to keep infrared detectors at -268 Celsius, allowing it to see infrared wavelengths as long as 180 microns. For comparison, the deepest red light frequency visible to the human eye is approximately .75 microns. Spitzer continues to probe the dusty environment of deep space, although it is now limited to the 4.5 micron range.

The Herschel Space Observatory was similar to Spitzer, except that it possessed the largest mirror ever launched into space: 3.5 meters in diameter. Like Spitzer, Herschel’s helium coolant was designed to last for three years, starting from its May 14, 2009 launch date. However, because of careful management, it survived until April 29, 2013. Both telescopes also focused their lenses on M51.

One of the more interesting aspects of the Whirlpool Galaxy is that more supernovae are found there than in any other galaxy. Why is not known to the consensus astronomical community, but Electric Universe proponents might be able to provide some insights.

Previous Pictures of the Day have explained that an electric discharge in a plasma cloud can create a double layer, or sheath, along its axis. Electric currents flow along the sheath. Those currents spiral into filaments, or double layers, which attract each other. Instead of merging they twist around into a helix, gradually pinching down into powerful electric discharges. A star is born when those discharges reach the arc-mode state—the more intense the electric current the bluer, larger, and more energetic the star. M51 is in a highly energized state, so it is rapidly creating stars in its filamentary dust lanes.

As early as 1981, Hannes Alfvén published ideas about his “electric galaxy” theory. Alfvén thought that galaxies resemble homopolar motors. A homopolar motor is driven by a radial electric current in a circular metal disk. When the disk is placed between the poles of a magnet, interacting magnetic fields cause it to spin at a rate proportional to the input current.

Galactic discs behave like those conductive plates. Birkeland currents flow within them, powering their stars. Galaxies are, in turn, powered by intergalactic Birkeland currents that are detectable by the radio signals they induce. Since Birkeland currents are drawn toward each other in a 1/√r relationship, they are the longest range attractors in the Universe.

It was Winston Bostick who proposed mechanisms by which galaxies are electrically created, as well as how they generate active regions where star birth might take place. Since galaxies that are capable of creating stars at a rapid rate are those experiencing the greatest electrical input from cosmic Birkeland currents, then it stands to reason that they are also going to be those where the largest number of supernovae occur.